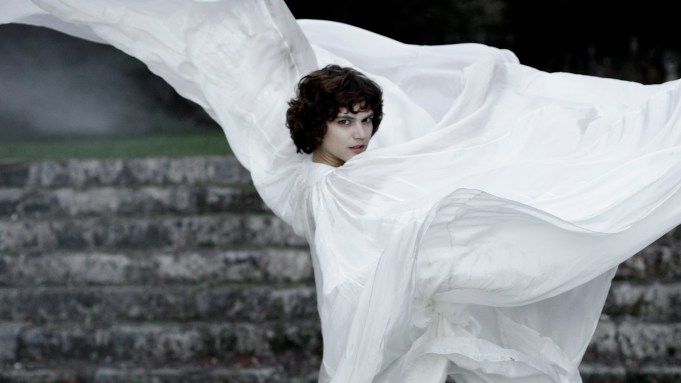 PARIS — French actress and singer Stephanie Sokolinski, better known as Soko, has added movement to her list of talents.

The 30-year-old stars in Stéphanie Di Giusto’s “La Danseuse,” (or ‘The Dancer’ in English) in which Lily-Rose Depp, Mélanie Thierry, and Gaspard Ulliel also star.

She plays the role of American performer Loïe Fuller who became France’s muse with her modern dance using theatrical lighting techniques during the Belle Époque.

Set to release in France on Sept. 28 during Paris Fashion Week, the film debuted in the “Un Certain Regard” competition at the Cannes Film Festival last May, with Depp making her Cannes debut with her role as Isadora Duncan.

A frequent fixture in fashion’s front rows, Soko also appears in another film that came out earlier this month, “The Stopover,” and she’s incubating her third album. Over the phone from Bordeaux, her home town, she talked about going to high school with Olivier Rousteing; playing opposite Depp; and wearing silk dresses created by costume designer Anaïs Romand.

WWD: You were born in France and you’re based in Los Angeles.
Soko: I have been living in L.A. for nine years. L.A. is home. I love it. It’s big and work-driven but also very health conscious. I love hiking and I love being in nature, being able to go to the ocean or drive to Big Sur, do things that keep me grounded and be surrounded by nature. Right now, I have to be in Europe to for one month to promote both films, which is great. I am happy wherever I am. Home is wherever my suitcase is. Right now, I’m in the south of France because I am premiering my movie in Bordeaux, my home town, on Monday. I’m happy that 10 people from my family can come.

WWD:  Speaking of Bordeaux, you were in the same high school as Olivier Rousteing.
Soko: We were in the Lycée called Montesquieu. He was my best friend. We were both from the countryside so we both had to do the commute to the big city together, which was like half of hour of bus or sometimes my mum would take us. He and I were both the weirdos, the loners, who knew what they wanted to do, didn’t have many friends. We only had each other.

WWD: Are you still in touch?
Soko: We both travel so much that it’s hard to see each other. I am really proud of him because he has always wanted to be a designer as far as I can remember and I still have charcoal drawings that he made of beautiful women with crazy outfits when he was 15. He already had such an amazing touch and taste.

WWD: What do you wear these days?
Soko: I wear a lot of vintage. Also, I have been lucky enough to be spoiled by Gucci recently. The first time they dressed me was for Cannes. I went to the shows. I’m in love with every single piece of the collections. I think [Alessandro Michele] is a genius. I feel every piece is made for me. They sent me a new jacket two days ago. I asked them if they could put a cat in the back because my name is SoKo the cat. It’s the most beautiful piece of clothing I have ever dreamt of, let alone owned. I cannot believe that they made it for me. I don’t think it’s ever gonna leave me ever.

WWD: What’s your third music album like?
Soko: I started already. I spent the whole month of July in New York doing just that. I had to put that on hold just to do [film] promotion. The music sounds like if you lay on a bed and you look on someone’s eyes and you feel that you’re falling in love for the very first time. It’s dreamy, mellow and feels emotional and vulnerable and hopefully it sounds pretty. A friend of mine is playing the guitar in it. It will come out when it’s ready. Because making it is my favorite part of it, I don’t want to rush it.

WWD: Can you tell us about preparations for “The Dancer”?
Soko: This took over my life. I had to train seven hours a day for two months for the film and during the film. I felt so lucky that I could play such an incredible historical character that was forgotten and bring her back to the light that she deserves. I had a choreographer Jody Sperling who came from New York and she spent the last fifteen years of her life solely performing the body of work of Loïe Fuller. She was so generous with me. She shared every little bit of her secrets and knowledge not only to me but to the whole film. We really need someone like her to make the film look as authentic as possible.  She was a dream teacher. It really took that woman to turn me into a dancer because it was not written in the stars for me.

WWD: What is Fuller’s legacy?
Soko: Loïe Fuller is the one woman who changed the world of dance. It’s the beginning of contemporary. It’s these abstract shapes and she refused to be a ballet dancer. She never wanted to do that because her whole thing is that she doesn’t like showing herself, has confidence problems, didn’t want to be seen and she is an artist so there’s this paradox, that she made that her strength. So she dances in this super long dress and she makes shapes out of it, and also projects colored lights on her dress so it looks like —whatever you want to project flowers, butterflies— it looks alive. The whole time, she’s hidden behind that.

WWD: You’re the one who wanted to bring Lily-Rose Depp on board?
Soko: I suggested her because I knew her from L.A. and we’re friends and I thought that she was the right age and had that sort of natural charisma to herself that is very rare to see in a 16-year-old. We auditioned a few girls. When we did act together, it was mind blowing how natural and already, she had this born-a-star kind of charisma; the camera loves her, she’s gorgeous and elegant.

WWD: Did she train as well?
Soko: She did train but it was different. I didn’t have a double because I had a lot more time to train. Lily’s part is smaller and she also was also doing another film at the same time [“Planetarium”]. So obviously she didn’t have as much time to train. We used a double for Lily. But she did have to train. She had to learn choreography.

WWD: Were the dances hard to perform?
Soko: It was hard every single day. You’re teaching you body how to become an instrument. I discovered muscles that I didn’t know existed. I personally never get used to that pain. It’s a true portrait of what it is to be an artist, all the obstacles, the physical and emotional pain; sometimes being so passionate that you loose yourself in your art. I feel that’s very true for every artist.

WWD: What were your favorite costumes in the film?
Soko: They reproduced the dress but it’s so hard to work with silk and the dress had to be perfect because that’s what makes the dance. We had a couple of dresses because we had the final one that we ended up using in the big dances. They did an incredible work. Also Stephanie the director loves costumes. She was really picky with what she wanted. She said  ‘Loïe doesn’t care about fancy clothes; all of her passion goes into her art.’ But one day in the film, there’s a press conference that Loïe has to hold —that’s real because we have pictures of it — she made a whole dress out of fresh flowers. That was my very favorite costume. Anaïs [Romand] and the girls made this incredible silk dress, hand sew,, they made flowers out of fabric but they hand sew them one by one, and also made a hood, this tiny hood that looks like a bathing suit from that time. It has flowers everywhere. It’s the most gorgeous thing.