The Los Angeles activist set donned their fall tweeds for the NRDC Action Forum’s “Ecosalon” … What they wore to the Ramones benefit. 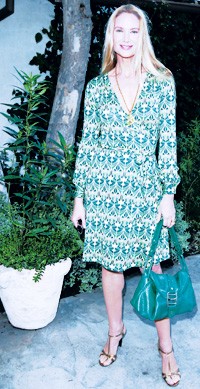 On Friday, the Los Angeles activist set donned their fall tweeds for the NRDC Action Forum’s “Ecosalon” at Brian and Gigi Grazer’s home, which educated guests about pollution and pesticides. “Lunch is just the bonus because this is really about awareness,” said forum co-founder Elizabeth Wiatt. “And having expert speakers really elevates the level of conversation, which usually degenerates to subjects like potty training.”

Los Angeles native Rita Wilson, there with Heather Thomas Brittenham, Kelly Chapman Meyer and Laurie David, said, earnestly, “It’s encouraging to know that we have the power to keep the world clean. To quote Maria Shriver, ‘We are the ceo’s of our lives.’”

This story first appeared in the October 26, 2004 issue of WWD. Subscribe Today.

Hollywood continued to champion good causes over the weekend, with the 16th Carousel of Hope Ball the next night. The biannual star-fest benefits the Barbara Davis Center for Diabetes. “I hear this is the best of the charities, which it obviously is,” said Mischa Barton at the Beverly Hilton, a tip she no doubt picked up from her boyfriend Brandon Davis’ grandmother.

The evening honored Halle Berry with the Brass Ring Award. Of her pals Oprah and Beyoncé, who entertained the crowd, Berry, said “I’m a woman’s woman so I love being around really talented, strong, smart human beings, and they’re all of that.” Berry also took some style tips from her idol: “When they asked Oprah what she was wearing at the Academy Awards, she said, ‘My diamonds, darling, mine.’ So I’m trying to start wearing my diamonds, darling, mine.”