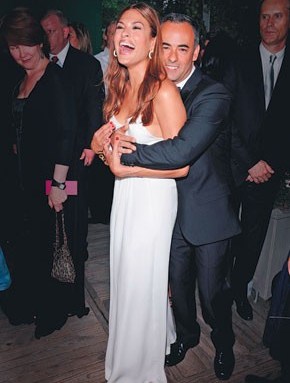 The heat was on at Monday night’s CFDA Fashion Awards, as designers and VIPs crowded the area behind the New York Public Library. “This is already fun,” said Francisco Costa, who took home the Womenswear Designer of the Year Award for Calvin Klein Collection. Tom Ford won the Menswear Designer of the Year Award, while Tory Burch was honored as Accessory Designer of the Year. Candy Pratts Price received this year’s Eugenia Sheppard Award. The International Award went to Dries Van Noten, and Mayor Michael Bloomberg was given the CFDA’s Board of Directors’ Special Tribute. The Swarovski awards for emerging talent, meanwhile, went to Kate and Laura Mulleavy for Rodarte for Womenswear, Scott Sternberg for Band of Outsiders for Menswear and Philip Crangi for Accessory Design.

But the fashion crowd paid homage to one of their own in another way as many attendees showed up in versions of the late Yves Saint Laurent’s le smoking. “When I have something important to do I always wear a white smoking,” explained Carolina Herrera, the night’s recipient of the Geoffrey Beene Lifetime Achievement Award.

CFDA president Diane von Furstenberg chose to wear a jacket Saint Laurent crafted 30 years ago. “I had a dress made for tonight but then I called my country home and asked them to send over all of my Yves Saint Laurents,” she said.

Of course, some people are accustomed to forgoing frocks on such occasions. “The last time I wore a dress was to a friend’s wedding when I was 19,” said Fran Leibowitz, the evening’s emcee.

BLOOMBERG PHOTO BY JAMIE MCCARTHY/WIREIMAGE; ALL OTHERS BY KRISTEN SOMODY WHALEN AND STEVE EICHNER