The flashbulbs went into overdrive at the Council of Fashion Designers of America awards and dinner Monday night as Kate Moss,... 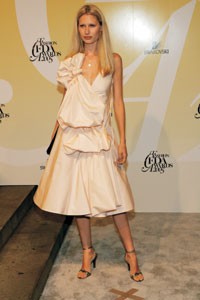 The flashbulbs went into overdrive at the Council of Fashion Designers of America awards and dinner Monday night as Kate Moss, Catherine Deneuve, Ralph Lauren, Diane von Furstenberg, Norma Kamali, Carolina Herrera and Donna Karan, among many others, made their way up the New York Public Library steps and into a surprisingly carpeted foyer, first for cocktails and then to watch the rest of the arrivals on a huge Swarovski-adorned screen.

Vera Wang won the women’s wear designer of the year award and John Varvatos received the prize for men’s wear.

Marc Jacobs captured the prize for accessory designer of the year.

The awards were underwritten by Swarovski, and Swarovski’s Perry Ellis Award went to Derek Lam for women’s ready-to-wear, Alexandre Plokhov for Cloak for men’s wear and Anthony Camargo and Nak Armstrong for Anthony Nak for accessory design.

Von Furstenberg received the Lifetime Achievement Award, and Kamali took the Board of Directors’ Special Tribute. Gilles Bensimon, publication director of Elle, was honored with the Eugenia Sheppard Award. Alber Elbaz, artistic director of Lanvin, was given the International Award, while Moss picked up the Award for Fashion Influence.

“I was actually very nervous, although I never get nervous,” von Furstenberg said. “I didn’t know which dress to wear, which shoes to put on. It’s quite something to be honored by your peers.”