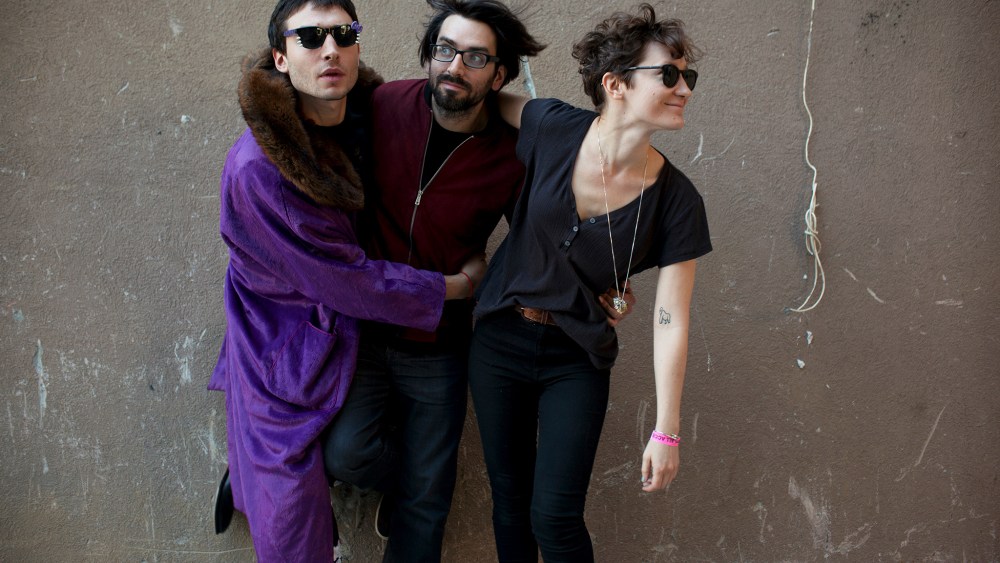 It was less than 24 hours into their tour, and Sons of an Illustrious Father was already back home — sort of.

“We haven’t been home yet, though — we’ve only been here today, so it doesn’t quite click that we’re in Brooklyn,” says Lilah Larson from the green room at music venue Elsewhere in Bushwick, Brooklyn. The trio, who kicked things off in D.C. the night before, had just finished sound check for their show later that night, and was settling into their stack of slices from the nearby eatery Pizza Party.

Pizza, photo shoot, interview — in the world of Sons of an Illustrious Father, the band seems to tune every moment possible to their liking. They’ll answer your questions, but they’ll quickly pivot their way to conversation that seems primed for their own intimate, personal language. For example: In reaction to all of the afternoon activity, Josh Aubin — who makes up the band along with Larson and actor Ezra Miller, who is downstairs helping one of the opening bands with their drum setup — is feeling “a little frazzle rocked.”

Let us translate: It’s a “Fraggle Rock” joke. “‘Fraggle Rock’ is an amazing Jim Henson TV show that aired for many seasons and it’s so deep in its lore and world,” Aubin explains.

“It’s about these little creatures that lived in a cave,” Larson chimes in.

“Yeah, and then the cave is connected through a dimensional portal to a human world, where this dog lives.”

“And then there’s the other world where they actually live in, where there are big things that eat them, and there’s this trash monster goddess.”

Now that’s out of the way.

The band was setting out for a three-week tour in the wake of the release of their album “Deus Sex Machina; Or, Moving Slowly Beyond Nikola Tesla” earlier this month. Their music has been described as “art rock,” “alternative,” “indie” and the trio, who trade off instruments and singing roles, is similarly difficult to put into a box. Their latest songs deal with, as Miller puts it, “Little stuff. Birth. Sex. Birth sex, death.” Right.

“We do think, though, the album that we just released is much more expansive in scope, and the songs we’ve been working on recently are more intimate,” adds Larson. “We’re kind of returning to…”

“Birth, sex and death,” Miller repeats. “Being born was crazy and beautiful, sex continues to be interesting, death is coming soon, and birth and more sex will presumably follow.”

Their music also aims to be inclusive, particularly for LGBTQ youth. One stop on their tour, in Cleveland, came with an unusual age limit: 20 years and younger; adults must be accompanied by a minor.

“We may be the pioneers,” Larson says of the approach. “We’re trying to do more of those as much as possible.”

The band has had plenty of time to cultivate their closeness. Larson and Miller have known each other since middle school in New Jersey, and Aubin — while an early-in-adulthood addition — seems to fit seamlessly into the mix.

“We’re different sizes, and so we’re kind of like a Russian doll,” Miller says. “When it’s time to go to sleep, Lilah gets inside of Josh, Josh gets inside of me, and you close up the doll and we rest ourselves up on the mantel. What’s inside the tiniest Russian doll, did you ever wonder that?”

“A tiny Russian doll that is hard all the way through,” offers Larson.

Miller presses further. “What’s inside that one, the one that can’t be opened?”

“The largest Russian doll,” says Aubin, to his bandmates’ satisfaction. “It’s like a cycle.”

The band operates as a singular unit, and when asked how they manage to make space for it all, Miller — who balances the band with his other career, as an actor with roles in major film franchises — notes that it comes down to will.

“Band time is work time, but it’s also family time,” he says. “And so we support each other immensely in achieving our other goals, and we work hard to accommodate each other’s schedules. But the time always does get carved out, and definitely our mutual willingness to follow each other and position ourselves convenient to the tasks of the others affords us more time together.”

The dedication pays off. For Miller, that came in the form of a pair of purple sunglasses which were practically glued to his face.

“I just got them today actually. At a gas station. These are some of the great fruits of tour,” he says. “It was Lilah’s selection, and I wasn’t sure at first.”