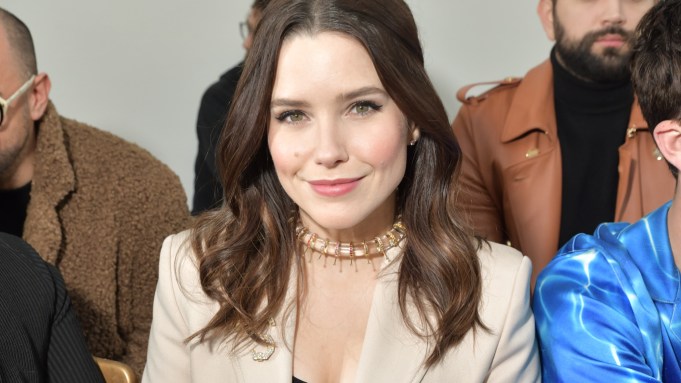 COUTURE KICK OFF: Couture week kicked off bright and early on Monday with the Schiaparelli show, which unveiled Daniel Roseberry’s second couture collection since arriving at the brand in 2019.

Actress Sophia Bush was rocking one of the designer’s jewelry creations, a necklace studded with tiny glittering nails, while chatting about joining the cast of television series “This Is Us.”

“It was just for a moment,” said the “One Tree Hill” actress, who stars in one of the episodes of the show’s fourth season. “I know that people were quite sad when they realized I wouldn’t be staying, and I did feel bad. But the producers asked me to come and sort of play a trick on everyone, because everyone assumed I’d be here longer. We had a great time.”

In the episode, Bush plays Lizzie, a character who interacts with Kevin, one of the three Pearson siblings around which the series centers.

“I’ve known so many of them since I’ve started acting that it was kind of like a reunion on set,” said Bush. “Also, I’m working with the same producers on ‘Love Simon’ and the show shoots next door, so we see each other nearly every day.”

Next up for Bush are more episodes of her podcast, “Work in Progress,” and after that she’ll be on the hunt for her next television project. “It’s about to be pilot season, so I’m going to have to read a lot of scripts,” said the actress.

After wearing the brand at the 2019 BAFTAs, Ackie was happy to be able to attend her first Schiaparelli couture show. “There is something really lovely about wearing clothes that express something deeper than just looking nice,” said the British actress.

Ackie, who starred as warrior Jannah in “Star Wars: The Rise of Skywalker,” readily admitted how life-changing appearing in the franchise has been for her. “It was crazy,” she said. “It was mad. I enjoyed it for the time it lasted but I was so happy when Christmas came around and it was quiet all of a sudden.”