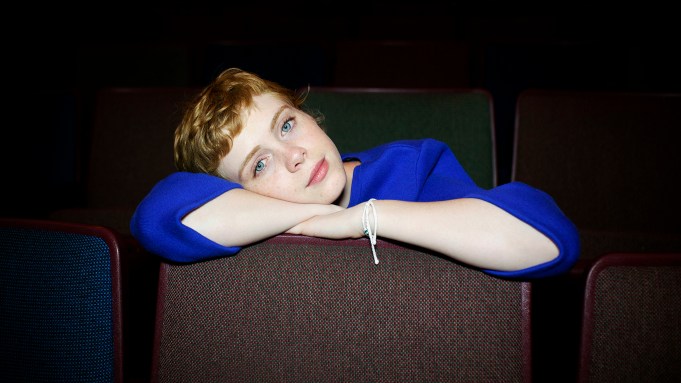 Sophia Lillis is like many 15-year-olds: Excited for the new school year; a little shy in the company of adults, and interested in exploring various creative pursuits. Case in point: the ginger-haired teen shows up to a photo shoot at the BAM Peter Jay Sharp Building with a Fuji x100 digital camera in tow, which she pulls out to show the photographer after gamely posing in the off-hours Rose Cinemas.

And this is where Lillis diverges from most Brooklyn teens — a professional acting career. This month, she’ll appear in U.S. theaters nationwide for the film adaptation of Stephen King’s horror novel “It.”

“I’ve always wanted to be — I know people think this is an insult — but a jack of all trades,” says Lillis a while later at a local coffee shop in Fort Greene, cold brew in front of her. “I love to learn new things, even though I might not master it. That takes a lot of time,” she adds. “You have to have a lot of skills when you act; you might not have it when you start, but you definitely end up with a few skills along the way. Like recently I had to learn roller skating and cheerleading for a week for this one scene. Maybe if I get this one [part], open water swimming.”

Her path to the big screen began with a short student film made by her stepfather, a “spin-off of Dante’s ‘Inferno,'” which involved her dragging a wagon around Times Square. “People enjoyed it. He thought, ‘Hey, why not why not take acting classes?'” So Lillis enrolled in acting classes at the Lee Strasberg Theatre and Film Institute in Manhattan. “The next thing I know, one of my teachers said, ‘Oh, I have a friend at NYU who’s doing a thesis film, I recommended you.’ It started branching out from there. I never knew what I was getting into, but I just sort of went along with it.”

In “It,” Lillis plays Beverly Marsh, the only female member of the Losers’ Club, a group of seven misfits who are targeted by the evil clown Pennywise, played by Bill Skarsgård. The film has an R rating and while she has yet to see a final cut of the movie, the scare factor wasn’t necessarily there while filming. “A lot of it is makeup. It’s not scary considering there are so many people around. And actors are really nice people,” she says with a shrug. “They explain to you what you’re doing before, so it’s less scary.”

Also not scary: the notion of being the only girl in a group of pre-teen boys.

“We were 12 or 13 [years old] at the time. We’re kids, we’re still kids. Nothing weird happened. They always called me the androgynous kid because I had short hair,” says Lillis. “We did become pretty close. A lot of people think because [the film is] Eighties-themed that we didn’t use our phones, because we were constantly outside riding bikes and everything. It was kind of like living in the Eighties when I was doing this movie. We always kept in contact and were always together, less on phones and more talking. I got used to them, they got used to me and we’re good friends now.”

Lillis recently returned from L.A., where she was filming Marti Noxon’s “Sharp Objects” for HBO; she plays a younger version of Amy Adams’ leading character in flashbacks. While she’s looking at a few other projects (including the one that may require open water swimming), she’s most excited about getting back to the public school she attends, which is geared towards the performing arts. Upcoming school year productions include “Pippin” and “a small play that no one’s heard of.”

Although her professional endeavors make committing to rehearsals difficult, she still plans to play a role, no matter how big or small.

“I’d probably try to work on building part of the set or something,” she says.

More Coverage From WWD.com:
Lakeith Stanfield, Acting the Part
Tom Bateman, In It For the Thrill of It
Patrick Gibson is Becoming a Hot Commodity