“I was very pleased to be given such meaty fighting sequences. It's really hard work, but it's so pleasing when you can pull it off," says the actress, who stars in "Infinite" with Mark Wahlberg.

“Look, I’m not dissing the forward roll,” says actress Sophie Cookson. “It’s a skill to do it well. But it was very nice to be trusted with a little more.”

The upbeat actress started her film career in the action genre with the low-stakes stunt, performed for her debut “Kingsman” role. Even after filming subsequent studio films like “The Huntsman,” and the yet-to-be-released “Emperor,” her stunt experience remained minimal until “Infinite.” The film, which Cookson stars in alongside Mark Wahlberg and Chiwetel Ejiofor, was released on Paramount+ on June 11.

“There’s one action sequence in particular with me and Mark where I was, like, this is an absolute joke: it’s a Sunday morning — normally I would probably be in bed at this point — yet Mark and I are running through a forest with a chopper over the top of us — it was just bonkers,” she says. “I was very pleased to be given such meaty fighting sequences. It’s really hard work, but it’s so pleasing when you can pull it off.”

Cookson celebrated the film’s release, affected by several pandemic-related delays, from the countryside outside of London. “It’s strange because on the one hand, I’m obviously incredibly grateful people are getting to see it, but it’s strange with everyone so separate not celebrating it together,” she says, adding that she marked the occasion with a solo toast. “You know, you have to mark these things and celebrate them.”

The film, directed by Antoine Fuqua, offers a mash-up of familiar summer action movie tropes with a sci-fi plot that has drawn comparisons to “The Matrix.” While not warmly received by critics, it’s a film-watching experience that audiences may appreciate for its recognizable elements. The draw of the film — the stars and stunts — was also what attracted Cookson to the project.

“Doing a high-concept action thriller with Mark Wahlberg sounds so not like the thing I ever imagined could be possible to do,” says the 31-year-old actress, who recently starred in the BBC miniseries “The Trial of Christine Keeler” in the titular role. Cookson notes that while her career has ping-ponged from high-budget action films to more character-driven dramas, the throughline for her is wanting to portray strong, complicated women; for “Infinite,” she praises the dimensions of her character.

“I don’t think we see that much in this kind of film. She has a real reason for being [there],” Cookson says. “She’s on a mission; she’s so driven and focused. And seems quite cold on the surface and quite tough, but underneath she’s got so much heart and she’s grieving — not just for her soulmate, but all of the people she repeatedly loses through many lives. And I thought that gave her real gravitas and a very interesting angle to come at it from.”

Cookson is gearing up to start work on her next project, details about which she’s unable to divulge. For now, she’s enjoying quiet time with her family — she gave birth to her first child during the pandemic — and enjoying simple activities: reading, cooking, rewatching favorite feel-good shows like “The Office” and culinary-travel episodes hosted by Anthony Bourdain. “I’ve been quite bad at watching new things, I have to say, but we finally watched the original ‘True Detective,’ which blew my mind,” Cookson says.

That element of surprise is what the actress gravitates toward in her career.

“I love to be surprised. I think it’s the same as an audience member — you don’t want to feel something’s kind of pulling your leg. You want to be surprised by how you feel,” she says. “And that’s the same with me and scripts. If it’s really difficult and really challenging, then I want to do it.” 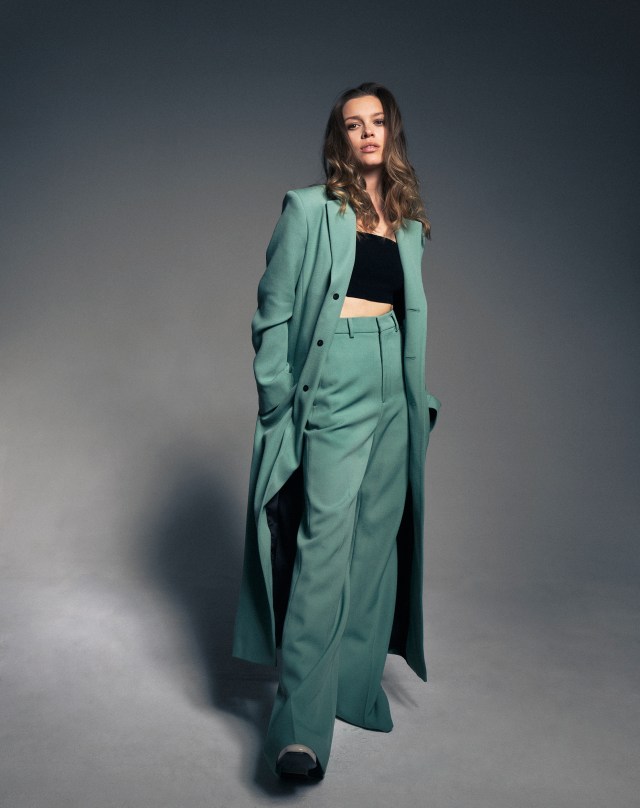