The businessman was awarded the Medal of Excellence for his support of the arts. 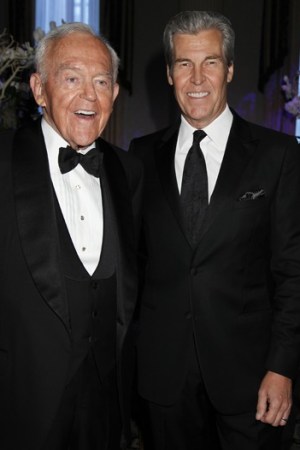 It all started with a lima bean.

When Henry Segerstrom was growing up in the Twenties in Orange County, Calif., he was surrounded by acres of his family’s lima-bean fields. But he had a vision the land could be used for something even more productive, and, in the Sixties, he converted some of that land to a mall. Over the years, that seed of an idea has grown into one of the country’s most productive shopping centers, South Coast Plaza.

On Monday, Segerstrom was awarded the Medal of Excellence by Carnegie Hall for his business acumen as well as his support of the arts. Segerstrom is also founding chairman of the Orange County Performing Arts Center and the Segerstrom Center for the Arts. The event raised $1.5 million for Carnegie Hall’s artistic and education programs.

Terry Lundgren, Macy’s Inc. chairman, president and chief executive officer and a long-time friend of Segerstrom’s, presented him with the award at a black-tie gala at the Waldorf-Astoria in Manhattan that also included a performance by mezzo-soprano Denyce Graves. Lundgren said that growing up in Orange County, he remembered when the lima-bean fields were transformed into the mall and once he started in the retail business, one of his first jobs was as store manager of the Bullock’s in South Coast Plaza.

On his first day on the job, Segerstrom stopped in to say hello and Lundgren proudly told him that the store was the second most productive in the Bullock’s chain. Segerstrom responded: “How long do you think it will take to get to number one?” It took a year, Lundgren related.