The costume designer talks creating a uniform for the comedic take on the military's newest branch.

A still from "Space Force"

The United States Space Force — the newest stand-alone branch of the military, formed to fight wars in space — has had a hard time garnering prestige. Propelled by President Trump’s support and established in late 2019, the branch has been an easy target for comedy: the logo, unveiled earlier this year, bears striking similarity to the Starfleet Command emblem in “Star Trek”; the fatigues, save for a dark blue thread used for the nameplates, uses the same camo pattern as the Army. Critics asked: what purpose would desert camo serve in space?

Funny-duo Steve Carell and Greg Daniels saw the punchline early and jumped on it, creating a Space Force of their own — the comedic series “Space Force,” for Netflix. Like the actual Space Force, the show had a large budget to work with (although much less than the USFF’s $15 billion budget request for 2021). Unfortunately, another similarity is that “Space Force” the show hasn’t received a warm welcome from critics. But when it comes to the war on Space Force uniforms, the show shines over its real-life counterpart.

After the official uniforms for the USFF were unveiled on Twitter in January, Daniels e-mailed show costumer designer Kathleen Felix-Hager. His verdict? “‘Ours are so much better,'” says Felix-Hager, who created her own version of uniforms for the show. Sometimes reality is stranger than satirical fiction.

“It just seemed sort of ridiculous that it would have a desert camo-scape for the moon,” she adds. “That seems even more satirically funny than ours, even.”

Felix-Hager, who’s costumed “Veep,” “Dexter” and “Downhill,” worked with Daniels on the pilot of “Upload” before coming aboard team “Space Force.” The show was filmed before details about the military branch were unveiled, including a logo and uniforms, so Felix-Hager had free reign to imagine what a Space Force cadet could look like. She, too, outfitted the troops in camo, but in the show, it’s a blue-toned camo mimicking the pockmarked surface of the moon.

“When I showed [Daniels] that moon camo fabric, he fell on the floor and thought that was the most hilarious thing he’d ever seen,” says Felix-Hager, who applauded the collaborative nature of the show production. “It was just that little bit of whimsy and seriousness that struck the right note.” 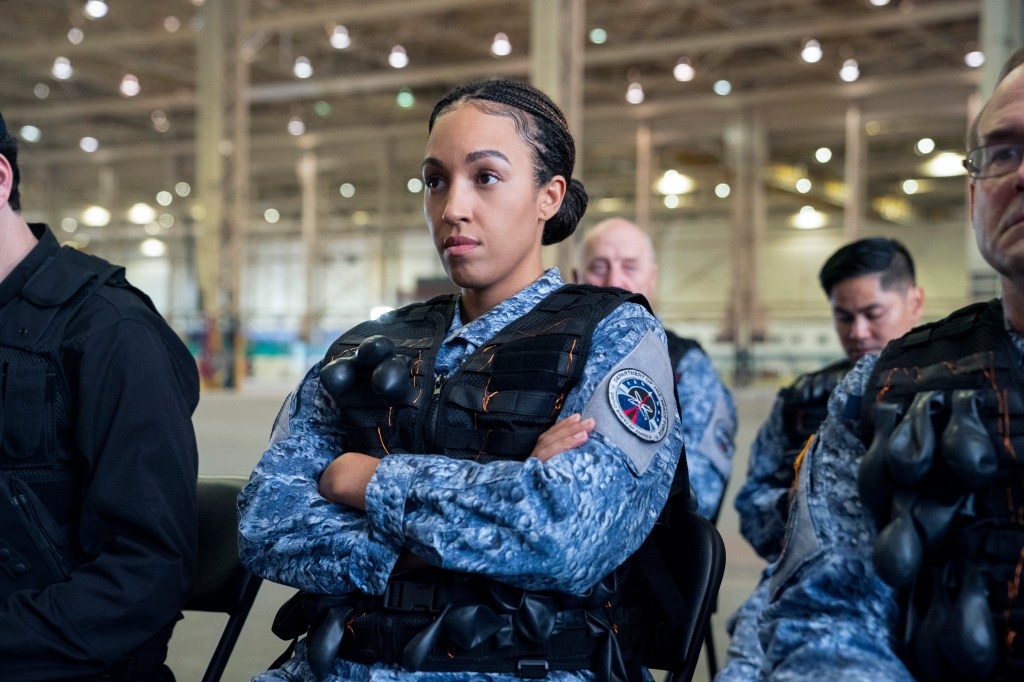 A still from “Space Force.”  Courtesy of Netflix

They ended up creating 75 custom fatigue sets using their custom moon camo fabric design (the uniforms required their own costume truck on-set). While uniforms got “Space Force”-specific tweaks, all the costumes on the show are rooted in reality. “We weren’t doing a futuristic version of space uniforms, we weren’t doing ‘Star Trek’ or anything that represented any big leap into the future,” she says. “And we wanted to be very respectful of military, because for people who serve it’s a point of pride, and we didn’t in any way want to be disrespectful or make fun of.”

The astronaut suits in the show stuck to recognizable tradition. There’s a limited number of suits available to rent from various venders, and at one point “Space Force” was in possession of all of them. (Much to the chagrin of anyone else concurrently working on a space-themed project — where was SpaceX’s new spacesuit design when you needed it?) The cumbersome suits required a dedicated technician and costumer per actor. A similar suit limitation meant that the show had to create their own replicas in-house for the Chinese astronaut suit design. 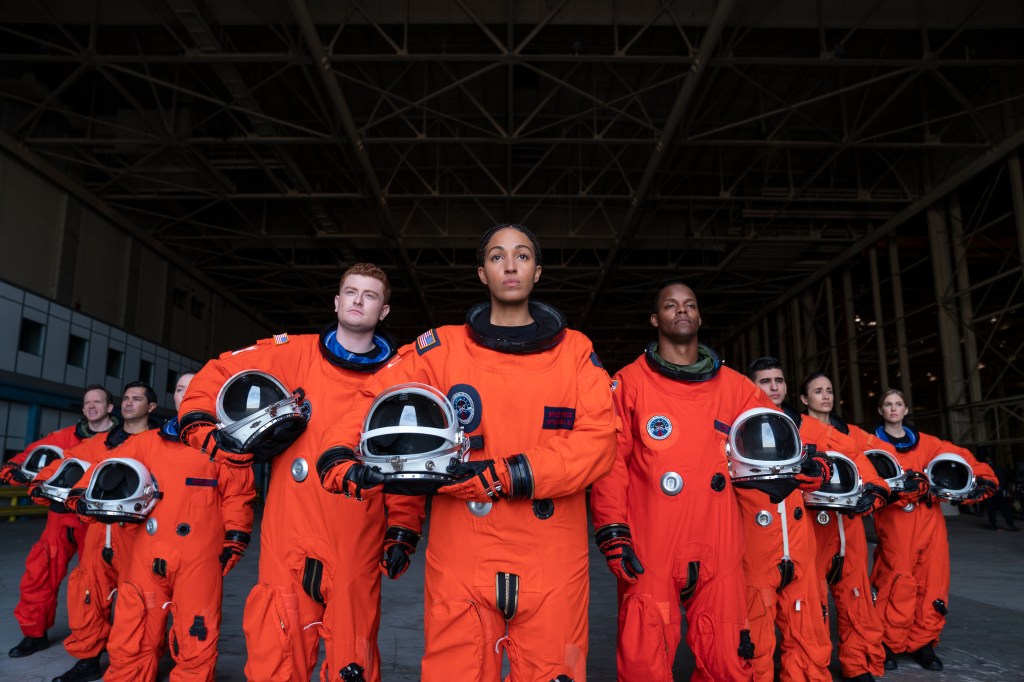 A still from the show.  Courtesy of Netflx

A still from “Space Force.”  Courtesy of Netflx

While the U.S. Space Force is headed up by Gen. John Raymond, “Space Force” is led by Carell. John Malkovich costars as director of the show’s science faction, and the idea of uniform is used to provide character contrast. The rigidity of Carell’s character is channeled through tight-fitting, stiff suits, while the looseness of Malkovich’s character is conveyed through casualwear; he’s also the only scientist who doesn’t don a white lab coat, underscoring a nonconformist, out-of-the-box personality.

Felix-Hager describes early fittings with Carell as important for him getting inside his character. “There’s always that fun moment in a fitting where you start trying things on and you’re talking through the character with the actor, and all of a sudden they’ll put something on and they’ll stand a little different or tilt their head a certain way,” she says. One of those pivotal items was a vintage leather flight jacket, which was actually used in the Air Force.

“He tried on several leather jackets — more trendy versions and more modern versions, but none of them felt right until we put the actual old vintage one on,” she says.
“And that was a very specific moment from him where that felt like his character and defined more of who Mark [Carell’s character] was for him.”

Felix-Hager also worked on Christmas rom-com “Happiest Season,” which stars Alison Brie and Kristen Stewart and is slated to come out at the end of November. “Other than that,” she says. “I’m just living life in quarantine.” 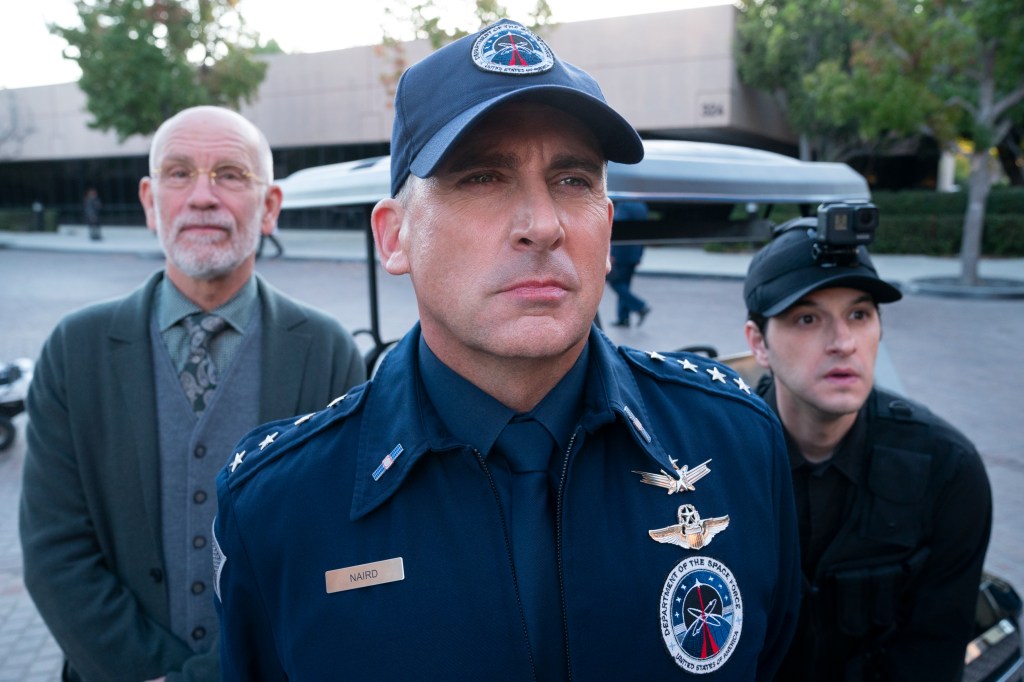 A still from “Space Force.”  Courtesy of Netflix