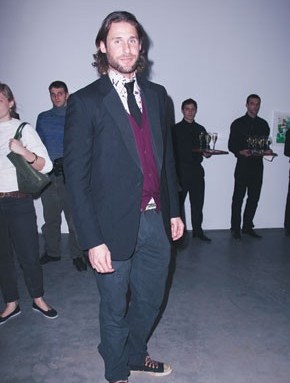 “I find the L.A. woman very changed. It’s not all blonde hair,” marveled Nicolas Ghesquière on Friday night as Balenciaga opened the doors to its futuristic new Los Angeles boutique.

If the natives seemed a bit alien to the designer, his mirrored store certainly put guests in a parallel universe. “I feel like I’m in space,” said Mia Maestro.

Salma Hayek noted that there are perks to being the mother of PPR chief executive officer François-Henri Pinault’s child. “I’m constantly amazed by the things Nicolas creates, especially the baby things. Boy, it’s good to be Valentina,” said Hayek, referring to their daughter. For his part, Ghesquière was relaxed, having spent the last couple of weeks in Los Angeles and Mexico vacationing and exploring before returning to Paris. The crowd — ranging from East Siders Brigette Romanek, Rosetta Getty and Spike Jonze to doyenne Betsy Bloomingdale — also was at ease, as the only beverages available were vodka on the rocks and Champagne. “It might be a bit early for that. I haven’t had dinner yet,” said China Chow as she chatted with Nicole Richie. But Bloomingdale had more serious matters on her mind as she was ushered into the private back room. “Now that Mr. Valentino has retired, I’d really like to be in Nicolas’ hands,”

But while the atmosphere was festive, with guests like Diana Picasso, Ivanka Trump and Claire Bernard sipping Champagne surrounded by bright green paintings by Alex Ross, the subject matter was anything but. After dinner, came a preview of “Playground,” a film about the child sex trade. The subject matter moved some guests to open their wallets as Christie’s Lydia Fenet led a spirited auction for a specially commissioned photograph by Gabriel Orozco.

“David is Vanna White tonight,” she joked of de Rothschild, as the handsome environmentalist not only held the photo but also bid against himself to up the price (he lost it to another bidder for $14,000).

Afterward, guests headed down to Atherton’s after party, at her boyfriend Gavin Brown’s bar Passerby, which is technically closed but opened again for the night — and the following morning, since some partiers didn’t head home until noon.