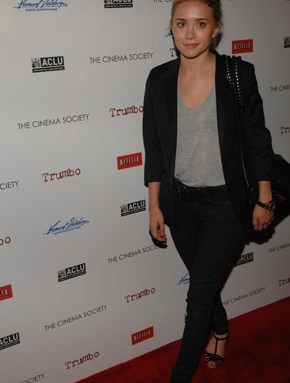 On Monday evening, the Cinema Society hosted a screening of “Trumbo,” a docudrama about blacklisted screenwriter Dalton Trumbo, who, at the height of McCarthyism, was forced to write classics like “Roman Holiday” under a nom de plume.

On hand at Tribeca Cinemas were co-stars Joan Allen and Josh Lucas as well as Ashley Olsen, who arrived with her new beau Justin Bartha and Francisco Costa.

Co-sponsored by the ACLU, the evening had an overtone of the First Amendment, but guests recalled instances when they should have taken the Fifth. Allen has put her foot in her mouth “too many times to count,” she said, while Lucas provided more concrete evidence. “Earlier today I was talking with a woman I like and something just popped out of my mouth.” Such as? “Sorry, I’m going to have to censor myself,” he demurred.