A crush of autograph-seekers lined the steps of Cipriani 42nd Street, where the National Board of Review was holding its annual awards, sponsored by Bulgari. 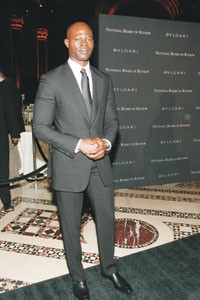 A crush of autograph-seekers lined the steps of Cipriani 42nd Street, where the National Board of Review was holding its annual awards, sponsored by Bulgari. They were not to be disappointed: Penélope Cruz, Helen Mirren, Clint Eastwood, Ryan Gosling, Sarah Jessica Parker and new crowd favorite Jennifer Hudson all walked the black carpet (a change from the de rigueur red).

The color was not all that was switched Tuesday night at this insider affair, which offers award winners a chance to practice their photo ops and speeches before the Oscars. Actress Elisabeth Shue watched from the sidelines as her husband, Davis Guggenheim (director of “An Inconvenient Truth”), posed for photos like a star. Legendary director Steven Spielberg paid homage to his protégé Djimon Hounsou; Mayor Michael Bloomberg presented Best Film to another former mayor, Clint Eastwood, for “Letters From Iwo Jima,” and writer Zach Helm, winner for Best Original Screenplay for “Stranger Than Fiction,” gave the shortest speech of the night: “Thanks.”

Parker Posey, on the other hand, seemed like she would never finish her speech presenting Best Supporting Actress to her “For Your Consideration” co-star, Catherine O’Hara.

“We are human beings — we are not just things on a flat screen,” she said at one point, joking, “OK, now I am really rambling. I feel like I’m leaving a message on the phone. In fact, I should have brought my phone up here so I would feel more comfortable.”

“Can we get two of whatever Parker’s on?” asked Mark Wahlberg, standing with his “The Departed” co-star, Vera Farmiga.

Between courses, intense table-hopping was the order of the day. “Say ‘hi’ to an old guy,” bellowed 91-year-old Eli Wallach to Forest Whitaker.

And while the politically correct Bloomberg claimed he couldn’t pick a favorite movie from among the honorees, Nicola Bulgari, for his part, didn’t hesitate. “‘The Queen,'” he said. “I heard that even the Queen — I mean the real Queen — saw it and liked it.”

Earlier that day in L.A., Dior Beauty celebrated the launch of its L’Or de Vie line with a 40-person lunch at Ursula Andress‘ Beverly Hills aerie — the site of many a wild night, as well as the love nest she shared with both James Dean and Harry Hamlin. Co-host Brooke Davenport, Andress’ current tenant, added her own gold and white decor, and Dior covered the pool with a white carpeted floor to accommodate a table laden with gilt vases full of white lilies and orchids. Sharon Stone, Emmy Rossum, Irena Medavoy, Gwen McCaw, Colleen and Maria Bell and Jamie Tisch basked in the 80-degree sun as chatter veered toward — what else? — beauty tips. Co-host Crystal Lourd and Amber Valletta exchanged masseuse info and Stone took the opportunity to, once again, turn an event into her own personal stage as she toasted the group with a mini goblet of Bernard Arnault‘s Chateau d’Yquem flown in for the occasion.

“It’s supposed to bring eternal youth,” she said as she went bottoms up.