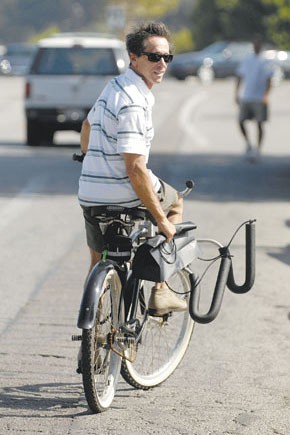 Bye-bye, blacked-out Escalades. So long, speedy and stealthy motorcycles. Celebrities these days are going green, Schwinn-style. Uma Thurman has been spotted tooling around New York City — from the quiet West Village to busy Madison Avenue — on a scooter, and Leonardo DiCaprio navigates Milan’s alleyways via bike. One would think stars of such stature could afford cabs, not to mention want to avoid any overexcited fans they might slowly cycle past. But that doesn’t seem to stop Kate Hudson, Jessica Biel, Owen Wilson and even Hollywood honcho Brian Grazer from preferring two wheels to four. Now if one of them would just put on a helmet.