Spirit of The Night

There were so many lunches, dinners and cocktails over the last six days celebrating the film industry that it's surprising women were able to squeeze into their red-carpet gowns on Oscar night. 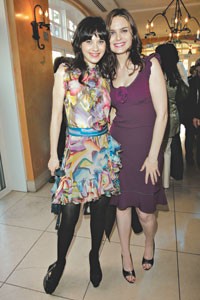 There were so many lunches, dinners and cocktails over the last six days celebrating the film industry that it’s surprising women were able to squeeze into their red-carpet gowns on Oscar night. On Friday, heavy morning rains didn’t keep friends of Arianne Phillips away from a lunch celebrating her nomination for “Walk the Line.” Guy Oseary, Steven Klein, Annie Flanders, Lisa Eisner, Jacqui Getty, Dita Von Teese, Liz Goldwyn, Gela Nash-Taylor and Pamela Skaist-Levy filed into a heated tent at the hilltop private home housing the W Magazine Retreat. “You must have done something very right,” Madonna told Phillips’ over-the-moon proud parents, Judy and Daniel, who for the first time were meeting their daughter’s longtime employer. Seated next to the singer was Jeremy Scott, who, along with Phillips, begins working on costumes for Madge’s upcoming tour this week.

Later that evening, a constellation of stars showed up at Chateau Marmont for an event benefiting ONE.org, proving that once one pretty pair — Brangelina — started voicing concern over the human plights in Africa, the rest of the Beautiful People wanted in. Lindsay Lohan posed with a quartet of tiny orphan choir singers, whose performance in the garden was taken in by Kirsten Dunst, Penélope Cruz, Salma Hayek, Michelle Williams and Heath Ledger.

On Saturday, the clouds broke and the likes of Naomi Watts, George Clooney, Maggie Gyllenhaal and Sandra Oh hit the sunny Santa Monica beach for the Independent Spirit Awards. True to the day’s mandate, it was a chilled-out event — gowns were replaced by sundresses (many of which were Missoni). “Syriana” star Jeffrey Wright accessorized his suit with flip-flops, but Clooney played it safe in a brown Gucci suit, quipping, “When in doubt, stick with the Italians.” Hostess Sarah Silverman kept the crowd laughing with lines like: “Felicity Huffman — it’s so great to see him,” as sisters Mary-Kate and Ashley Olsen and Zooey and Emily Deschanel ate lunch inside the huge white tent. “We always tend to match our outfits. It’s a sister thing,” said the younger Deschanel, who opted for a rainbow of Missoni color, while her older sib stuck with just purple.

Backstage, Sienna Miller — with one cigarette in her mouth and a back-up one classily tucked behind her ear — caught up with Sean Penn while Virginia Madsen hit the giveaway tent (clearly the week’s main focus of many). “It’s not usually my thing to go out,” said “Transamerica” breakout star Kevin Zegers. “But I thought, ‘Why not get some free cocktails?’”

After lunch, winners and losers trooped down the boardwalk to Shutters on the Beach for the IFC After Party, although many stars skipped, presumably to rest up for the big night. But Terrence Howard, Aaron Eckhart, and Alec Baldwin were content to hang out, as was “Crash” star Bahar Soomekh. “This is so me. I’m a beach girl.”

Silverman had changed from her Catherine Malandrino dress to a sweatshirt and cargo pants. “I had to get into my orthotics,” she joked, clutching boyfriend Jimmy Kimmel’s hand. Meanwhile, Julie Delpy gave up on her Jimmy Choo stiletto sandals, padding out the door in bare feet. “These beautiful shoes are killing me,” she purred. Despite the relaxed atmosphere, it was still an out-of-body experience for some newbies, like “Me and You and Everyone We Know” star Miranda July. “I keep looking out at the ocean to remind myself there is a world outside all this.”