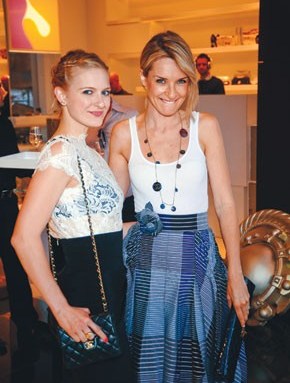 Chanel opened a store on Los Angeles’ Roberston Boulevard, and like all new kids in town, the French brand threw itself a house warming party Thursday night. Not that Hollywood offspring, including Emma Roberts, Aimee Osbourne, Kate Sumner and Ever and Sorel Carradine, needed any encouragement to celebrate.

The British-born Osbourne was delighted to have something European on the trendy shopping stretch. “It’s brought a new kind of chic to L.A.,” she said (whether Angelenos said the same thing when her rocker father Ozzy moved into town is up for consideration).

Meanwhile, Leighton Meester and Michelle Trachtenberg of “Gossip Girl” were just happy to have another reason to play dress up. “You should have seen the Chanel [sample] closet,” said Trachtenberg. “I just stood there in awe.”

But the presence of so many youngsters didn’t keep the over-30 set away. Angie Harmon, Amber Valletta, Tatiana von Furstenberg, Kirsty Hume and Vanessa Getty all showed up, as did Arianna Huffington, who was more focused on the style issues of the Democratic race than the runways.

“Fashion is always important in an election year,” said the blog founder. “Suddenly Hillary [Clinton] is in all these bright colors, like red, orange shades and green. It’s quite a surprise.”

The same night across the country, the generation gap was evident. Guests at the first annual Society of Memorial Sloan-Kettering Cancer Center Spring Ball, sponsored by Bulgari, found themselves treated to a lamb dinner, a live auction by Jamie Niven and a high-energy performance by Natasha Bedingfield in the newly renovated Plaza Hotel Ballroom. Never mind that many had never heard of the Grammy-nominated singer. “What does she sing?” queried Grace Hightower.

“I have no idea who she is,” laughed Jamee Gregory. “We are all so out of it.”

“My grandmother died of cancer,” explained Bedingfield of her miniconcert, which was a break from her summer tour.

The night before, downtown chic-lets swanned into West Village eatery Bobo for a less serious reason: a dinner honoring Palm Beach vintage costume jewelry brand House of Lavande and its founder Tracy Smith. Karen Elson and Sarah Sophie Flicker hosted guests including Jennifer Missoni, Celerie Kemble and Tabitha Simmons — most of whom had stopped by the Lavande showroom earlier to pick up baubles for the affair.

As might be expected of such a girlie affair, most women came without escorts — save for Lucy Sykes, who had her very social hubby, Euan Rellie, in tow. “Costume jewelry is much less frightening for the husbands than the real thing,” she explained.