Catching Up With St. Lucia

By Leigh Nordstrom on May 5, 2016
View Slideshow 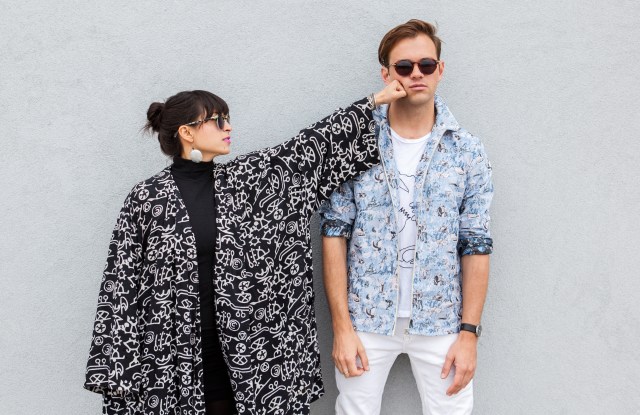 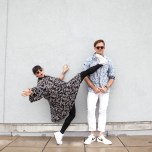 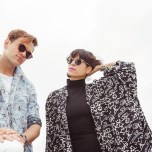 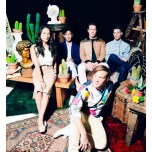 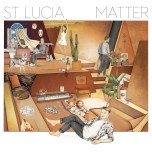 A fake tattoo that won’t wash off — now there’s a good excuse. Such was the case offered by Jean-Philip Grobler and Patti Beranek of Brooklyn-based synthpop band St. Lucia, the morning ahead of their WWD shoot. Two weeks later they’ve just returned from playing a series of shows at Midwestern colleges, and are good and ready (read: free of any temporary ink), sitting in their Williamsburg apartment.

Grobler and Beranek, who have been together for nearly 14 years and married in 2012, got their start, of sorts, at the music production house The Lodge, where Grobler was a jingle writer. “There are two campaigns that I’m actually pretty proud of, one for Chase, and one for Sealy mattresses,” Grobler says. “It was fun but it definitely got really intense. And you can never quite make it the way you want to make it, because even if you throw your heart and soul into something, it’s for a commercial.”

Though certainly less artistically driven, the jingle experience helped the two of them learn production skills. “I feel like we saw that as a stepping stone in a way — but it was an awesome stepping stone,” Grobler says. “Definitely,” Beranek nods, looking at Grobler. “Think about how much you learned as a producer and writer from that.”

It’s also the first time the pair cowrote music. “Before, we’d write something together and we’d sing together and it’d be all romantic and whatever, but the idea was always not to work together,” Beranek says. “I’d always sung on his records but never wanted to be in the band because again, you’re not meant to be together and work together, it’s, like, bad for you, you know?”

The whole working together thing has turned out not to be so bad after all. “We’ve been together for so long,” Grobler says, “and we went through, like, ‘no you can’t work together’ to being like ‘oh cool, this is what we want, let’s get the people on board who will help us do this.’”

Grobler and Beranek met in Liverpool, England, where they both moved for school. “Patti was the first girl I met when I moved to Liverpool,” says Grobler, who is from Johannesburg. Beranek grew up in Constance, Germany, along the Swiss border. “It’s a sweet nice lovely town with the lake and mountains,” she says. “It’s like the most idyllic place you could imagine growing up,” Grobler adds.

“Idyllic” was much of the inspiration for the name of the band, meant to match the mood of their sound. “Basically yeah, I took a map of South Africa out and I took a pen and closed my eyes and put the pen down a few different places, and there were some horrendous names, but then the fifth try was St. Lucia,” Grobler says. “St. Lucia in South Africa is this exotic place where you might go on vacation and it evokes this nostalgic hazy vibe. And the music I was working on at the time for our first album very much had that sense.”

Their sophomore effort, “Matter” was released in January, and they’re spending the better part of the year in tour promotion; this summer sees them on the festival circuit in Europe and the U.S., which seems as hectic as it sounds, but something they approach in stride. “So much can go wrong but it’s really worth it when you see the crowds jumping away to your stuff,” Beranek says of playing the large-scale festivals. Grobler adds that festivals have “less pressure in a way. The vibe is different from when it’s like ‘this is our show.’”

And while many artists might get frustrated by sharing that spotlight with so many other artists, St. Lucia, expectedly, have a much more chilled out attitude to it all. “At a festival,” Grobler says, “some people are just there because they’re waiting for, like, Calvin Harris to come on later.”