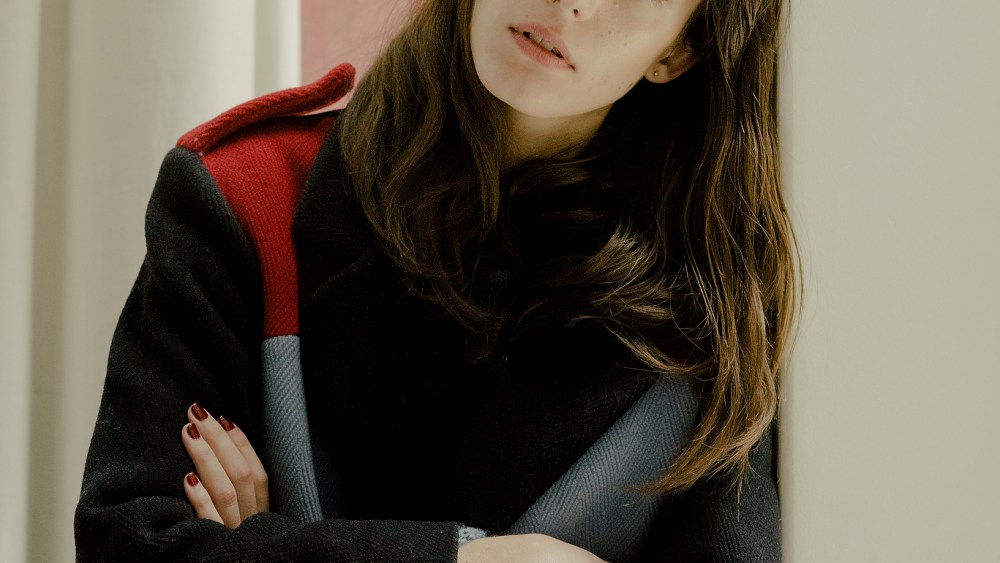 “I had to Google myself the other day, which was terrifying,” says Stacy Martin over a cup of coffee in the drawing room at the Crosby Street Hotel. “And I was looking, [thinking] wow, this is giving a representation of who I am, but it’s not me. Not that I was misrepresented, but I was just like — this is so weird, I feel like the person I am looking at is very different from me.”

One reporter’s take: the 27-year-old French actress, whose cinematic breakout was in Lars von Trier’s “Nymphomaniac,” can be summed up as “chill,” authentically so. Dressed casually in Vans, jeans and a sweater, she makes unassuming small talk with a photographer as he captures her portrait. Martin also has strong fashion appeal, aligned with Miu Miu as the face of their L’Eau Bleue fragrance.

She stars in Michel Hazanavicius’ Jean-Luc Godard biopic “Godard Mon Amour” — which premiered at Cannes last year as “Redoubtable” and will be released Friday — alongside Louis Garrel. She portrays the cinematic legend’s wife, actress and writer Anne Wiazemsky; the film is told from her point of view, based on her book “Un an Après.” No stranger to misrepresentation, Martin notes that she didn’t approach the character through a process of mimicry.

“There was so much distance already from the character — it’s based on a book, which is a recollection of her memory — she’s telling a story that happened years and years ago, which was then interpreted by Michel when he wrote the script. And then we interpreted his writing of a writing. It’s kind of like an endless interpretation,” Martin says of the film’s premise, which is set during the time the pair filmed “La Chinoise.”

“As much as the film is a collage, I wanted to do the same thing with my character, because I knew Louis was doing an incredible performance by mimicking a lot of Godard’s way of speech. His speech is very similar, the way he moved was really similar and I thought ‘well, to balance that out, I’m going to go the other way, and I’m going to create something and just see what happens,'” she says. Martin describes the end result as a comedy-drama. “Godard was a very funny man — people forget that,” she adds.

He’s also still alive, and the 87 year-old director has his own film, “The Picture Book,” premiering at Cannes this year.

“He’s a myth almost — he’s still alive, but he becomes bigger than his own person,” says Martin. “And that’s why he completely negated all his work, because Godard for him was something so outside himself that the tried to kill Godard, in a way. He mentions it in the film, but by killing him, he kills his friends, he kills his beliefs, he kills his relationship, and it’s like how far do you go to be you rather than the myth you’ve created around you? And we have it on a really simple level today with social media, where we have this identity and we have ourselves, and it’s obviously a mirror, but it also sort of doesn’t belong to us.”

Not surprisingly, given her hesitance to accept the distilled persona as truth, Martin has stepped away from social media.

“I had Facebook and Twitter. I liked Twitter because of the news, it just gave you really good news beats. And then when I did my first film, ‘Nymphomaniac,’ I just decided to delete everything. I felt like I needed to move on from Facebook, and I didn’t recognize why I was on it, and it was making me really insecure,” she says. “I tried Instagram for a bit, where I had a secret account, and then it just became the new Facebook.”

She quickly pivots to point out the good of social media: the Women’s March, for example, gained traction online. But for an actress, the dichotomy between public self and private self is particularly pronounced.

“People kind of meet me and go ‘oh, you’re exactly how we thought, and not at all how we thought you’d be.’ What does that mean? It means everything and nothing, basically,” she says. “I like to show my work because that’s the most interesting part about me. I don’t think what I eat for breakfast or where I go on holiday is interesting.”

She’s also been too busy to tap into the endless scrolling: she was in New York filming “Vox Lux” with Natalie Portman and Jude Law this spring, and her upcoming slate of projects includes a period film by Benoît Jacquot, about Casanova’s time in London, as well as Kirsten Dunst’s feature directorial debut, an adaptation of Sylvia Plath’s “The Bell Jar.” The Dunst film is, as Martin describes it, in “pre-pre-pre-pre-production.”

“I was excited it was her [directing] and really happy that she wanted all these really amazing women to be a part of it, and say something about where we were going in this industry at the moment — it’s an exciting project.”

Martin is grateful for the variety of roles and projects she’s taken on, but notes that it took awhile to find roles that weren’t just typecasting her based on her early work.

“People just saw me in a very specific angle, which I was not keen to keep,” she says. “Because I don’t want to just be stuck in one type of filmmaking,” she continues. “It’s a hard industry to keep motivated, as well, so finding different subjects and people is what makes it worth it — when you’re like, oh, I’ve met great people, I feel like I’ve done something good, and I feel proud of having done this — like, oh, it’s possible again and again.”