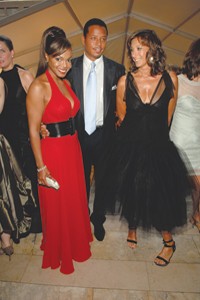 NEW YORK — Luminaries of American fashion and the big screen tried to keep their cool Monday night as they piled into the New York Public Library’s Astor Hall for the 2006 CFDA Fashion Awards. Inside the hallowed anteroom, temperatures were high — literally and figuratively. Every designer worth their tufted pincushion waltzed in with a muse in tow — actual or just for the night. Francisco Costa arrived with Scarlett Johansson, Karl Lagerfeld brought Lindsay Lohan and Michael Kors accessorized with Kerry Washington. “I’m nervous,” said Kors, an Accessory Designer of the Year nominee. “The lights are so bright you can’t even see the audience.” Plus, he added, “I didn’t even take a Xanax.”

“I’m not nervous. I’m very excited,” said Costa, snapping his fingers. “I just want to have a good time and fun tonight.”