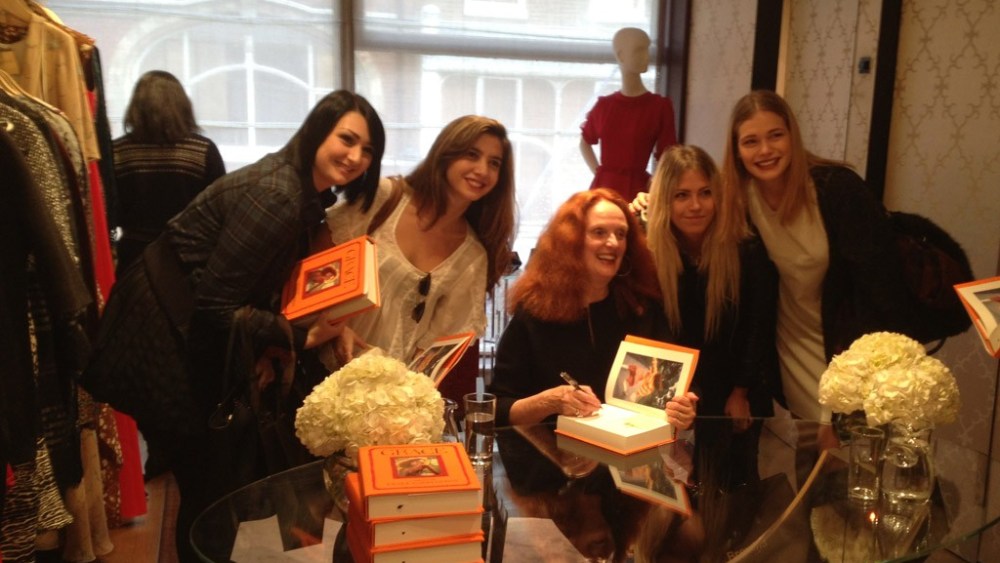 LONDON — Sitting at a glass table covered with white hydrangeas, Grace Coddington signed copies of her book, “Grace: A Memoir,” upstairs at Browns on South Molton Street in London this week.

Fans began queuing at 11:00 a.m. on Thursday, two and a half hours before the signing was set to begin, and by the time Coddington picked up her pen, readers were crowding the street. The supply of 300 books sold out in a matter of hours, and fresh supplies from Random House had to be couriered in.

Coddington, creative director of U.S. Vogue, said the writing took her on an emotional journey.

“It was funny. You laugh at things you cried at, and you cry at things you laughed at. You have mixed emotions,” she told WWD on the sidelines of the signing. “Funnily enough, the most emotional part was a reading I did for the audio [version], and I got emotional then. It was really weird that I’d been able to talk my way through it and be fine, but then when I read it, like when my sister died and things, suddenly I teared up. That was a long time ago.”

She added that memory could be a fickle thing. “I worked with Michael [Roberts] and he was really helpful, because he lived through the same era as me and he kept reminding me of things. He jogged my memory so I could keep going. Other people filled in the gaps too. I made phone calls to friends and connections with people I hadn’t seen in years and, once you start a conversation, it does come back,” she said.

Roberts, who co-authored the memoir, talked about some of the anecdotes in the book. “There’s a great one of Guy Bourdin and trying to dye the ocean blue — all the ink kept getting washed away. It was also great how Grace laid herself bare, admitting how bad she is with technology, that she doesn’t use a computer. And convincing her to open up about her beauty routine. She just uses soap and water,” the British journalist and illustrator said.