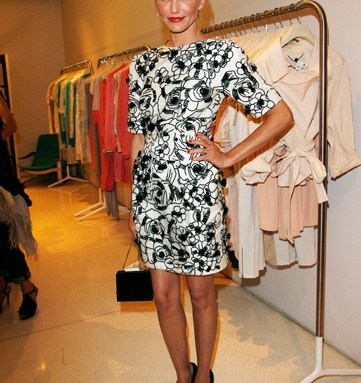 STELLA’S MOVIE NIGHT: “I haven’t been to an outdoor movie since I was a little kid,” said Emily Deschanel at Friday night’s screening of the environmental film “Home” held at Stella McCartney’s Beverly Boulevard
boutique.

The back patio was transformed into a garden full of wooden picnic tables, and guests, including Cameron Diaz, Liv Tyler, Anjelica Huston and Charlize Theron, were treated to snack bar treats like ice cream, hot dogs and popcorn. Although the designer couldn’t make it to see the flick, which was also shown on TV on the National Geographic Channel, her friends were still full of praise.

“I love that she walks the line. She shows you can have high fashion without having to compromise your ethics,” said Diaz.

“She’s a great lady, and she comes from a great family,” said Rosanna Arquette, who was rumored to have been on a date or two with Sir Paul McCartney before he began seeing his current love Nancy Shevell.

Most guests chose to wear short frocks and high heels that would normally be considered a bit much for a backyard screening, but it is Hollywood, after all.

“If my boyfriend arches an eyebrow when I get dressed to go out, I know it’s a good look,” said Rosario Dawson.