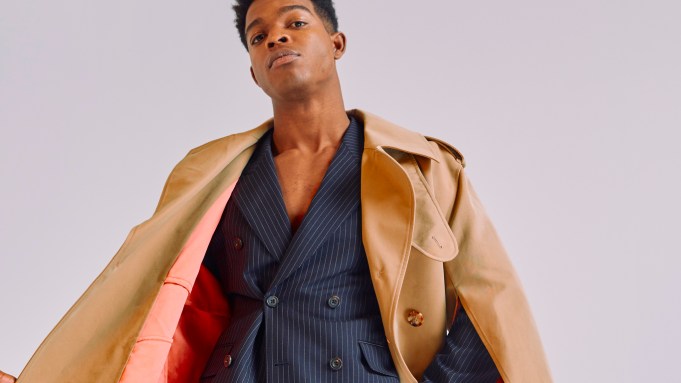 The proper, official breakout of an actor might seem a sudden overnight appearance to the casual filmgoer — ‘isn’t this the guy that was in that other movie?’ — but, as evidenced by the career path of actor Stephan James, it involves years of carefully selected roles, all converging to get you in front of that dream director, for that latest big project. And if those happen to come out during the same awards season? Well, that confirms breakout status even more.

James’ season began at the start of November, opposite “this little indie actress by the name of Julia Roberts” in the Amazon series “Homecoming.” James plays Walter Cruz, a military veteran under the care of Roberts’ Heidi Bergman, a therapist who treats vets at the Homecoming facility for post-traumatic stress disorder.

On Dec. 14, he will be seen in “If Beale Street Could Talk,” written and directed by Barry Jenkins in his follow-up to his Oscar-winning “Moonlight.” The story, an adaptation of the 1974 James Baldwin novel, follows Fonny (James) and Tish (KiKi Layne), a young Harlem couple in love dreaming of a future together while trying to free Fonny from a false crime accusation.

James grew up east of Toronto in Scarborough in community housing, one of three brothers. His older brother, Shamier Anderson, is also an actor whose most recent role was in the show “Dear White People” and who played opposite James in “Race.”

“This wouldn’t be the first thing that people where I come from think about doing,” he says of acting. “But for me, I’ve always had an obsession with watching movies. My mom used to buy us a whole lot of VHS tapes — we had boxes of them, hundreds of them. So we would just go through movies all the time. I got obsessed with impersonations: impersonating people that I knew, people, not famous people but people like my family. At first, it was just fun, it’s always been just fun. But I sort of got to a point in maybe seventh or eighth grade where I started getting heavily involved in drama programs via programs in my high school. I sort of wanted to see how far I could take it. I’ve always been pretty reserved. I think high school helped me break out of my bubble in performing for people.”

He’s equally reserved upon meeting, opening up as the day progresses and he finds his role in the production of his photo shoot, as people fuss over his clothes. He wears a small dark stud in one nostril, the most flashy thing about him (and even that goes unnoticed in most photos). His success seems to be in finding his place in a team, and working off those around him. He’s too fresh to be jaded, but also doesn’t seem like he ever will be; he’s confident, comfortable in himself, and knows what he wants to do.

“I play the best I do; I’m an actor and I love to be able to experiment on different types of wordless storytelling,” he says.

James entered the scene with a role on “Degrassi: The Next Generation,” a sort of rite-of-passage for any Canadian actor. His big break in the industry came in 2014 playing civil rights leader and current U.S. Representative for Georgia’s fifth Congressional district John Lewis, in Ava DuVernay’s “Selma.” The role led him to “Race” in 2016, where he played famed Olympian Jesse Owens (he replaced John Boyega in the role, who dropped out due to scheduling conflicts for “Star Wars: The Force Awakens”).

At just 24, the Canadian actor has made a career of bringing to screen stories of racial injustice throughout history, and with this fall’s two projects, he only furthers that focus. James says he doesn’t necessarily go about selecting roles from a politicized standpoint, but rather from one of needing to tell the most important stories.

“I care a lot about who I’m working with as directors and other actors. It’s giving myself character work that I really appreciate and I’m going to be able to respect and see potential and dive into,” he says. “But I also think that it’s important to me to have a bigger meaning in life that makes me collide with society.”

When James caught word that Jenkins was making his “Moonlight” follow-up, he obtained the script and then headed for the bookshelves to read the Baldwin novel.

“I really appreciate Barry Jenkins as a filmmaker, and the fact that he’s always wanting to push the envelope, and challenge perspective and make people uncomfortable in a way that doesn’t seem like it’s allowed anymore,” James says. “For him to be so brave, and so courageous as to make films like ‘Moonlight’ and to make films like, ‘If Beale Could Talk,’ quite frankly, he could make anything he wants.”

It was his first time reading Baldwin, an experience that clarified for him how timely the writer’s words are in the current day.

“I was really a fan of Baldwin as an activist, before I had even read his work. And there was something about Baldwin’s work that reminded me of Barry Jenkins,” James says. “Though it may be the other way around: they’re one and the same with their love and the passion they have in their storytelling. I think it’s very unique, the passion that they have for some of these stories about black love and black pain, and tragedies and hurt, and joy as well, and those oddities.”

He sees a necessity in bringing to life Baldwin’s story, which, in its discussion of racially driven false imprisonment, is as relevant as ever today.

“What an incredible story to be able to tell when you look at something that has so much resonance today, with the issues of mass incarceration and false imprisonment,” James says. “Things that resonate so much today that Baldwin had written these kinds of stories in 1974.”

Inspiration for his Fonny came from Kalief Browder, who in 2010, at age 16 was charged with stealing a backpack in the Bronx and spent three years behind bars before committing suicide shortly after his release.

“He always maintained his innocence. Looking into his story, and looking at the mental and physical challenges that he had faced while imprisoned as a young man, that to me is hard for a grown man to be able to cope with, much less a 16-year-old boy,” James says. “The story is so much bigger than Fonny, or than Kalief. These two were just exhibit A and exhibit B.”

Yet while he always searches for deeper meaning in his roles, James recognizes that to move to the next level of stardom requires breadth in his choices. So he’s elected for an action film next, and recently wrapped “17 Bridges” in Philadelphia, in which he stars alongside Chadwick Boseman, Sienna Miller and Taylor Kitsch. The film is a departure for him, an opportunity to flex his range.

“It’s sort of an ode to a lot of the films I grew up watching, like ‘Reservoir Dogs,’” James says of the project, his first big action movie. “Action-thriller movies with character compatibility, and human stories within that.”

The list of those he wants to work with — “Quentin Tarantino, Steve McQueen, Don Cheadle. Leonardo DiCaprio, he’s my favorite actor on the planet” — is impressive, but with Ms. Roberts as a checked box, nothing seems far off. “I’m just scratching the surface,” he says.

Jacqueline Bisset Is Having the Time of Her Life