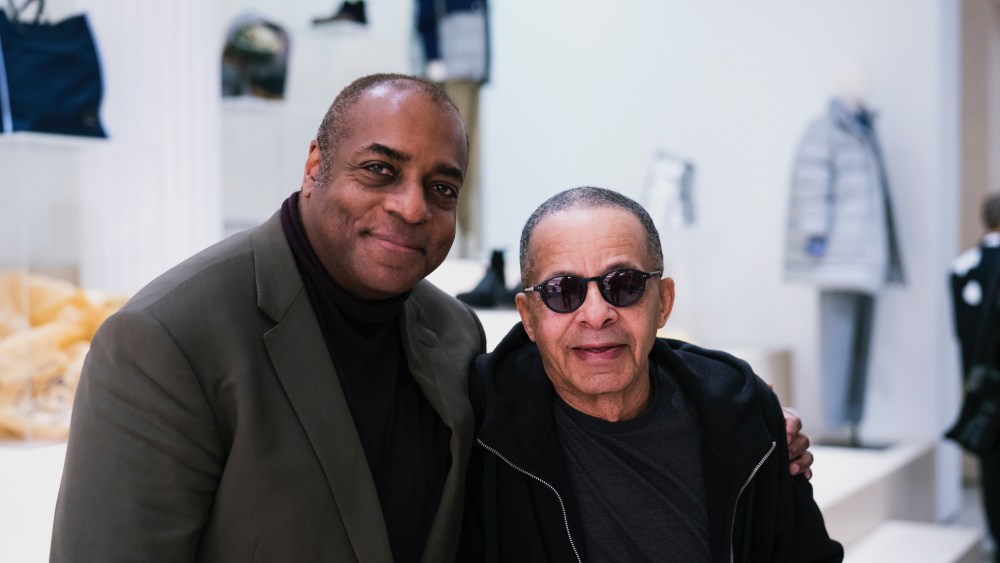 NEW YORK — “Tonight we’re going to hear from legends,” proclaimed Phillip Lim to a crowd gathered Monday evening at his downtown Manhattan boutique. “[These men] were pushing the boundaries and creating opportunities for people of color and minorities before some of us were even being pushed around in strollers.”

Lim was speaking about designers Stephen Burrows and Jeffrey Banks, who for the first time joined in conversation about their individual journeys in the fashion industry. The event, which is the second Lim has hosted in collaboration with the Fashion for All Foundation (FFA), was moderated by the ebullient former model and executive Audrey Smaltz, whose familiarity with “the two Mr. Bs” allowed for an hour of candid storytelling that had the feeling of a lunch with friends rather than an industry lecture.

“The word ‘creator’ is often used loosely in our business, but a creator is an originator,” purred Smaltz as she introduced the unassuming Burrows.

But for the younger members of the audience — including the daughter of FFA cofounder Hannah Stoudemire, who began the evening with a reading from Martin Luther King Jr. and Shirley Chisholm, the first black woman elected to the U.S. Congress — the struggles of Banks and Burrows as established men of color in the industry may now too easily be forgotten, even in Black History Month.

As more of Burrows’ self-claimed “posse” began wearing his creations, the young designer debuted at the short-lived O Boutique on Park Avenue South and soon found himself on the fast track to success with a roster of clients that included Carol Channing, Faye Dunaway, Nina Simone and Lauren Bacall.

In 1970, Burrows was introduced to Geraldine Stutz, the legendary president of Henri Bendel. “I took her some of my samples…[on] a Thursday and on Monday I started work. By 1973 the line was up to a million dollars,” said Burrows.

In November 1973, he participated in the historic fashion show that pitted French designers against their American counterparts, which was dubbed by the late legendary WWD publisher John B. Fairchild as the “Battle of Versailles.”  The occasion was to raise money for the restoration of the French palace, and the 700 attendees included Princess Grace, Andy Warhol, Liza Minnelli, Gloria Guinness and Marie-Hélène de Rothschild.

Yves Saint Laurent, Pierre Cardin, Christian Dior, Emanuel Ungaro and Hubert de Givenchy went head-to-head with Oscar de la Renta, Halston, Bill Blass, Anne Klein and Burrows, who was the only black designer represented. “The French insisted that I was the only designer on the American side who was any good,” boasted Burrows. “They didn’t care who else was in it so long as I was there.”

Burrows recalled another instance of European admiration when models Pat Cleveland and Alva Chin — favorites of the now 74-year-old — traveled to a fitting at Valentino’s Rome boutique clad exclusively in looks by Burrows, which dazzled the Italian designer.

“I heard about it from Pat, but [Valentino] just marveled at their clothes and asked what [they were] wearing,” explained Burrows humbly. “Those girls went to Europe only taking Stephen Burrows in their suitcases.”

For Banks, the path to success began with a moment of unintentional racial discouragement. In August 1963, his parents participated in the March on Washington, which was also the occasion of Martin Luther King Jr.’s “I Have A Dream” speech.

Banks was placed under the care of a local nursery school teacher that afternoon and after discovering an article about Saint Laurent in a magazine, the now 62-year-old announced to his sitter that he, too, would “be a designer like Saint Laurent someday.”

“She was a black woman and very nice and intelligent and she said to me, ‘Whoever heard of a black designer?’” recalled Banks. “That stuck in the back of my mind and I remember thinking, ‘I’m going to show her.’ My parents always made me believe I could do anything I want as long as I was willing to work hard for it.”

By age 16 the aspiring creative was working for men’s clothier Britches of Georgetown and was enamored with the style of Ralph Lauren, then in the early years of his career. “He came down [to D.C.] to do a charity fashion show and the owner [of Britches] suggested I pick Ralph up at the airport. I literally had just gotten my license.”

After recovering from a flat tire en route — “fortunately there was a spare and fortunately Ralph’s plane was late” — the young Banks retrieved Lauren and struck up conversation about “movies and Katherine Hepburn and Cary Grant and all the things he loved and I loved.”

Charmed by the enthusiastic young man, Lauren eventually hired Banks just three weeks out of high school, which led to three-and-a-half years with the designer. “I loved working for him. He called me his other son. I used to babysit his kids. I took Andrew [Lauren] to his first movie. It was a great experience.”

But as a student at Parsons, the pressures of being a full-time student and juggling a nearly full-time gig with Lauren eventually became unmanageable and his work suffered. “I was a zombie,” explained the five-time author, whose latest tome, “Norell: Master of American Fashion,” was released this week. “They both said I needed to make a decision.”

Not wanting to disappoint his supportive parents, Banks left his job with Lauren, who was “actually very angry that I quit,” to complete his last year at school. It wouldn’t be long before Banks’ talents would be called on once again — by Calvin Klein, who got wind of his departure from Ralph Lauren.

After explaining to Klein that his departure from Ralph Lauren was to focus on schoolwork, the persistent designer made Banks an offer he couldn’t refuse: “[Calvin] said, ‘I will pay you a weekly salary and you come in when you have the time. If it’s one day a week or only on Saturday I don’t care.’”

After leaving Klein in 1977, the Coty Award winner launched his namesake brand and two years later another chance meeting — this time with an ambitious 22-year-old assistant named Mindy Grossman — would once again alter Banks’ professional journey.

“I had a license with Enro shirts and Mindy was filling in for the receptionist,” said Banks of Grossman, who later served as ceo of the Home Shopping Network and is currently president and ceo of Weight Watchers. “I watched her for 20 minutes and thought, ‘She is extraordinary.’ Three months later she called me and within two years she was president of my company.”

After Banks published his first book, “Tartan: Romancing the Plaid,” in 2007, Grossman encouraged Banks to begin designing housewares to be sold on HSN. A decade later, the home division is the network’s biggest division and, says Banks, “I am their top resource.”

Despite his natural talent, Banks revealed that his draw to fashion was partly because of its instant gratification and, at times, disappointment. “Sometimes with art it takes years for people to appreciate and buy it. When you think of someone like Van Gogh who didn’t sell a single painting in his lifetime, I wanted to know what I was doing was right or wrong and I couldn’t wait until after I was dead. Fashion seemed like a very practical thing for me.”

As young black men launching their careers in the wake of the Civil Rights Movement, Banks and Burrows had a set of challenges that many young people of today will not face. However, both designers see the next generation of industry leaders facing a new set of obstacles.

“The biggest piece of advice that I give to kids who want to be in fashion today is you really have to learn business,” said Banks as Burrows nodded in quiet agreement. “When I opened my business at 22, I started with $5,000. You can’t sign a lease [with that] for a hole-in-the-wall anymore let alone buy fabric and sewing machines and all of that. The more you learn about business, the more successful you will be.”