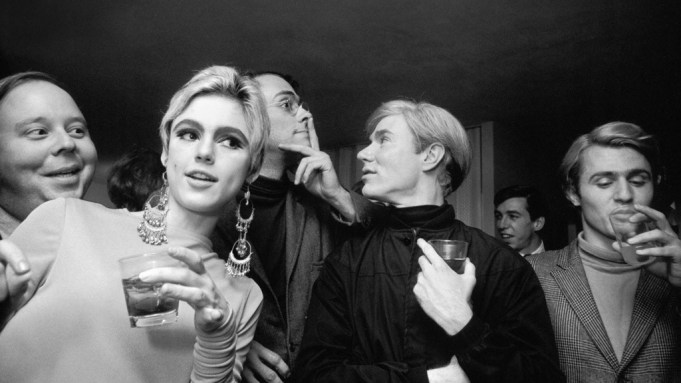 BERLIN — An eyewitness to history, Steve Schapiro photographed some of the most iconic images of recent decades — from Martin Luther King Jr. to migrant workers to Marlon Brando — but the 78-year-old says he’s still trying to get better at his job.

“I still haven’t done my best photograph, in my mind, at this point. I’m still looking for a photograph which I really feel has lasting quality,” insisted Schapiro, sitting down for a chat at Berlin’s CWC Gallery, the city’s newest outpost of Camera Work. Surrounded by glass-framed photos from his long and varied career — a Factory party with Edie, Andy and the gang, Muhammad Ali shirtless and playing Monopoly, Barbra Streisand in perfect profile — he paged through his latest book “Then and Now,” published by Hatje Cantz.

The book, which recently launched in Germany and is scheduled for a Friday release in the U.S., includes many never-before-seen images from Schapiro’s archives of journalistic work, celebrity portraits and movie-set shoots, as well as some of his recent forays into digital photography. The 50 years’ worth of pictures reveal incredible access and intimate insights.

As a freelance photojournalist in the Sixties, Shapiro worked for the magazines Life and Look, and later shot the first cover for People. His photos hang in the halls of the Smithsonian and Atlanta’s High Museum of Art and feature in countless private collections and galleries, as well as several books. Many of his pictures are powered by that undefinable, invaluable quality that propels so many notables to the top — charisma. Schapiro says it’s not always evident at first glance, citing a shoot with a famous top model as an example.

“We were going to photograph her, and we’re in the Grand Canyon, and we’re driving to it. And she’s, like, incredibly famous. And I’m looking in the [rearview] mirror and I’m saying, ‘This is isn’t going to work at all,’” he says, recalling a shoot with Christie Brinkley. “And the moment we started shooting, it was perfect. So you can’t always tell.”

What is evident is that his images also have a cinematic quality, so he was a natural to take behind-the-scenes portraits on some of the great films, including “Taxi Driver,” “Midnight Cowboy” and “The Godfather.” But whether on the streets or film shoots, he says he wasn’t always aware of when he had a hit in his lens, or that his mountains of daily work would end up as collectibles.

“Basically, this little guy took all these pictures, and now I have them. This little guy was a workaholic, which was great. Because he left me all this stuff,” laughs Schapiro.

The once brightly colored but now fading orange band on Schapiro’s wrist proves that the little guy is still working hard. It’s from the Beloved sacred art and music festival in Oregon, one of the venues he’s visited for his current book project called “Bliss.” Together with his son, who is keenly spiritual, Schapiro is making the rounds of such events internationally, camping in tents and snapping participants reveling in the music and community, for the work in progress. This veteran of several youthquakes says there’s something missing in the current generation of seekers compared with those of the Sixties. “You were very much aware of what was happening in the world. And I would say that in terms of this grouping, there’s less interest in the outside world entirely,” he muses, noting a lack of interest in politics as well.

For a man known for his poignant photos of Dr. King and Robert F. Kennedy, politics are still important, but politicians of today hold little appeal, nor do contemporary celebrities whose schedules and speech are highly controlled by publicists, Schapiro says. Once, he spent days or even weeks with his subjects, building relationships that developed into great photos. Now, he says, “if it’s not a cover, you probably spend two hours, and people have to keep changing their clothes every 15 minutes so that it looks in print as if you’ve been with them a long period of time. And you have usually a handler sitting there saying, ‘Oh no, wait a minute, I have to fix your hair — no you can’t put a cigarette — no cigarettes,’” he says, dropping his voice into an intent whisper to imitate the commentary of an intent p.r. agent.

Turning to review the famous faces he’s captured and the moments he’s frozen forever in black and white, he says he can’t really explain what makes a photograph have lasting power. It could be an emotional quality or an intuitive feeling or immaculate design. “Certain pictures get better with time.”