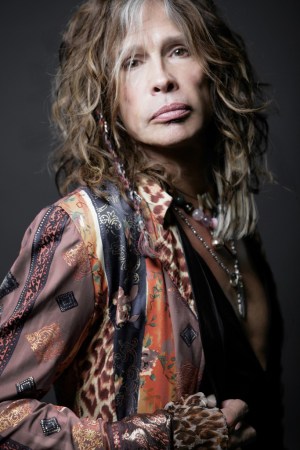 Anyone swinging by Macy’s Herald Square tonight is likely to see Steven Tyler, the charismatic front man of Aerosmith, posing in the windows.

Tyler, who’s the face of a new rocker-chic sportswear line Andrew Charles, will appear with daughters Chelsea and Mia in the windows to promote the women’s and men’s collection, which is exclusive to Macy’s. Later, some 300 customers who made a $100 Andrew Charles purchase on Thursday and received a backstage pass, will have the chance to meet Tyler and have their photograph taken with him.

This story first appeared in the October 14, 2011 issue of WWD. Subscribe Today.

Tyler, 63, was interviewed by phone earlier this week en route from California, where he’s a judge on “American Idol.” This is his second season on the Fox-TV show, evaluating aspiring singers alongside Jennifer Lopez and Randy Jackson. But Tyler hasn’t jettisoned his own musical career. He’s about to embark on a 19-date Latin American and Japanese concert tour with Aerosmith, which kicks off Oct. 22 in Lima, Peru.

Known for his wildly colorful on-stage attire — which over the years has run the gamut from leopard print lace-ups and hip huggers to bold printed silk shirts, layered jewelry, leather jackets and long scarves — Tyler is excited about collaborating with Andy Hilfiger on the Andrew Charles sportswear collection. The line, which is available in 100 Impulse departments at Macy’s, is being developed by Music Entertainment Sports Holdings, a division of LF USA in partnership with Star Branding.

Here’s what the high-spirited Tyler had to say.

WWD: What have you been up to?
Steven Tyler: I’m in a car heading over to an aircraft carrier. I’m in San Diego. We’re doing “Idol” down here. We started six weeks ago. We’re doing all the auditions, and we’re at the point where we’re saying, “You’re going to Hollywood!”

WWD: How do you like doing “American Idol?”
S.T.: I do. I didn’t like it in the beginning. I always thought about people who made it [in this business], you read about them after and wanted to see what clubs they played, were they from Europe or China, but kids today, everyone’s so connected by the Web. There are hardly any clubs today. The idea of the show was to find some talent, and then let people at home vote on it. And then in that way, the trial would end. I thought it was cheap shot show thing. It really turned out to be a lot more interesting than my myopic point of view.

WWD: What do you think of the talent on the show?
S.T.: I miss clubs. It was my era. But it’s a new era. They do come out of the woodwork. There are those who are homegrown. Out of 10,000, there’s 100 who are really good. I know that it starts with who we let through.…They’re all put through the ringer. And the ones who aren’t that good are going to fall by the wayside. It’s a very excruciating and extracting [year] for these kids. From now until next May, it’ll be seven months to get their s–t together and learn to sing the songs. I really enjoyed watching Lauren Alaina show up in a truck with three brothers in jeans and a T-shirt and how she washed up in the end to be second runner-up with Scotty McCreery, who won. Interestingly enough, he was the least changed.

WWD: Have you always enjoyed fashion?
S.T.: I love it. Somewhere in 1967, when I was in high school, I remember getting made fun of because I wore cowboy boots. I sewed buttons on each side of the cowboy boot, which I attached to my pants, so they wouldn’t ride up. The haircuts and the style of clothes that I loved were Mod English, Carnaby Street, Anita Pallenberg.…I loved it so much, and got made fun of by kids in my school and kids in my band. I would have my clothes made in 1971, I bought bolts of stuff, and they made jackets and pants. Those styles I would wear, and Joe [Perry, Aerosmith guitar player] would come over and say, “That looks great. Do they make that for men?” It was so over-the-top.

A lot of the stuff we’re doing with Andrew [Charles] is ideas out of my closet, since I never threw anything away, and stuff that I wore on “Idol” last year. It’s just my favorite s–t to wear…zippered-up bell-bottoms, where inside the zipper I put a red handkerchief inside blue jeans. When you open the zippers, you see the handkerchiefs.

WWD: Do you choose your own clothes for your concerts and TV appearances?
S.T.: My girlfriend, Erin [Brady], has been doing my styling this year. She knows everything that I love so we find stuff out of my closet, and we put pieces together that are so back in. Everything from my closet is from 30 years ago, so it’s like a treasure trove. It’s full of so much great stuff. Every time I go through it, it’s like, “No, wait, what’s this?”

WWD: Do you enjoy shopping?
S.T.: Oh yeah. We did 33 tours since 1970. I designed most of the stage clothes. When you’re out shopping in Paraguay, you’re going to come home with some ostrich boots and a black-and-white checkered hat and some bolos they caught the ostrich with.

WWD: How did you establish your trademark scarves, and when did you start wrapping a scarf around your microphone? I understand you’re coming out with a collection of scarves called Rock Scarf, inspired by Steven Tyler for Andrew Charles.
S.T.: It’s just something I’ve always wanted to do, and now I am so known for that. It started with the shirts I wore on stage. They got so dirty and ripped up, I just hung them on my mic stand, and one thing led to another. I loved in 1968, 1969 and 1970 Sundari Imports…all the Indian tapestries. It gives me a chance to show off again.

WWD: You published your memoirs this year. Do you have plans to make your life story into a movie?
S.T.: It’s either as soon as the plane goes down, or in my lifetime. I’m thinking since Ron Howard bought my book, his production company is thinking about doing something. My book is called “Does the Noise in My Head Bother You?” It’s collected thoughts. It’s all this s–t I’ve been thinking about for 40 years. This whole thing with Aerosmith has been like a dream come true. It’s like it’s been plotted out and planned and written about before. Every time something happens, I think, “Is this a movie?”

WWD: What was it like working with your 22-year-old daughter, Chelsea, on the Andrew Charles ad campaign?
S.T.: I called Chelsea up, like I did with Liv once before, and told [Chelsea] I’d love to do this with you. It’s going to be huge. She’s in art school, and she doesn’t want to be huge. She’s already got a huge daddy. They kind of want to do their own thing. When we were done with the pictures that Melissa Mahoney took…with Chelsea’s face, it just took the whole project over the top. She just got signed with a modeling agency [IMG Models].

WWD: Would you like to have a collection under your own name, or is this good enough for now?
S.T.: This is good enough right now. Every day things are coming my way. I’m with CAA [Creative Artists Agency], and I talk to all kinds of people all the time. Because of “Idol” now, it’s taking the whole fame thing up and the notoriety tenfold. I don’t know if it’s a good thing or not. I can’t really go anywhere now. I can at least go to some town in Japan.

WWD: With “American Idol” taking up so much of your time, do you still have time to devote to your music?
S.T.: We’ve been doing an album while we’re doing this. There’s not enough time to get involved in the album the way I’d like to. It’s getting done, slowly but surely. The tour’s certainly happening. I’m so happy. The band is back together. Everybody’s lost their anger for me, for taking on “Idol,” they’ve all grown up a little, so it’s great.

WWD: Have you had a chance to watch “The X-Factor” and what did you think?
S.T.: It’s all right. They’re not finding the talent that we are. That will always be my brag. I will never look as good as the Pussycat Dolls’ Nicole Scherzinger. I’ll never be as bad ass looking as Nicole.

WWD: How did you and Jennifer Lopez get along?
S.T.: I’m going to fall in love with her all over again this year. And now she’s single. I’m in a relationship with Erin Brady, my girlfriend. But J.Lo is a force to be reckoned with. At the end of the day, it’s all fun. She’s such a female. She respects my talent, and she knows I love her. It’s all good. And Randy’s so smart with all the up-and-coming and today’s artists because he’s a producer and knows all these kids. I just know from whence I came. Jennifer knows dance and feeling and the star quality, and the professional side. Randy knows his melody and the today-ness of it all. And I know my melody, rhythm and the old-school stuff.

WWD: Do you think you would continue as the inspiration for the Andrew Charles line beyond your one-year contract?
S.T.: I don’t know. We’ll wait and see how successful it is, and how it plays out. It’s a new marriage. I love Tommy [Hilfiger] and Andy [Hilfiger] is an old rocker from the old days, and it’s been a good marriage up to now.

WWD: How did you like the Andrew Charles line when you first saw it?
S.T.: I didn’t. I didn’t love it in the beginning. I told them exactly what my vision was, and as it went on, they decided to go in that direction a little bit more. I was so taken back by what Andy laid out and showed me in the beginning, compared with what we wound up with in the end. It went from 1 to 10. We worked so well together. We came up with such great styles, and some really cool prints and some great dresses.

WWD: How would you describe your own personal style?
S.T.: Over the top, old school, a mixture of now and then, with rock and chic. Funky, but chic, with a side order of sexy.

WWD: Tell me about your closet in your home in Boston.
S.T.: If you were to go through my closet right now, you’d lose your mind. I have 300 square feet from the last 40 years, 20 clothing racks. I got boots from hell from everyone from what Brian Jones [of the Rolling Stones] used to wear to boots I’ve designed recently. Just tons of stuff. I’m exploding with ideas. Andy [Hilfiger] came to my L.A. house, you couldn’t walk through [the closet] either. You need a seeing eye dog to get through it all.