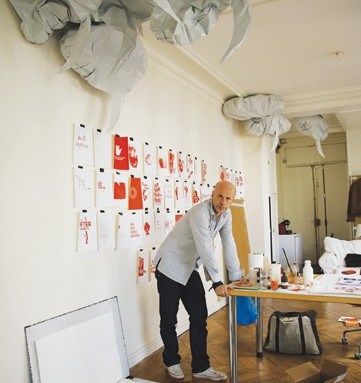 Within the heart of Paris’ garment district, in a dark 18th-century building, Philippe Parreno’s intricate wood reliefs provide the entryway into the artist’s sun-filled thirdfloor studio where he creates his works. Or, in his view, magic.

“I believe in magic more and more. Maybe I am going to turn into a magician and grow a long beard,” says Parreno, whose work relies on the juxtaposition between reality and fiction. “There is no difference between magic and art—the way you affect consciousness.”

His oeuvre ranges from installations to drawings to performance pieces, and much of it is collaborative. For instance, his award-winning documentary film, Zidane: A 21st Century Portrait, which transformed the rigmarole of a soccer game into a piece of art, was made with his friend, the artist Douglas Gordon. The film is as long as a game, but the perspective is unique: Parreno focuses only on French soccer legend Zinédine Zidane.

The latest show of his work continues his collaborations—sort of. In the forthcoming exhibition at New York’s Guggenheim Museum, “theanyspacewhatever,” which runs from October 24 to January 7, Parreno’s work will be shown along with that of Gordon and eight other artists including Maurizio Cattelan, Pierre Huyghe, Liam Gillick, Dominique Gonzalez-Foerster, Carsten Höller and Angela Bulloch, all of whom are better known in America. “The 10 artists grew organically, and have shared sensibilities and conceptual practices,” says Nancy Spector, the Guggenheim’s curator of contemporary art, who describes Parreno’s work as having a “poetic” and “ephemeral” quality. “[The artists] create by moving beyond representation. It comes at you in a peripheral way,” she says.

The exhibition, sponsored by Hugo Boss, will present a genealogy of the artists’ shared history through site-specific installations of new, often self-reflexive works. Parreno plans to erect a large black marquee outside the museum that will be illuminated. “It will be like a big theater, a ghost of a marquee instead of a marquee itself—like a really shiny black construction that pops up from the construction of Frank Lloyd Wright, but there are no words on it, so it’s like the label becoming more important than the work itself,” he says, adding he will lend his voice to the audio guide that will accompany the exhibition.

“I try and focus on my own practice and obsession, which take many different forms,” explains Parreno. “Anything which changes consciousness, any use of signs, colors, words that affect consciousness whatever the format is.”

The feeling by many in the art world is that this is his moment to shine. A sequel to his Zidane film is in the works, as is the completion of a recent performance in Japan, where he collaborated with American ventriloquist Ray Ron Lucas. “It’s a text that I wrote and I start speaking and then Ron starts speaking and in the end, the voices merge and you don’t know exactly who is speaking,” says Parreno, who’s represented by the trendy French gallery Air de Paris, which counts Gillick and Höller as part of its collective.

And he already is thinking of his next project beyond the Guggenheim installation. “I am going to work around another general topic. It will also be a portrait, telling the fiction without telling the lies,” he says enigmatically. “I am not sure if this new project will be a solo project or with Douglas [Gordon], but I will start production in 2009 for 2010.”

The artist, wearing jeans, an untucked shirt and Converse sneakers, is unassuming, leaving his art to do most of the talking for him. Born in Algeria in 1964 of Spanish-French heritage, Parreno was a mathematician before making the transition into art, a not-so-incongruous leap, considering the esteemed Renaissance artist Piero della Francesca was more commonly known as a mathematician in his day and, of course, Leonardo da Vinci was renowned for his scientific and mathematical experiments. Parreno studied at the art school in Grenoble, France, and then at the Palais de Tokyo.

Contemporary art was a late influence for him, and instead he cites TV and cinema as having a major impact on his work. But influence can come from many sources—Parreno also loves the memory-centric novels of W.G. Sebald; the tortured-hero graphic novels of Alan Moore; French film directors Jean-Luc Godard and François Truffaut, and artists ranging from Daniel Buren to Josef Albers to Laurence Weiner.

The breadth of his influences is mirrored in the reach of his means of expression: videos, paintings, installations, manga. His all-encompassing view has worked in his favor since Parreno is one of France’s most successful exports on the contemporary art scene, with his pieces exhibited at galleries such as the Tate in London, the Musée d’art Moderne in Paris and the Guggenheim. A retrospective is planned for next year, beginning at the Kunsthalle in Zurich and traveling to Spain before finishing up in June at The Pompidou Centre in Paris, where Parreno wants to do something site specific. “Each time I do something, it’s new. For the moment, I am doing some drawings,” he says, a multitude of the stencil illustrations neatly hanging in rows on the wall of his studio. The drawings are mingled with text. “I always start work by writing—it’s the transfer of language,” explains Parreno.

Not that the artist transfers much of his own dialogue. Asked to indicate the works that mean the most to him, Parreno replies simply that they’re most recent ones, but then adds, “Even perhaps the next.”