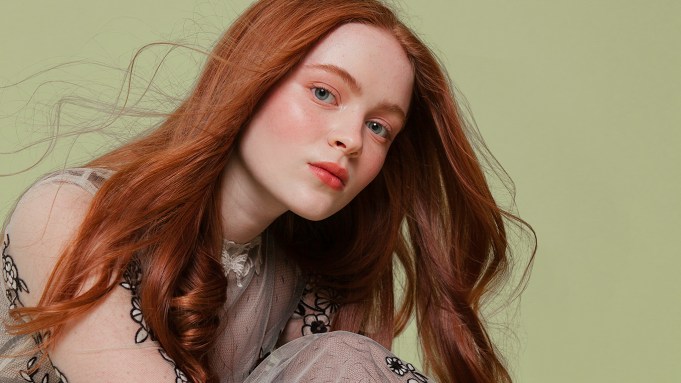 “It’s actually a nightmare in my house right now,” says Sadie Sink, on the phone after getting home from school in New Jersey. The source of said nightmare turns out to be her little sister’s play date, but the 15-year-old’s willingness to dive into the spooky and scary is in heightened mode given that her addition to the cast of “Stranger Things” for season two has her making the rounds — after school, naturally — to drop ever-so-slight teases about the new season.

The Texan native relocated with her family to New Jersey once her and her brother’s interest in performing outgrew community theater five years ago. Sink landed the role of Annie in the 2013 Broadway production and was seen in this summer’s “The Glass Castle” with Brie Larson and Woody Harrelson, before joining the Netflix series, which is back on Oct. 27.

“We were at a Giants game, and my manager told me, ‘Sadie, you have an audition for a show called “Stranger Things,”’ and I had just finished binge-watching it in a few days,” Sink says. “I’m usually the kind of person where if someone tells me ‘Oh my god you have to watch this show, it’s amazing,’ I kind of want to go against it and not watch it. But for ‘Stranger Things,’ I couldn’t resist. I had to watch it.”

She describes her character, Max, as “a rough and tumble skater girl [who] becomes friends with the boys at school. And that’s basically all I can say.”

The kid actors on the show have been widely adopted by the fashion world; Millie Bobby Brown being the most obvious example as a face of Calvin Klein who has become a fashion-forward fixture on the red carpet. Costar Caleb McLaughlin, a previous friend of Sink’s, landed on many a best-dressed list with his purple Gucci dinner jacket at this year’s Emmy’s.

“It’s definitely a perk — I’ve always been really into fashion, and this job gives me the opportunity to wear a lot of cool brands and work with a lot of amazing people,” says Sink, who already has brands such as Valentino and Chanel interested in dressing her.

Such grown-up fashion for a 15-year-old only seems to fit with the appeal of “Stranger Things.” “You’ll get 10- or 12-year-olds coming up to you saying, ‘Oh my god I love the show,’” she says. “But then you also have, like, my mom and dad who watch it.”