The artist rose to prominence after his colorful murals of Karl Lagerfeld and Anna Wintour appeared on New York's Kenmare Street. 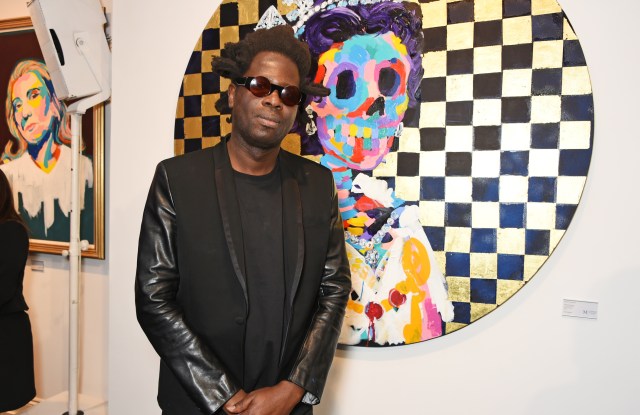 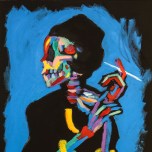 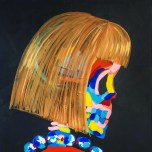 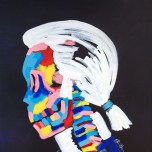 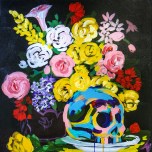 LONDON — New York-based Bradley Theodore has social — and fashion — X–rays to thank for his rapid transformation from street artist to art star and bestseller at London’s Maddox Gallery.

Theodore rose to prominence after his colorful murals of Karl Lagerfeld and Anna Wintour on New York’s Kenmare Street caught the eyes of the fashion industry and grabbed the attention of James Nicholls, the managing director and curator of Maddox.

Known for his large-scale works, use of saturated colors, skull motifs and vivid skeletal interpretations of Wintour, Lagerfeld, Kate Moss, Kendall Jenner, Gigi Hadid and Cara Delevingne, Theodore works on multiple pieces at a time and has also created murals on the streets of Hong Kong, London, Los Angeles, Oslo and Paris.

His second show, “Second Coming,” at the Maddox Gallery saw the majority of his large-scale pop works sell quickly. Tickets to his first exhibition, held at Maddox last year, completely sold out.

“Bradley is the most prolific seller that we have,” said Nicholls. “We all love his work. The staff loves selling it. It also increased in value dramatically from last year. What fascinates us about Bradley is his social media following. Every single person who comes here — about 55 percent on average — said they found the gallery through social media. Plus he’s accessible and he’s wonderful to deal with — he’s like family.”

Nicholls said that Theodore’s clientele is diverse in terms of age and wealth and said that even passersby have stopped in and purchased works directly. Prices range from 6,000 pounds to 100,000 pounds for a large-scale piece. “We can sell to very wealthy people — and we can sell to fashion Millennials,” he said.

Theodore, who was born in Turks and Caicos and raised in Miami, said that as a child he was drawn to drawing and painting. Today his inspirations range from fashion and music to historical figures such as Marie Antoinette, Coco Chanel, Frida Kahlo and Queen Elizabeth. He said his first artistic skeleton was Karl Lagerfeld. While he was in the process of working on that piece, Anna Wintour happened to walk by him when he was having lunch one day, and he thought he should paint the two of them together. After all, they’ve been friends and have worked together for a long time. He looked at various photographs for reference and reflected on all the changes in the fashion industry.

He said he started painting skeletons in an attempt “to go deeper, and to cut beyond the surface and look at the deepness of relationships. We all have a deep relationship with our friends. There are things that we know that can’t be seen.” The artist said he’s always been interested in fashion and has been going to shows since he was 19 years old. (Jeremy Scott and Telfar are among his favorite designers and brands.) Attending shows — and their after parties — led him to befriend a number of designers, including Donna Karan.

Looking ahead, Theodore would like to focus on Alexander Wang — whom he met during Frieze in New York — and Naomi Campbell.

The artist said he would like to collaborate with a brand one day. “I really want to make sure that I do the best that I can do and work with the best people,” said Theodore. “I’m a painter. I want to be the best painter I can be. If I do this, I want to work with the best person. I know definitely working with Hermès or Gucci or whatever I do, it will be outstanding. I can just see it in my head.”

An avid collector of scarves, he has amassed a number of them during his travels. “I’ve always loved silk scarves, and I have my own little silk scarves collection. Especially in Tokyo — you can get some really cool ones. Scarves are kind of funny: They are like canvases that you can wear every day. And when you look at the details, they are really works of art. “