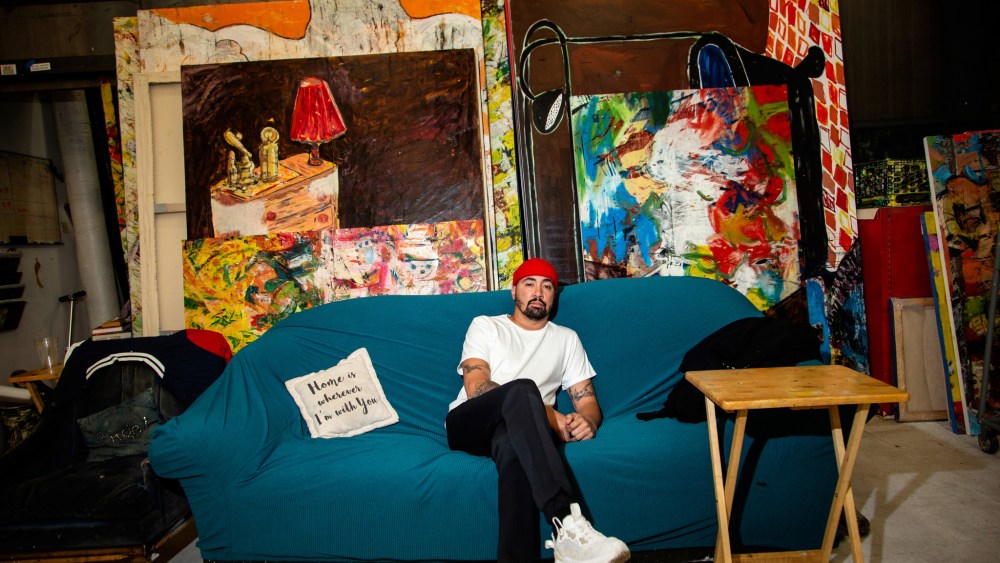 Angel Otero is ahead of schedule. It’s a few weeks before the opening of “Swimming Where Time Was,” his first solo exhibition with Hauser & Wirth in New York, and the work has already left the studio to be framed. But it feels appropriate to speak about his latest paintings in the absence of their physical presence; the paintings themselves are explorations of memory.

What’s left in his Brooklyn studio space reflects the artist’s past, present and future career: one wall houses new small canvases depicting individual objects (a fan, dentures, a rotary phone) painted at scale; a large abstract composition, which he has become known for, is nearby. And hanging over the room’s doorway are several shapes akin to jellyfish, cut out and affixed directly to the wall. They’ve been up there for years, and Otero notes that he’s recently been thinking about returning to the idea.

“Swimming Where Time Was” reflects the artist’s inclination toward both abstraction and figuration, and taps into elements of magical realism. “Like a Gabriel García Márquez book where you see something that is not fictitious, but it doesn’t necessarily mean that it’s real, either,” he says. In “Concerto,” goldfish float across the depiction of an upright piano. A glass with dentures rests on top of the instrument, a recurring object in the series — in “Sunny Gets Blue,” there are multiple false teeth next to a patterned armchair. Otero works with memory, tapping into imagery from his childhood home in Puerto Rico. Many of the objects he paints relate to his grandmother, items he found intriguing as a kid.

“I was always curious ‘why this is there, why is this that?’ I started writing down those memories as a late student in grad school, then I decided to start composing these paintings based on that,” he says. “I’m constantly thinking about my past, specifically my childhood and my family members, and I like to use that as a departure in most of the work,” he adds. “When you try to execute any reconstruction of that memory, things don’t always come out that perfect.”

Memories are fallible, and Otero’s work represents the many forms that recollections can take: as a concrete snapshot, a composite scene, or through the gestural strokes of an emotion. Installed next to “Concerto” is “One Hundred Dreams From Now,” an abstract painting composed using many of the same colors depicted in paint buckets at the base of the piano.

Notably, none of the paintings on view depict the actual people being referenced, although there is an element of portraiture and the ways in which items around a person can create an identity. Otero notes that he’s spent a lot of time thinking about absence and what it means in his work. “I don’t think I have a full answer about it,” he says. “Is it absence, or does it feel like an empty space? Or, without the necessity of a portrait, does it still feel like there’s someone there?”

There is also an element of collage in Otero’s paintings — painted items are cut out and arranged into the canvas, and he often works on plexiglass, scraping off dried oil paint and layering the resulting sheets. The technique stretches back to his MFA days as a thrifty way to use discarded paint on his palette, and also ties directly into his exploration of how memory itself is layered and transformed.

“Early in my career, I spoke a lot about how I made the paintings and how important process was for me. And it is, but the reality was that the work started taking this turn; outside of the studio, people were approaching it like this really cool process. ‘Oh, this is a scraper guy that does this thing,’” he says.

A poster of Bob Ross hangs above his studio couch bearing an inspirational quote — “No mistakes, only happy accidents” — and a nearby shelf houses a collection of gifted Bob Ross trinkets. The painter had a strong impact on Otero, who grew up in Puerto Rico watching his TV show. One day, he saw an advertisement for local Bob Ross-style classes, and he begged his mom to enroll him in the course. Otero went on to graduate from art school in Puerto Rico, and moved to Chicago in 2004 to get his MFA at the School of the Art Institute of Chicago. While in Chicago, he befriended another SAIC alum — Rashid Johnson, a close friend whose studio is around the corner in the stretch between Williamsburg and Bushwick.

Shortly before the pandemic, Otero purchased a second studio space in the Hudson Valley, a former 19th-century church.

“The church story plays a big role in how I went back to these sort of figurative works,” he says. “I was going through a bit of a creative crisis, and I needed to get away, so I went upstate,” he says. “Before that, I was more focused on these abstract works. When I was [at the upstate studio] alone, I started revisiting those paintings that I did 10 years before, post-school, early New York.”

He notes that being upstate allows him to tap into a different mental state; in New York, “there’s always this leak of the art world and the business of the art world,” he adds. “We do need to sometimes disconnect from that and just be human, just normal, and go back to being — I don’t know if ‘honest’ is the word — but just focusing on what we love doing.”

Back when being in a blue-chip gallery like Hauser & Wirth was a dream, when a young boy in Puerto Rico witnessed the snow-capped mountains and pine trees in a Bob Ross painting and saw magic.