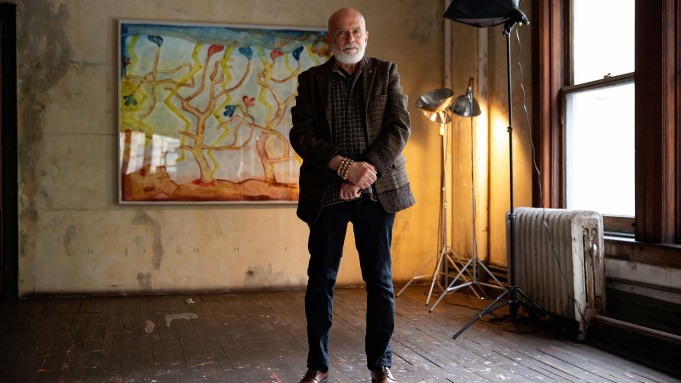 “Even the most optimistic person today will think that there is a cognitive error in the air,” says Francesco Clemente, seated on the orange sofa within his sprawling second floor artist studio overlooking Broadway in Manhattan. “Maybe things are not really known the way they should be known. And so I decided to go back to the beginning of the era,” he continues to explain. “I needed to go back in time and see where all this psychotic behavior began.”

Last year in the midst of the pandemic, unable to travel and mulling the chaos of current events, the artist turned to Homer’s “The Iliad.” The ancient story, replicated from oral renditions and then pieced together from written fragments, has undoubtedly changed over the course of several millennia. A similar spirit of replication is reflected in Clemente’s nine new paintings, currently hanging on the walls of Vito Schnabel’s gallery in Chelsea. The works, collectively shown as “Fragments of Now,” were painted over the course of the past year.

Clemente repeats the same visual imagery — a simplistic rendering of an ancient Greek helmet, painted in shades of sienna against a black background — in all of the paintings. The most notable variation in each is found underneath each helmet, where Clemente has inscribed fragments of text pulled from “The Iliad” in loose freehand along with the date of completion for each painting. He left that definitive detail up to a mix of fate and free will.

“I open the page randomly until I find [the right text],” says Clemente of selecting the accompanying words. “Whenever I find something, I never look for something better than what it is. I think that makes me an artist.”

On first and second glance the imagery is identical — red and black color palette, helmets with the same outline and embellishments — the differences emerge through nuance, for those who attempt the process of searching. In the final painting of the series, the shade of orange seems to glow a little brighter. “Just in the making of things they change,” says Clemente; this is clear also in how recollection of “The Iliad” has morphed over time. “And there is something to be said in making the same thing over and over again.”

On a table nearby, the artist was in the process of working on a watercolor; a swath of paints and brush suggested that he could return to work at any moment. A series of paintings of black flags flown against a blue background were created in the lead up to the 2016 election and are lined up at even, angled intervals within the lofty room. Clemente’s studio is also a decorative tribute to his ongoing relationship to India, where he moved as a young artist from his native Italy and established a studio practice before landing in New York. He returns to India often, and continues to collaborate with local artisans. Clemente notes that he’ll be on the first plane back to visit when travel opens back up.

Clemente, who lives a few blocks away in Greenwich Village, has a second studio in Greenpoint but has spent the entirety of the pandemic working out of his Manhattan space. The year has been punctuated by feelings of displacement, longing, and loss: “All of that is good subject matter for a painter,” he says.

The artist also often looks to the world of poetry — a 2018 show was inspired by Federico Garcia Lorca — and he has collaborated with some of New York’s most infamous to illustrate their words: Allen Ginsberg, Rene Ricard. A collaborative work by Ricard is framed on the wall next to the entrance to his studio. For his “Fragments of Now” paintings, the relationship is flipped: words serve to illustrate Clemente’s repeated visuals.

Despite leaning toward the war imagery for the visual component within the “Fragments of Now” series, all of the text he gravitated to made reference to nature. The paintings stem from that contrast: the noise of men against the silence of nature. “I could never choose a fragment that had to do with war,” he says. “I discovered in the text all these windows on nature. So there is the battle, but then there is the indifference of nature. And indifference of nature is the subject matter of our time, of this moment.”

Clemente is cartesian in his two ways of looking at the concept of “now.” There’s the vertical approach — us facing eternity — and a horizontal approach rooted in cause and effect. The most salient now is the pandemic, and the artist is keen to place the catastrophe in context. It’s affecting everyone everywhere (albeit unequally), so it’s hard to ignore. “It will be important after this is over to remember that probably two-thirds of humanity suffer a permanent pandemic of war, poverty,” he says.

The final painting in the series introduces a human presence back into the text. “The caption says, ‘our backs to the sea, far from our native lands.’ And I thought that is a nice caption to end the work. And also, in a way, that could be a caption for America,” he says.