Subjective as style is, it was fitting that Wednesday night’s ceremony covered a lot of ground. 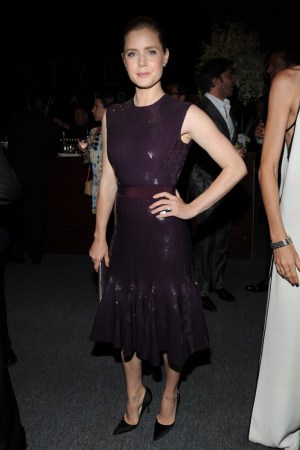 NEW YORK — Subjective as style is, it was fitting that Wednesday night’s Style Awards covered a lot of ground.

With few exceptions, the camera-ready presenters were as fashion-conscious as the 12 honorees at the Lincoln Center event. Katie Holmes held the room rapt when handing over the Designer of the Year award to Carolina Herrera; Amy Adams celebrated Cristina Ehrlich; Nicole Richie did the same for her go-to hairstylist, Andy Lecompte; Iman honored fellow model Joan Smalls, and Elettra Wiedemann talked up Prabal Gurung.

Taped for a Sept. 14 airing on the Style Network, the ninth-annual event had its share of fits and starts. Wiedemann was brutally honest while struggling with the teleprompter: “Sorry. I can’t read it. I have such bad vision. It’s huge, and I still can’t read it.” Even Holmes looked a bit jittery, clutching the back of her neck as she walked across the stage, and later standing a bit pigeon-toed with her hands stuffed in her skirt pockets. Perhaps the ponytailed actress had reason to be nervous: The first presentation of her Holmes & Yang collection is just days away. Holmes and Herrera talked shop backstage. “She’s ready, and she’s very excited,” Herrera said. “I wish her the best. She’s adorable.”

Adams also did a bit of backstage bonding. “The Master” actress joked around and posed for photos with “Girls” star Allison Williams, before Williams thanked TV costume designer winner Jenn Rogien for finding “just the right gross underwear” for the show, among other things. After Simon Spurr handed over the one-to-watch award to his buddy Ed Westwick, the “Gossip Girl” actor lingered in the wings so long that he asked for a bottle of Champagne.

Reed Krakoff, Katharine McPhee, Sandy Powell and Virginia Young were other winners who had reason to celebrate. And Catherine Malandrino, Dennis Basso and Ivanka Trump joined the festivities despite other commitments. “The trick is to only go out once during fashion week, especially as a designer,” Malandrino said.

As the event’s emcee, Iman had a different all-are-welcome message for the runways. “It is important to be inclusive and to celebrate all kinds of beauty,” she said.

Henrik Lundqvist, the most stylish athlete, had another kind of beauty in mind. “Playing hockey, I see a lot of missing teeth, bad haircuts and terrible suits,” he said. “But I also see some progress. I still believe the game of hockey could be stylish in a few years.”