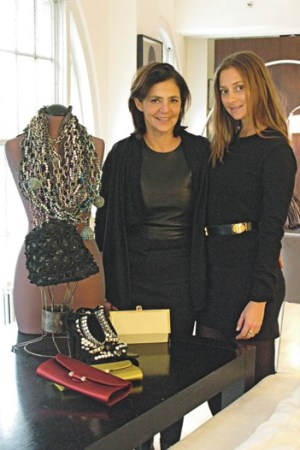 Irene and Marina Albright own a closet that would make Carrie Bradshaw swoon.

The mother-daughter duo have amassed a one-of-a-kind assemblage of high fashion that is among the largest privately held collections in the nation, which serves as a lending library for stylists, editors and celebrities — including “Sex and the City” costume designer Patricia Field, who outfitted Sarah Jessica Parker’s Bradshaw character in a number of Albright pieces for her two cinematic outings.

This story first appeared in the April 5, 2010 issue of WWD. Subscribe Today.

Located in a 7,000-square-foot loft at 62 Cooper Square in New York, the showroom holds 15,000 dresses and 10,000 evening gowns — think everything from Chanel, Dior, Prada, Gucci, Yves Saint Laurent, Valentino, Dolce & Gabbana and Celine to younger labels like Gareth Pugh, 3.1 Phillip Lim, Marchesa and Alexander Wang — plus thousands of sportswear items, accessories, hats and jewelry. There are rows of Hermès Kelly and Birkin bags and more than 7,000 pairs of shoes. (The business was originally called Imelda’s Closet, after Imelda Marcos, the infamously footwear-obsessed former First Lady of the Philippines.)

“There is nothing else like it,” says David Carl Robinson, a costume designer who has worked on films like “Zoolander” and “Confessions of a Teenage Drama Queen.” “For a job like mine, it’s invaluable. I might need a crazy pink top for a scene and it’s there. It’s such a compendium of fashion.”

Celebrities and models including Tyra Banks, Shakira and Caroline Trentini borrow head-to-toe outfits — for a fee — for red-carpet events and television appearances. Edie Falco, for one, wore a Prada dress from the Albright Fashion Library to the Golden Globes this year, and Britney Spears sports a Rodarte loaner on the cover of her most recent album, “Circus.”

The Albrights estimate about 20 percent of their business comes from stylists borrowing for public appearances, 30 percent from costume designers renting for movies and television — Anne Hathaway wore a John Galliano gown from Albright in a pivotal scene in “The Devil Wears Prada” — and 50 percent from advertising shoots. Both Beyoncé and Scarlett Johansson have worn gowns from Albright for L’Oréal campaigns.

“This place is a girl’s dream come true,” says Victoria’s Secret model Selita Ebanks, who was at the showroom recently, browsing for an outfit. “They have everything here — including pieces you can’t find anywhere else.”

With tighter shopping budgets due to the economy, fashion folk have been more eager to lease outfits for special occasions, says Irene, who founded the business in 1990. “It’s much more cost effective to rent, rather than buy, a $10,000 dress you’ll only wear once or twice. We get a lot of socialites and fashion editors in here during fashion weeks.”

Albright, who studied painting at the Rhode Island School of Design and taught at New York’s High School of Art and Design early in her career, got her start in the industry as a stylist in the Eighties. “I started collecting things. I wasn’t making any money, but I had a huge closet,” she recalls. “Other stylists started to ask if they could borrow things, and then they started renting.”

As a former stylist herself, Albright understands the value of operating a one-stop shop that offers such a wide range of labels and silhouettes. “The challenge with styling, as opposed to being a hair or makeup artist, is that having great taste and skill isn’t enough. You have to actually find the garments you need, and that can be a tough job. There’s all this begging and borrowing involved,” she explains.

At Albright, the racks are neatly organized by category and color. Stylists can find rows of neatly labeled white furs or gold evening coats, red spaghetti strap dresses or bejeweled vests. Most of the inventory is from the past five years, but there are also important archival pieces from the Eighties and Nineties, including instantly recognizable designs by Azzedine Alaïa and Tom Ford from his Gucci days. Daughter Marina, who joined the company three years ago, has focused on adding labels like Balmain and Chloé to the ever-expanding stockpile.

The duo acquire about 1,200 pieces a year, and sell older stock at a store they opened last year, called Mina Gallery, located at 32 Cooper Square. The Albrights buy from designer showrooms as well as at retail — but price tags don’t seem to phase Irene. “If I love it, I buy it — and then I figure out how to make it work,” she says. “Other business owners would probably cringe. For me, it’s instinctual.”