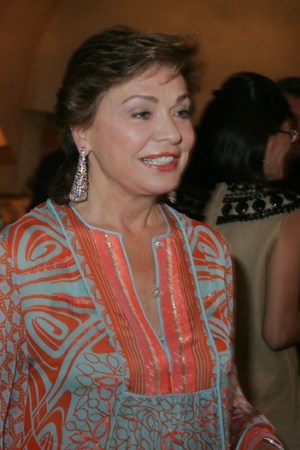 Social doyenne Maria Manetti Farrow kicked off the festivities with a cocktail party at her Villa Mille Rose estate Tuesday night. Waiters passed around chilled Bellinis made with white peaches from Farrow’s own orchard.

“These are the best Bellinis ever,” judged Cherise Moueix, owner of top winery Dominus.

Saudi Princess Deena Abdulaziz and her husband, Prince Sultan, who are summering in San Francisco with their three children, were happy to escape the Riyadh heat. “We adore the fog,” said Deena. “Believe me, for someone who lives in the desert, San Francisco summer fog is a great luxury.”

Elsewhere around town during the week, President Bush dined at the Swansons’ estate (they’re big Republican donors and Clarke Swanson is on the board of the Hoover Institution) and tended to more serious business with Gov. Arnold Schwarzenegger tagging along. King Abdullah and Queen Rania of Jordan, meanwhile, dined at Press in St. Helena with their family — and a huddle of bodyguards.