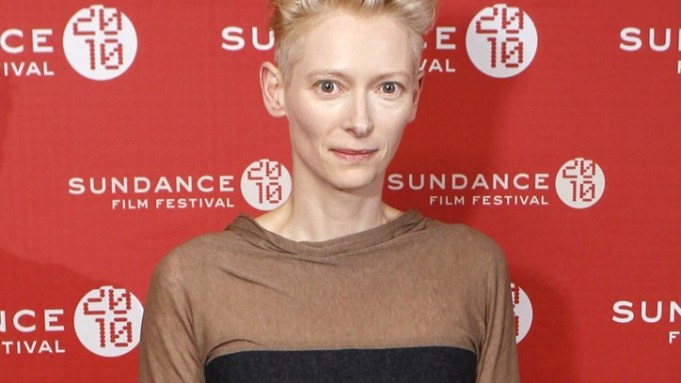 Not one to let a little snow stand in the way of her sense of style, Tilda Swinton has cut a swath through the Sundance Film Festival in Park City, Utah, this week wearing nothing less than Lanvin. For the premiere of her Italian film “I Am Love,” the actress paired a gray wool and nude jersey dress with black pumps that had a beige ankle strap and Lucite stiletto heel. Uggs they were not. Swinton also wore Lanvin — this time a brown zip-up suede jacket and rust colored leather trousers — to the Magnolia Pictures party at the Julie Nester Gallery. But for a stroll down Main Street, she went with a long Chanel trench.

Actresses like Naomi Watts (in town for adoption drama “Mother and Child”) packed more typical Park City garb of jeans, furs and puffer coats, but in Watts’ case, her puffer was designed by Tod’s creative director Derek Lam. Also seen making their way around town: Katie Holmes in a Chloé tunic, and Julianne Moore, who has in years past shown up in Fendi, but flew so under the radar this time her photo wasn’t even snapped, though her film, Lisa Cholodenko’s “The Kids Are All Right,” was one of the most anticipated premieres.