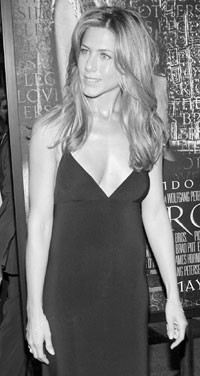 John Travolta says he’s ready to write his memoirs. He’ll tell all about his climb to the top of the Hollywood heap, his fall from grace and his comeback. All his co-stars, including Olivia Newton-John, Uma Thurman, Halle Berry, Nicolas Cage and Rene Russo, as well his directors, Quentin Tarantino, John Woo and Mike Nichols, will get equal time. That’s nice.

Neither his marriage to Kelly Preston nor his commitment to Scientology will go unaddressed. He’s meeting with publishers who are tempting with advances of more than $1 million. As if.

Sir Paul McCartney’s wife, Heather Mills, wants to launch a career on American television and Paul has agreed to move to L.A. to help her pursue her dream. She already has a Hollywood agent negotiating a deal with CNN for her own talk show and Paul has real estate agents looking for a suitable house in Beverly Hills to rent or buy. He also plans on recording a new album on the West Coast and touring the U.S. next year.

Fans of the late Queen Mother — and they are legion — will be thrilled to hear that her grandson, Lord Linley, who crafts exquisite woodwork, is making a replica of her coronation chair. And that the workrooms of the late legendary couturier, Hardy Amies, her official dressmaker for 48 years, are re-creating the wedding dress she wore when she walked down the aisle to marry King George VI, the present Queen’s father. Both of these treasures will be auctioned off — along with 11 other lots, each representing a different decade of her glorious and productive life. This will happen at Sotheby’s in London in April and will benefit the Queen Mother’s Memorial Fund to raise money for a shrine for her, a garden with a monument in Edinborough and the installation of memorial gates at Glamis Castle, where she was born and spent her childhood. It is being called “A Memory Eternal.”

Clarence House in London is where the Queen Mother lived for 50 years and where her grandson, Prince Charles, lived with his parents during his early years. Now beautifully restored, it is the present residence of the Prince of Wales. Talk about elegance: The long entrance hallway carpeted in red is also warmed with Persian rugs, and the rooms leading off it are reservoirs of gilded mirrors, fine art and beautiful china — all stylish examples of a bygone age, being maintained by a man who understands the importance of style and presentation. There’s the Morning Room, with its soft, pale blues; fine Chelsea porcelain, and a collection of pictures, including artists from Monet to Noel Coward. The collection of books in the library has been amassed over the past century. In the dining room with colors taken from Pompeii, a portrait of Queen Elizabeth hangs from the wall along with 28 painted views of Windsor Castle.

This is where the Prince greeted his guests from the Prince of Wales Foundation, who were then led through a secret corridor into St. James’ Palace, there to dine in the Picture Gallery, with the tables covered in blue damask and centered with blue hydrangeas and white roses. Then a band came on stage and Elaine Paige, the first lady of British musical theater, sang the songs that have made her famous on Broadway. Then the Prince whispered to Joan Rivers something like, “Get up there on the stage and say something funny and make them laugh.” That’s all the warning she got. But she did and they did.

Looking on were the lovebirds Hilary Geary and Wilbur Ross; Genevieve and Frederick Ryan; Lily Safra; Diane Sawyer; Patricia Hearst and Bernard Shaw; Marylou Whitney and John Hendrickson; Blaine and Robert Trump; Patricia Altschul with Mario Buatta; Lee Annenberg, wearing her Order of the British Empire medal; George Farias with Anne Hearst; Evelyn and Leonard Lauder; Dina and Brad Martin; Peggy Noonan, and on and on and on.

According to the English tabloids, Brad Pitt, even though it seems a bit far-fetched, is reportedly thinking about buying his wife, Jennifer Aniston, the yacht “Kalizma,” the 165-foot Edwardian tub charted by Elizabeth Taylor and Richard Burton in the Sixties. They sailed it from one hot spot to another throughout their infamous love story. Supposedly, Brad just wrote a check for $6 million to an Indian brewing tycoon for the 98-year-old boat, which was named after the Burtons’ three daughters: Kate, Liza and Maria. In declaring his love for his wife, couldn’t Brad consider a big diamond, as well? Remember how Burton presented Taylor with her legendary 69.4-carat diamond ring while cruising the Mediterranean on Kalizma? Doesn’t the “Aniston Pitt diamond” have a nice ring to it?

Regarding that sort of thing, Jodie Kidd, the 25-year-old English supermodel who ended her turbulent five-year relationship with polo player Tarquin Southwell a few months ago, was showing off a large diamond ring on her engagement finger at the Veuve Cliquot Gold Cup polo match in England last weekend. The ring was a gift from her new boyfriend, Aidan Butler, a 27-year-old Internet entrepreneur. The two met during the Gumball Rally, the glamorous car race through Spain, Morocco and France’s Provence region in May. Although the 6-foot, 1-inch Jodie claims the diamond is only a friendship ring that wouldn’t fit on any other finger. There are those who say the couple have decided to marry and are only delaying the official announcement because Jodie’s sister, Jemma Kidd, also a famous model, just got engaged to the Earl of Mornington and she doesn’t want to overwhelm the family with two high-profile weddings. High profile is right. The Earl of Mornington is the Duke of Wellington’s heir.

Beyoncé Knowles, who met the Prince of Wales when she performed for the Prince’s Trust in May, has fallen in love with a five-story house in the Chelsea section of London and has offered $6 million for the property. The star wants to spend a lot more time in England, where she hopes to indulge in her latest passion for painting in oils, which she started for therapeutic reasons — don’t ask — and has become almost an addiction, one she shares with Prince Charles, you’ll be overjoyed to learn.

Every year in Saratoga, Marylou Whitney and John Hendrickson give a big party at Canfield Casino, where, for years, the elite have met to eat. This year, in honor of the 77th Running of the Whitney Stakes, the gala, to be given on Aug. 6, is called “A Night in Mexico.” Do not wear a sombrero or a shawl when you go to this because costumes are frowned upon. Olé.

Also, Evelyn Lauder and Libby Pataki are giving a luncheon in honor of Marylou on Aug. 19 at The Reading Room, another exclusive Saratoga gathering room. It will benefit The Breast Cancer Research Foundation. Marylou and John are still reeling over the surprising victory of their horse, Birdstone, in the Belmont.

Cornelia Guest; Cece Cord; her daughter, Elisabeth; Mario Buatta; Stephanie March; Zang Toi; Cynthia Rowley; Jamee and Peter Gregory; Cynthia and Dan Lufkin; Lisa Jackson; Annie Churchill; Andrea Stark, and Nicole Miller are among the hosts of Safe Horizon’s Sunset Celebration at the oceanfront home of Jane and Jack Rivkin in Easthampton next month. Safe Horizon has child advocacy centers throughout New York, so there will be games and goodies for the kids and caviar for their parents.