A possible bestseller for Bob…Pitt stop in Dallas…From Russia with love — to Angelina Jolie. 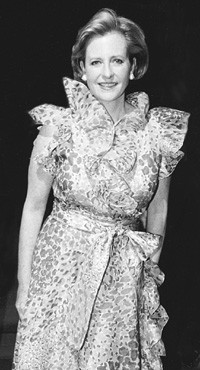 Bob Colacello, the author and Vanity Fair special correspondent, has spent the last six years writing “Ronnie & Nancy: Their Path to the White House, 1911-1980.” Just published by Warner Bros., the book is a remarkable accomplishment, capturing the spirit of those exciting years. Bob Colacello is, of course, a personal friend of Nancy Reagan’s, the one she entrusted to write this story, and as such he was given her full cooperation, which meant all the difference.

How definitive is it? Not one foot of that path has escaped his attention and he has mined every aspect of this remarkable couple’s remarkable relationship. From the book’s beautiful cover of the Reagans together in their prime to the last page of this incomparable book, we meet them as never before. What could have been a dull and plodding account is instead an exciting description of their years together before he became president. If Mr. Colacello does not have a bestseller on his hands, it will come as a surprise to those who have already read it.

This story first appeared in the October 20, 2004 issue of WWD. Subscribe Today.

So now the author is in California celebrating the book’s publication at lunches and dinners given by such as Betsy Bloomingdale, Wendy Stark and Sandy Gallin, and getting ready to deliver a lecture at a book signing at the Reagan Library this month. But before he left for all that, right here in his hometown of New York he was the guest of honor at a tremendous reception given by Jo Carole and Ronald Lauder among the beautiful paintings at Ronald’s Neue Galerie. Everyone was there, from Gov. Pataki to Happy Rockefeller to Evelyn and Leonard Lauder, Countess Consuelo Crespi, Veronica Hearst, Patty Cisneros, Gale Hayman-Haseltine, Lauren and John Veronis, Jamee and Peter Gregory, Ahmet Ertegun, Wayne Lawson, Carolina and Reinaldo Herrera, Linda and Morton Janklow, Jane and Peter Marino, Kay Meehan and Billy Banks, Richard Meier, Princess Alexandra of Greece, Jamie Niven, Hannah Pakula, Bob Colacello’s mother, Libby, and his two sisters, Mrs. Mark Williams and Mrs. Gary Mead, and on and on into the night.

Matt Damon has gone on record in Germany’s Brigitte Magazine saying that the person he will probably end up growing old with will probably not be his current girlfriend, interior designer Luciana Barroso, nor any one of his many exes, including Winona Ryder, Minnie Driver, Odessa Whitmire or Eva Mendes.

No, Matt says, it will be his best friend, Ben Affleck, who will be by his side in his twilight years. “I can imagine growing old with Ben. My longest relationship with a woman lasted two and a half years, which is short when I consider how long I’ve been friends with him.” No word on what Ben or his new love, Jennifer Garner, think of this. Maybe not too much.

Brad Pitt is now the front-runner to play J.R. Ewing in the big-screen version of the famed soap opera “Dallas,” to be directed by Robert Luketic, who made “Legally Blonde” with Reese Witherspoon. Larry Hagman, the original J.R., gave his two cents about the casting. “I’ve heard they’re going to cast Brad as J.R., but I was kinda hoping it would be Bruce Willis. Bruce is funny and he has big muscles.” And he can be big miscast, too.

Angelina Jolie has just returned from a secret trip to Moscow, where she is preparing to finalize the adoption of her second son. Angelina, who has just been named the sexiest woman alive — are all the polls in? — requested a “blonde boy with blue eyes.” She spent a week in Moscow visiting orphanages until she found seven-month-old Gleb and swept him into her arms proclaiming him “my son!” Angelina, who already has a three-year-old adopted son from Cambodia, says, “I prefer to adopt. With every child I adopt, I save a child from a life in an orphanage.” She will have to visit Russia several more times to get legal clearance to bring Gleb back to the United States. No word yet on whether she will study Russian, buy a house in Siberia and hire a Russian nanny so he will be connected to his Russian roots. By the way, Gleb is belg spelled backwards.

Sen. Hillary Clinton is the honorary chairman of Community Access’ 30th Anniversary Gala at Chelsea Piers on Oct. 27. Bette Midler, Christie Brinkley, Debbie Harry and Linda Ronstadt are on the committee. Last year, the late legendary fashion photographer Francesco Scavullo was honored. This year, it’s Judy Collins. Katie Couric has arranged a breakfast on the set of “The Today Show” to be one of the auction items. You can watch her and Matt Lauer sip coffee together. Is that not worth fighting for?

The notorious 200-foot yacht Lady in Blue on which such supes as Elle Macpherson, Heidi Klum, Eva Herzigova and Naomi Campbell have slept in the master bedroom of its captain, the forever-Italian Flavio Briatore, has just been sold for many millions. Apparently there were just too many memories connected to the girls and the boat, and that was, believe it or not, beginning to cramp his style. Not to worry, Flav has already ordered a new one, bigger and better. But can he get bigger and better girls?

Hugh Grant and the heiress Jemima Khan are one step closer to something permanent. Hugh has introduced Jem to his father, who thinks she is the cat’s meow. And so she is, with her looks and all that money. The pair, who have been together since last spring, are now talking about a summer wedding. Time will tell. It always does. Here today, gone tomorrow.

Scarlett Johansson flew to South Africa to keep her boyfriend, Jared Leto, in line after rumors reached her that actress Tanit Phoenix had caught his eye on the set of the film “Lord of War.” Tanit is from Cape Town, where they were headquartered, and just had to show Jared the sights. Anyhow, Scarlett was not there more than a few days when her globe-trotting caught up with her and she fell ghastly ill with tonsillitis. The 19-year-old bombshell had to be flown home to L.A. for an emergency tonsillectomy and lots of bed rest. Sounds like voodoo to me.