Opening night at Carnegie Hall for the 114th season…Jodie Kidd combs the English countryside for the perfect home for her budding family. 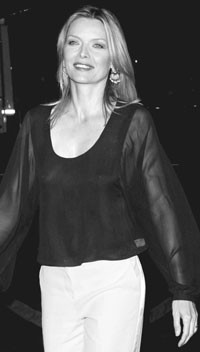 Catching up with — well, everything. The opening night of Carnegie Hall celebrating its 114th season was a dazzlement with Christoph Eschenbach conducting the brilliant Philadelphia Orchestra in an all-Strauss program; the beautiful soprano Renée Fleming looking and singing like an angel — minus the wings, but enveloped in clouds of midnight blue chiffon, and Yo-Yo Ma, the brilliant cellist and master of stage presence, mesmerizing the audience, all of them 100 percent music lovers, of course. Else, what were they doing there, don’t you agree? It was bliss in the boxes. Pretty ladies in pretty dresses wearing pretty bangles, baubles and beads, watching and being watched in the tiers’ front rows. Certain gentlemen in black tie looked appropriately distinguished, and not one single soul in the audience dared to cough.

The admirable Mrs. Walter (Lee) Annenberg, an ardent supporter of the arts, was the honorary chairman of the gala night, and Mercedes and Sid Bass, and Mr. and Mrs. Sidney Kimmel of the great Kimmel Center in Philadelphia were the co-chairs. You can always count on Mercedes to make an entrance and she made this one in strapless scarlet satin with a matching stole and a brooch on her bosom too stupendous to mention — the brooch, not the bosom. The fashionable Mrs. Kimmel wore a black sheath that fit her form in all the right places.

Among the guests in the Bass’ first-tier boxes were Jayne Wrightsman in black and jeweled earrings that almost grazed her shoulders, Annette de la Renta in dramatic black and a chic little chignon, Diane Sawyer in a celadon green top and black trousers and Nancy Kissinger, very Chanel, in a black evening coatdress with a high portrait collar.

Barbara Walters wore a black cut velvet jacket with black lace cuffs and collar, and almost everywhere you looked there was more black, and whoever said black is the new black besides me has a finger on the New York fashion pulse. This color will always be with us as long as there is a New York.

As for the crowd, everywhere you looked you saw Mike Nichols, Don Hewitt, Mica and Ahmet Ertegun, Beatrice and Julio Mario Santo Domingo, Caroline Kennedy in a black pantsuit with silver beaded cuffs with her husband, Ed Schlossberg, Carnegie Hall chairman Sanford Weill and Joan Weill, and on and on into the night.
(As for Caroline, she has been a lot of places lately. After she presented an award to her cousin Maria Shriver at the Rita Hayworth Gala, she jumped in her car and rushed off to One Beacon Court to present Agnes Gund with the Municipal Art Society’s Jacqueline Kennedy Onassis medal and later in the week made a charming speech at the Arts in America dinner at Cipriani. As Agnes Gund has said, Caroline is the personification of everything her mother meant to the world.)

After the Carnegie concert, hundreds and hundreds of guests flocked to the Grand Ballroom of the Waldorf for a grand dinner. You will be happy to hear that the night raised a staggering sum to support Carnegie Hall.

The famous Maestro Valery Gergiev and Mrs. Gergiev were seated with Mercedes and Sid for the concert and with Joan and Sanford Weill for the dinner. However, Maestro Gergiev had to leave the dinner right around the time the first course was being served because he had to catch a flight back to Russia, where he was conducting there the next night. Who else would tell you these things?

***
Michelle Pfeiffer always said that her secret to a happy marriage was not mixing her professional life with her personal life, but now her husband, David Kelley, has decided to put her opinion to the test. He is trying to persuade Michelle to appear in his new series “Boston Legal,” with James Spader and WIlliam Shatner. Kelley says she would be great. “The trick would be convincing her to ever work with me.” Sure.

Supermodel Jodie Kidd, who got engaged to her tycoon boyfriend Aidan Butler in August, is combing the English countryside looking for the perfect home for their little family, which at the moment includes seven horses, nine dogs and two cats. They say they have to work fast as they are on all sorts of loose ends since Jodie sold the cottage she shared for five years with polo player Tarquin Southwell. The six-foot stunner and Aidan will marry in Peworth, a charming town in the south of England, but they’re waiting until 2006. Jodie wouldn’t dream of stealing the spotlight from her older sister, Jemma, who is marrying the Earl of Mornington, the Duke of Wellington’s heir, next summer at the Kidd family home in Barbados. Well, good for Jemma.

Nicole Kidman must have breathed a sigh of relief in Paris last week when the rabid paparazzi turned their blinding cameras on Princess Caroline and her children: Charlotte Casiraghi, in a drop-dead black strapless dress and a blinding diamond brooch, and her two good-looking brothers, Andrea and Pierre, in white shirts and jeans, at the party introducing the new Chanel No. 5 ad at the Hotel Pozzo di Borgo. A lot of people, including Karl Lagerfeld, were said to be so grateful to the princess and her beautiful brood for giving them a break from Europe’s aggressive shutterbugs.

Here in New York on Oct. 23, Charlotte Ford, Eva Dillon, Al Roker and his wife, Deborah Roberts, are among the hosts of the “Light Up a Life” costume party to benefit the New York Presbyterian Hospital’s Pediatric Clown Care Program at Toys ‘R’ Us. One thousand kids, parents and grandparents will descend on Times Square to hear the Yale Whiffenpoofs sing, ride a giant indoor Ferris wheel and watch performers from the Big Apple Circus. Heather Sargent is the chairman of it all.

Have you heard that superstar Beyoncé will join headliners Faith Hill and Josh Groban at the Carousel of Hope Ball at the Beverly Hilton in Beverly Hills on Oct. 23. I can’t tell you how thrilled all those carouselers are at the news that the knockout will perform.