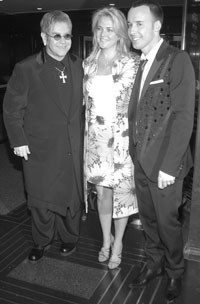 Sir Elton John, in a long-tailed black jacket by Hedi Slimane with embroidered flowers creeping up his sleeve, wowed the audience at his Radio City Music Hall opening Tuesday night. The finale was Elton’s first big hit, “Your Song,” which he sang with Juilliard alumna Renée Fleming, the gorgeous soprano who wore a midnight blue chiffon off-the-shoulder beaded dress by Gianfranco Ferré. For the dinner after the concert at the Rainbow Room, Renée changed into an Issey Miyake creation that she called her “romaine dress,” as it was the exact color of the lettuce you either love or hate.

The night raised $1.3 million, to be split evenly between The Juilliard School and The Royal Academy of Music, where Elton studied.

Cornelia Guest, in a striking yellow flower-dotted coat and matching skirt by Dolce & Gabbana, was the chairman of the evening, along with Elton’s partner, David Furnish, in a sequined black tuxedo jacket by Yohji Yamamoto. As for the honorary chairmen, Evelyn Lauder wore a beautiful white silk blouse and a black satin skirt and Cynthia Lufkin was in a hot pink paisley sheath by Ferré.

Then there were Lauren Bush in Zac Posen; Gillian Hearst-Shaw in Escada; Amanda Hearst in Christian Dior; Eva Dillon in a long lavender Vera Wang; Michele Klein in Lacroix’s pink and gray patchwork jacket; Julia Wallace in a flowered gown by Karl Lagerfeld; Bettina Zilkha in Versace, and Dayssi Kanavos in a pink Valentino.

Among the guests leading the standing ovation in Radio City Music Hall were Candice Bergen, in an acid green satin jacket; Sharon Bush; Ashley Bush; Deborah Norville; Dylan Lauren, in hot pink and a black shawl designed by her daddy, and last but never least, set designer William Ivey Long. It was a night to remember and a performance to treasure. Renée Fleming certainly thought so. She kissed Elton at the dinner and said, “It was an honor to sing with you tonight. You are a legend and an icon and I love you.” Me too.

Gwyneth Paltrow and Chris Martin will move out of their house in London’s Belgravia and move into Kate Winslet and Sam Mendes’ place in Belsize Park. The Martins bought the five-story town house from Kate and Sam for $5 million and will spend maybe another million for renovations.

The Mendeses will move into a 14th-century, eight-bedroom manor on 22 acres in the Cotswolds with a barn they’ve turned into a movie theater and rehearsal room, for which they’ve shelled out $7 million. Who doesn’t know they can afford it.

Brad Pitt and Jennifer Aniston are investigating summer houses on Lake Como. B and J were caught taking detailed pictures of Villa Pliniana, a lakeside Renaissance beauty, from their speedboat. The 16th-century palazzo is one of the most famous properties in Italy and has played host to the likes of Franz List, Byron, Shelley and Stendhal. The villa is for sale for $10 million. And who doesn’t know they can afford it.

A great, glittering gala, opening the fall season, will be held at Sotheby’s on Sept. 20. The American Friends of the Hermitage, Russia’s famous treasure trove, are hosting a benefit for the world-famous Museum, the jewel of St. Petersburg. Ten of the reasons the gala will glitter is because 10 masterpieces from the Hermitage’s treasury are to be presented for the delectation of the guests. Also, a concert will be performed featuring members of the Hermitage Orchestra and Alexander Pirozhenko, the prize-winning young Russian concert artist.

Governor and Mrs. Pataki are the honorary chairmen and Mikhail Piotrovsky, director of the Hermitage, is the chairman of the committee of such worthies as Prince Nicholas Romanoff, Princess Firyal of Jordan, Dr. Edward Pillsbury, Mrs. Edmond Safra, Mrs. Charles Wrightsman, Beatrice Stern, Mrs. Leon Black, Patricia Patterson, Pierre Durand, Alexis Gregory and Mrs. Peter Gregory. Those not wearing black tie to the gala will be poleaxed at the door.

This extravaganza will be a prelude to Hermitage Week at Sotheby’s, when guests of the gala will be invited to hear a lecture by Robert Massie on Catherine the Great, as well as a concert by the Hermitage Orchestra. Oh, and for those who delight in contemplating dream cars that cost a fortune, a Maybach will be on display at Sotheby’s throughout the week.

Lilly Pulitzer is a fashion icon and really that’s that. This is the designer who created a darling little short, printed sundress years ago and called it a “Lilly.” It became a runaway success and a brand name. A look that women addicted to chic and easy lifestyles loved. Not only in Palm Beach where she lives, but in many smart places everywhere the sun shines.

So it’s no wonder that the Historical Society of Palm Beach will celebrate her with an exhibit and a dinner-dance on Dec. 2, to be called “Lilly Pulitzer: The Look of Love.” Although her delicious designs through the years will be showcased, it will not be called a retrospective. She is too active and vibrant and of-the-moment for that. What it is, is a salute to the lady “as a creator, a businesswoman and a citizen,” says Steven Stolman, the chairman of the evening.

Of course, le tout Palm Beach will be there — already one hears that Club Colette, the resort’s beautiful party place, is much too small. But Lilly, who — imagine this in the fashion world — is reluctant to draw attention when it comes to her personally, has promised an intimate evening. Her acceptance went like this, “Oh, all right — as long as I don’t have to say anything.” In a me-me-me society, she is one of Palm Beach’s truest treasures.

Lorraine Bracco will slip into a long white sheath by Douglas Hannant and a pair of diamond earrings by Gilan when she attends the Parrish Art Museum Gala on Saturday night in Southampton. The artists’ committee includes Chuck Close, Eric Fischl, April Gornik and Cindy Sherman.

The gala’s theme will be executed by Antony Todd in black and white and Bentley Meeker will do the lighting.