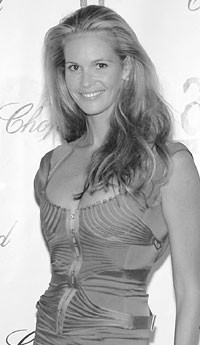 If you died and went to Chinese food heaven, would you be lotus eater enough to call for roasted black cod with black bean dressing, shredded bok choy and crispy lotus root with a steamed spring onion bun and sesame wafers? Or would you be a gourmet knowledgeable enough to request jasmine tea-smoked quail with oriental leaves, lychees, candied walnuts, Asian crest salad and sesame dressing? Or would you even imagine asking for glazed duck breast with noodle cake, green beans with water chestnuts and snow peas, sweet ginger and citrus peel and an oven-dried pineapple wafer? And bring this awesome feast à la Orientale to an ending with desserts of dark and white chocolate, kumquat, passion fruit and praline sesame mousse? All served with fine wines from Waddesdon Manor’s cellars — Waddesdon being maybe the most famous Rothschild country house in the world? This list of delicacies made up the staggering menu at Sir Elton John’s famous White Tie and Tiara Ball. Lord Rothschild (Jacob) himself was there in a white dinner jacket, sampling everything Chinese and sipping his own wines.

This was the sixth celebration of this grand annual ball given by Elton at his equally grand country house, Woodside, located in Windsor, and as usual it was crowded with international socialites and celebrities — not all in tiara and white tie, but enough to make it matter. The theme, as you no doubt deduced from the menu, was Imperial China, and a few guests even came in historical Chinese finery. Princess Olga of Greece, well known in New York and dressed in white satin regalia and the requisite obi, looked beautiful if not 100 percent Madama Butterfly. (No wig, it was just too hot.)

Elton’s house and wonderful gardens looked spectacular — as Imperial China-like as you can get in a Berkshire countryside. Somersaulting acrobats, chanting Shaolin monks and a Chinese opera company were among the surprises during cocktails on the sweeping grounds. Later, the guests made their way to the luxurious decor of a Chinese marquee, where each brocade-covered dinner table was centered by a ravishing miniature Chinese lake with floating blossoms. (As the world knows, England, along with the rest of Europe, has been soccer-mad with the European Cup championships going on. So many of the guests, including Lord Rothschild, carried their cell phones to the tables to keep up with the scores. Every time England scored that night, a huge shout erupted from the crowd and from those who were watching the game on the huge television set someone had smuggled in. Unfortunately, England lost the game and Portugal won — eventually losing to Greece in the final — but that doesn’t mean there won’t always be an England.)

Elton and his band entertained the crowd, and Mary J. Blige flew all the way from Amsterdam just to rock in her sequins. Between the soccer shouts and the loud music, you could hear your skull split. But it was wonderful. The crowd, young, middle-aged and even slightly elderly, all stood and shook whatever they had that was shakable. They love their Elton.

Sir Ian McKellan spoke from the podium about the great good the Elton John Foundation (the ball’s beneficiary) does for AIDS, and the auction brought in millions for the charity.

Before the big party, Lily Safra, chic and stunning in a black, beaded Chanel, gave a cocktail party at her wonderful modern house in Belgravia, the London place she recently bought from Mary Wells Lawrence, the American advertising icon. Lily transported her guests to Elton’s ball in a private coach — among them Lynn Wyatt of Houston, in grass green taffeta and grass green emeralds; Princess Olga; Olga’s fiancé, the Italian millionaire Gianni Pigozzi; Donna and Bill Acquavella of the prestigious New York gallery; Marina Palma, the Italian beauty; Lord Rothschild; Lord and Lady Foster; her pretty blond granddaughter Lily Elia; Robert Higdon (he is the Prince of Wales’ man in Washington); and Karyn and Joel Silvers.

Standouts in the marquee crowd were such as Elle Macpherson; Liz Hurley; Lord and Lady Linley (he is the Queen’s nephew); Lord and Lady Dundas of the Asprey Dundases; Rod Stewart; Marguerite Littman (American-born, she is one of London’s liveliest hostesses); and certainly David Furnish, Elton’s partner and a co-host of the ball, who spoke eloquently while the crowd cheered. And one must never forget Caroline Gruosi-Scheufele of Chopard, who has tremendously supported Elton’s ball for the last five years. Those Chinese birdcages Elton had hanging in his garden were filled with jewels — Chopard jewels. And never forget that, since 1992, Elton’s foundation has distributed more than $40 million in grants worldwide.

Prince Albert of Monaco arrived in Southampton this weekend for his annual visit, and Julia and David Koch have invited 48 friends over to their seaside manse for dinner to meet him. Not that many of them haven’t met him before, but you never know. The dinner will be followed by drinks and dancing for some of Southampton’s most decorative ladies and gents. After all that, Julia and David are off for a European vacation but will return in time to serve as chairs of Southampton Hospital’s annual gala on Aug. 7. The other chairmen include Vera Wang and Arthur Becker, Whitney and James Fairchild, Tory and Christopher Burch, Jamee and Peter Gregory and Pamela Gross and James Finkelstein. The party’s theme is “Enchanted Garden,” and interior designers Lisa Jackson and Alex Papachristidis will turn the tents into just that. Robbins Wolfe will be in charge of the cuisine, and Steven Spielberg and Kate Capshaw, Christie Brinkley and Alan Alda are among the night’s sponsors. Perri Peltz will be the evening’s emcee, and Barbara Page Galt will chair the whole shebang.

Sting’s wife, Trudie Styler, has been named National Ambassador to UNICEF UK’s End Child Exploitation Fundraiser Appeal. She will work alongside fellow ambassadors Ralph Fiennes and Jemima Goldsmith Khan, whose recent separation from Pakistani diplomat Imran Khan filled the London press. After all, she is a great English heiress. Mrs. Sting has pledged to raise over $1.5 million by staging a gala to help fund the long-named program and has asked her friends Madonna and Kate Moss to help out.