Forget Sunday in the park with Georges, this is Marlborough country …Elton John sets a Radio City gig to benefit Juliard and the Royal Academy. 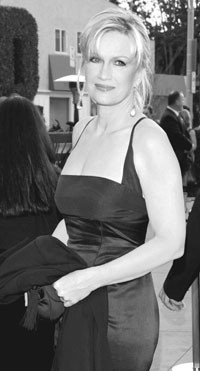 London: Forget Sunday in the park with Georges.

How about Wednesday, Thursday, Friday, Saturday, Sunday, Monday and Tuesday in Buckingham Palace, St. James’ Palace, Clarence House, the Tower of London, Sir Elton John’s country house in Windsor, Harry’s Bar and Blenheim Palace? Not with M. Seurat, who doesn’t get around much anymore, but with beautiful Queen Anne-Marie and King Constantine of Greece; their really gorgeous son, Prince Nicholas; the Prince of Wales; Camilla Parker-Bowles; Lily Safra, superb in Chanel’s greatest new hits; Elton John; David Furnish; Mary J. Blige; Elizabeth Hurley; Lord and Lady Linley (he is Queen Elizabeth’s nephew); the Honorable Leonore Annenberg (the American philanthropist and diplomat who just received the Order of Commander of the British Empire); Elaine Paige, the Brit singing star; Carol Price, former ambassadress to the Court of St. James’; Princess Olga of Greece with her fiancé, Gianni Pigozzi; Lynn Wyatt; Joel Rosenthal, the designer of fabulous jewels forever known as JAR; Joan Rivers, in white fox and black feathers (not worn together), and Marylou Whitney and John Hendrickson (they were being congratulated on the big win at the Belmont Stakes of their horse, Birdstone, while Smarty Jones looked on).

It has been said there are only 500 people in the world. So now you know where a lot of them were. They will all be sorted out in next week’s columns and put in their proper settings.

Many of them — and 350 others more or less like them — flocked to spectacular Blenheim Palace, the stately home of the Marlborough family, an hour’s drive from London, for the Duke and Duchess of Marlborough’s magnificent Blenheim Ball. The ladies were glamorously gowned and bejeweled, the gentlemen wore white tie, and of course there was a moon. There wouldn’t dare not be. What seemed like a million flowers raised their heads in every nook and cranny of the Great Hall, freshly plucked from the vast palace gardens. Madly popular with the creamy set, Samy Goz and his orchestra played for the dancing, which lasted until 3 a.m. There were toasts to her Majesty the Queen and President Bush and for dinner there was smoked salmon, roast lamb and summer pudding.

Every Marlborough now breathing was there, plus oodles of Spencer-Churchills, that being the family name. The Duchess of Marlborough, called Rosita, was all in blue and wearing the family tiara. The Churchills included Jack, Randolph, Winston and his wife, Luce; Jane; Charles; the Marquess of Blandford, the Duke of Marlborough’s son and heir; Lady Alexandra Churchill, and Lady Henrietta Churchill.

Parading through the perfumed pack were such guests as Serena and Neil Balfour (Serena is the Duke’s niece); Sir Anthony and Lady Bamford; Prince Khalid Bin Bandar; Cristina de Caraman; Marianne and John Castle; Jackie and Paul Desmarais of the Canadian billions; Dame Vivien Duffield and Sir Jocelyn Stevens; Tina Fanjul; Tom Ford; Denise Hale; Carolina and Reinaldo Herrera; Jade Jagger; Stella McCartney; Jim Mitchell; Mica and Robert Mosbacher, who were on their way to Africa to hunt water buffalo —can you believe it?; Sir Evelyn and Lady Rothschild; Arnold Scaasi; Parker Ladd; Nicholas Soames and Lady Soames; Sir Mark and Lady Weinberg (she is the one and only Anouska Hempel), and that unbelievably decorated couple from Canada, Hilary and Galen Weston.

The weekend ended with a splendid luncheon that Carol and Anthony Bamford gave for 60 guests at Daylesford House, one of the most magnificent country houses in all England. After that, everyone headed back to London for a dinner at the Tower of London on Sunday night. You will be thrilled to hear that everyone escaped with his head intact.

Elton John has announced that his first concert in China is scheduled for Shanghai in September, but the Rocket Man hasn’t forgotten his American friends and is arriving here on July 13 to benefit the Juilliard School and the Royal Academy of Music, where he studied from the age of 11. The concert is set for Radio City Music Hall and will be followed by a dinner chaired by Cornelia Guest and his partner, David Furnish, in the Rainbow Room with such American roses as Lauren Bush, Amanda Hearst, Gillian Hearst-Shaw, Lydia Hearst-Shaw, Eva Dillon and Elisabeth Kieselstein-Cord serving as junior chairmen. Among those expected are Renée Fleming, who will sing a duet with Elton on stage, Kimberly and Steven Rockefeller, William Ivey Long, Bettina Zilkha, Sharon Bush, Michele Klein and Cornelia’s brother, Freddy Guest, and his wife, Carole. Call Juilliard if you want to join them.