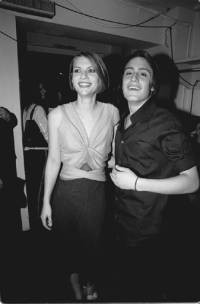 Claire Danes, who plays Meryl Streep’s daughter in “The Hours,” is thrilled to be working with the acting legend, who could be heading for a 13th Oscar for her beautiful performance in the new movie.

“Meryl has been my idol since I knew what acting was,” says Claire. “So I was so nervous to meet her, but she could not have made me feel more comfortable. At first I thought she would be really intellectual, but I found her to be sassy, funny and so authentic. And she has the best laugh in the business.” Thanks, Claire, for satisfying what inquiring minds need to know.

This inquiring mind has known how authentic Meryl is since —brand new to show biz years ago — she cartwheeled across the stage playing the relatively minor role of Dunyasha in Andre Seaban’s production of “The Cherry Orchard.” She practically gave off sparks. When I mentioned her star quality to the great late director Josh Logan, who had never heard of her, he said, “Fine, but she’ll have to change that funny name.” No, she didn’t have to.

Nicole Kidman, going against advice by masking her beauty with prosthetics — they hung a big false nose on her — and playing an older woman, also in “The Hours,” says she was intimidated playing the role of Virginia Woolf. “It’s rare you get to play a part of someone older, and people advised me against it repeatedly. I like when people say you shouldn’t do something. It entices me to go after it even more. If it’s in my gut, I have to do it.” Is that anything like sticking in your craw?

The ballroom of The Plaza was bedecked in yellow and gold for the Spanish Institute Gold Medal Gala, the lighting was flattering and the women were muy chic. That’s half the battle. The other half is the guests and “the” guest at this ball was the Spanish Duchess of Badajoz, the Infanta Dona Pilar, who flew from Madrid for the party with her three handsome sons, all Gomez-Acebos, Gomez-Acebo being one of the great names of Spain. Dona Pilar is the King of Spain’s sister and she looked like a king’s sister should — magnificent in royal blue. Her speech was short and sweet and to the point. She quoted her late husband, the Duke of Badajoz, who said in 1987 when he and she received the Gold Medal, “The Spanish Institute is a silver bridge between Spain and the United States.” That tells it all.

This year’s gold medal recipients were Evelyn Lauder (in a full-skirted Oscar de la Renta); Leslie de Polanco, the chairman of the media company Grupo Prisa, and Leopolo Rodes, the chairman of MPG, and their speeches were cortas and dulces also, gracias a Dios.

Among the elegant Spaniards, some of whom flew from Madrid, were Lula, the Marquesa de Esperanza; Mariluz Polanco; Pilar Puig; Carmen de Pinies in dark blue velvet (she is a dedicated member of the Institute’s board of directors); Barbara Caro (she is the Infanta’s daughter-in-law), and Rakela Ruperez, the wife of Spain’s ambassador to the U.S., Javier Ruperez.

In the crowd: Richard Meier, Alejandro and Andres Santo Domingo, Nati Abascal, Georgette Mosbacher, Spanish architect Santiago Calatrava and his wife Tina, Anthony Dobkin with lovely Palmer Bunn, Lauren Davis, Eugenia Silva, Jean Van Waveren and Dr. and Mrs. Fernando Aleu — he is the Institute’s chairman. They all danced and danced to Peter Duchin’s Orchestra. Peter, you know — or maybe you don’t — has just written a novel called “Blue Moon,” but more of that anon.

Diane Von Furstenberg’s downtown studio was fitting for a kickoff party for the Winter Antiques Show, and Diane broke off her huddled conversation on the couch with Graydon Carter to say a few words about East Side House Settlement. Graydon’s dandy, but business is business.

Diane and her husband, Barry Diller, are the chairmen of the Winter Antiques Show opening-night party at the Seventh Regiment Armory on Jan. 16, launching a 10-day-long engagement benefitting East Side House. Arie Kopelman, the chairman of the show, gave a little thank-you speech to Diane and Barry while Margaret Russell, the editor in chief of Elle Decor, looked on. Elle Decor, you see, is sponsoring the opening night.

The party was a sort of uptown-downtown mix. Calvin Klein, who celebrated his 60th birthday the night before, was looking like a slim ad for Calvin Klein, and Amanda Cutter Brooks was looking like a slim ad for Tuleh in a coat, pants and blouse. Emilia Fanjul Jr., it was learned, has become part of the Antiques Show group of Young Collectors, who will have their very own night at the Armory on Jan. 23.

Leonardo DiCaprio, hot, hot, hot, has met with producers about making his stage debut in London early next year. The play would be “This is Our Youth,” a three- character tragic comedy about New York’s yuppie culture in the Eighties. If Leo signs up, so might his pals Tobey Maguire and Kirsten Dunst to play the other two parts. These nights, it seems, you can’t settle for one without the other two real players.

Prince Rainier, 79, was hospitalized with a bad bronchial infection in Monte Carlo, so heir apparent Prince Albert filled in for daddy on Monaco’s National Day with hundreds of citizens gathered under the Pink Palace balcony cheering and waving flags. Albert and sisters Caroline and Stephanie waved right back. It’s about time.