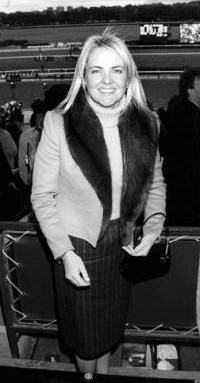 You will be thrilled to hear that Cornelia Guest, after hitting all the chic and stunning London parties, will be home to celebrate Thanksgiving with her mummy, C.Z. Guest, at the Guests’ Long Island estate, Templeton. Thanksgiving is also Cornelia’s birthday, so the day will be a delightful double whammy. This weekend, Cornelia will be off to Germany for a shoot. Not that she ever really actually shoots anything, even though some of her friends do. She is the animal lovers’ animal lover, and no one is more tickled than she is, now that England’s strict six-month animal quarantine will be rescinded next year. And soon she’ll be able to travel with her pets. Some say she’s already booked on the Concorde to take Nelson and Arthur, her two West Highland terriers, and Jackson, her rough-coated Jack Russell, just three of the pack of dogs she keeps at Templeton, back with her to her London house in fashionable Belgravia. Oh Cornelia, we’re all so happy for you, and Nelson and Arthur and Jackson. It’s time you all saw the world together.

Socially inclined mothers, and aren’t they all — most of them more bent over backwards than inclined — might want to go on even higher alert at the news that Camilla Parker Bowles’ nephew Ben Elliott, who has just wrapped up a year-long romance with Jade Jagger, Mick’s daughter, is on the loose and in New York City. The 27-year-old pal of Princes William and Harry is opening an office downtown at 80 Broad Street, as you read this, for his company called Quint Essentially, which has been a big success with London’s smart young set. The idea of this Internet company is to help its members secure reservations in the world’s trendiest restaurants, hotels, and, of course entrance into the right clubs. For a paltry $700 a year, you get the monthly and soon-to-be weekly newsletters that tell you all about the fashionable events and hot shows, and then you get into them. Camilla’s son Tom Parker Bowles writes restaurant reviews for the letter and is expected to come to town next year to try his hand at rating Manahattan’s boites. I can wait if you can.

Zara Phillips, Queen Elizabeth’s granddaughter who was named one of the 50 most beautiful people in the world last year by People magazine, has a new boyfriend, and her mother, Princess Anne approves. He is a 21-year-old jockey named Henry Oliver, and she has been seeing him steadily since the end of her three-year affair with Richard Johnson, another jockey. Henry, who began as a sturdy shoulder to cry on even though Zara had to lean way down to do so, has reportedly moved up and down from there. His father and sister are also jockeys. Apparently, the best way to get to Zara is on horseback.

Everybody in this social burg knows that during the high season — and it’s all high season here, friends — there are dozens of parties on the same night every night. So it’s no surprise that tonight, for instance, in no particular order there will be: 1) A farewell reception at the French Embassy on Fifth Avenue to say goodbye to French Ambassador Francois Bujon de l’Estang, whose tour of duty will come to an end next month. At the same reception, the ambassador will confer the prestigious Order of Arts and Letters on American filmmakers Ethan and Joel Coen. 2) Tycoon Barry Diller and fashion designer Diane Von Furstenberg, husband and wife, the honorary chairmen of the big opening night Winter Antiques Show, will give a kick-off party for the show at Diane’s downtown studio with swells mingling throughout. 3) The dashing Marchese Luca Cordero di Montezemolo, president of the Ferrari Maserati Group, is the host of a glamorous fete at the Four Seasons restaurant to celebrate “the return of Maserati” with new and vintage Maseratis on view on the esplanade of the Seagram building, with all sorts of Italian glitterati present, Robert Isabel decor in silver and blue and a big Hollywood celebrity at the Park Avenue entrance in a priceless Maserati, etc., etc., etc. 4) The Spanish Institute Gold Metal Gala will burst forth in all its glory at the Plaza with the honorary chairman, the King of Spain’s sister, the Infanta Dona Pilar de Borbon, Duchess of Badajoz in attendance along with some of her handsome grown-up children. The loveable chairmen of the evening are Emilia and Pepe Fanjul, Carolina and Reinaldo Herrera, Annette and Oscar de la Renta and Beatrice and Julio Santo Domingo.

The subject was jewels — in book and exhibition — at the party in the Forbes Galleries hosted by Forbes heir Kip to celebrate the publication of “Louis Comfort Tiffany at Tiffany & Co.” The book’s author, John Loring, who knows everything about Tiffany’s illustrious history, oversaw the exhibition of the first public showing of the world-famous artist’s jewelry in almost 70 years. John is just back from Brazil where he was entertained by the film, fashion and diplomatic elite of Rio and São Paulo, including such notables as Dom Joao de Orleans and Braganca, the grandson of the last Brazilian Emporer. Oh wow, John!

After the Forbes party, the gang went on to another party at Loring’s town house in Hell’s Kitchen for a family-style dinner, and that’s exactly what they had, Bill Blass’ designer meatloaf and two Tiffany boxes — not for jewels — but for dessert in the form of petits fours and ice cream colored Tiffany blue with the help of a little Curaçao liqueur. Oh wow, John!