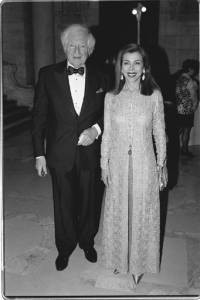 “She’s a working queen,” said Princess Firyal of Jordan, dressed head to foot in gold, as she introduced ravishing Queen Rania of Jordan, a vision in opera-red velvet to the standing-room-only crowd gathered in the Waldorf Ballroom for the International Rescue Committee Freedom Award Dinner. Rania is indeed a working queen, but there are other working queens in the world, though none so beautiful. Maybe Firyal described the queen like this because her looks belie getting up early in the morning in Amman, Jordan, pulling on her pants and setting out to do good work for her people — which she does almost daily. She is also an excellent speaker, even though Firyal, fast on her feet, is a hard act to follow.

She and financier Lionel Pincus were the chairmen of the IRC Dinner, where security was so tight and the Secret Service so stringent even a little mouse with a pea in its mouth couldn’t have crept through without being strip-searched.

After all, the place was swarming with big shots, the main man being President Hamid Karzai of Afghanistan, this year’s recipient of the IRC Freedom Medal for his extraordinary efforts in the cause of refugees and human freedom, which is what the IRC is all about.

Because the distinguished Karzai is regarded in some quarters as something of a fashion plate, it was no surprise that during his eloquent speech, all eyes were on the silken cape he wore. Striped in brilliant green and peacock blue, he wore it tossed-over-his-shoulders chic. He was introduced by his friend and admirer Christiane Amanpour, the TV journalist whose British-accented comments from the Middle East are heard by millions.

Moving right along, Tom Brokaw, the master of ceremonies interviewed Republican Sen. Sam Brownback of Kansas and Democratic Sen. Teddy Kennedy; John Whitehead, who received the Freedom Medal in 1987, spoke; everyone ate great slabs of beef and chocolate desserts, and then went home. Except Firyal, who, still in her evening dress, rushed to the airport, boarded a plane, changed into day clothes and flew off to Venice for a United Nations Conference the next morning. She, you see, is a working princess.

Speaking of Evelyn, she just received the French Legion of Honor at the French Consulate, the residence of Consul General and Mrs. Richard Duqué. The French ambassador to the U.S., Bujon de l’Estang himself, came from Washington to present the award “for outstanding service rendered to France or a feat befitting humanity.” Evelyn is an unflagging champion of breast cancer research through her Breast Cancer Research Foundation.

She is in good company. Only 10 Americans receive the Legion of Honor each year and only three husbands and wives have joined the order. Her husband, Leonard, was presented with the honor in 2001, and her mother-in-law, Estée, received hers in 1978.

All the Lauders were there for Evelyn — her sons William and Gary and their wives; Jo Carole and Ronald and such friends as Donna and Bill Acquavella, Liz and Damon Mezzacappa, Andrea and Charles Bronfman and Marshall Rose with his wife, Candice Bergen, whose French is parfait! Aren’t you glad?

The Lenox Hill Neighborhood House Holiday Bazaar will be held at Sotheby’s Dec. 5. The committee includes the organization’s president, Dianna Quasha; Tobi Roosevelt; Tobi’s sister Nancy Baker, who is the evening’s chairman, and John Rosselli and Nancy Wekselbaum, the honorary co-chairmen who gave a kick-off party at Scalamandre, where everyone sipped Veuve Clicquot and had a look at the festive pillows that will be auctioned off at the Bazaar. La!

Among the interior designers who have fashioned one-of-a-kind treasures are Albert Hadley, who used patterned silk with embroidered quilting and red suede scalloping on his pillow; Joanne de Guardiola, who used handwoven multicolored striped silk trimmed with bows and tulip tassels, and Lisa Jackson and Catherine Aaron, who covered their pillows in off-white and silvery beige patchwork silk velvet. Alexa Hampton, Jamie Drake, Matthew David, Albert Capraro and Nicole Miller all designed poufs for the auction. Get your pillows and poufs early.

You may have heard that Sir Elton John is set to be a guest star on TV’s “Will & Grace” later this season, but have you heard that he will not be wearing any of his outrageous prescription eye glasses on the show — or maybe ever again? Sir Elton is scheduled to have laser surgery in February so that he no longer has to keep looking for his misplaced specs. He only has several thousand pairs of which he will auction off to benefit the AIDS Foundation that he started in 1993. All the better for poring over the songs he’s writing for a new musical based on the film “Billy Elliot” about a young Welsh boy who becomes a ballet dancer.