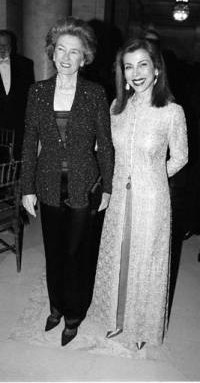 If you’ve heard this one already, don’t stop me because I want to hear it again myself. Nicole Kidman and Renée Zellweger are planning a very special Thanksgiving this year. Although they are in the countryside of Romania shooting a film about the American Civil War, adapted from the bestseller “Cold Mountain,” they are determined to make a traditional hot meal for the cast and crew, which includes their costar, Jude Law. Nic and Renée are flying in frozen turkeys and all the trimmings, which might have proven a bit tricky since the Balkan country has strict rules importing food stuffs.

But the girls have used their considerable charms to get their way — whatever that means. Renée will make her special stuffing and Nicole is tying on an apron to bake fresh biscuits. Lucky Jude has only to eat and ogle. Yes, yes, I know he’s married.

News from Monaco. Charlotte Casiraghi, the beautiful 16-year-old daughter of Princess Caroline, is fast becoming one of the best equestrians of her generation. She has an abiding passion for the sport and dreams of competing in the Olympics one day. While she was training for the Grand Prix in Le Mans, France, last week, she was thrown from her horse and knocked unconscious, giving her family a terrible scare. The more so because her father, Stefano Casiraghi, was killed in a speedboat competition 12 years ago. Charlotte recovered quickly and competed the very next day, but she was off her mark and didn’t do as well as she wished. Still, the very fact that she got back on her horse shows what she’s made of. Princess Grace, the grandmother she never knew, would have been proud. Just a thought — has Prince William ever met Charlotte Casiraghi?

What’s all this about Fergie’s wanting more children? She already has two daughters, Beatrice, 14, and Eugenie, 12 — but says that’s not enough and she may even adopt, with or without a husband. That might be a sticky wicket but that’s never stopped her before, has it?

It was all terribly swell at the New York Public Library Lions Benefit Gala Monday night, with such chairmen as Annette and Oscar de la Renta, Princess Firyal and Lionel Pincus, and Liz and Felix Rohatyn. Brooke Astor was the honorary chairman for the evening and 500 guests showed up to honor Pulitzer Prize-winning authors Robert A. Caro and David Levering Lewis, Tony Award winner Julie Taymor, and choreographer Christopher Wheeldon. The glamorous standouts of the evening were Princess Firyal, as ever, Lynn Nesbit and Eliza Reed Bolen.

The Irish Georgian Society’s dinner at the Union Club starred Ireland’s two famous Desmonds. Desmond Fitzgerald, who bears the picturesque title Knight of Glin, and the Hon. Desmond Guinness, Ireland’s conservationist without equal, brought out a group of elegant New Yorkers — all wearing a touch of green. Carleton Varney was the dinner chairman and his two sons, Nicholas and Sebastian, were his able co-chairmen. Among the invited guests were the Ambassador to Ireland Richard Egan, and his wife, Maureen; the real estate empress Caroline Rose Hunt of the Texas Hunts; Paige Rense and her artist husband, Kenneth Noland; Katherine Woodward Mellon, and Edwina Sandys and Richard Kaplan.

The decorations, all done by Carleton, involved shimmery green tablecloths and a silver candelabra topped with greens and white hydrangeas. The party was a benefit for the Irish Georgian Society’s reason for being — the conservation and preservation of the country’s architectural heritage. The society has renovated several Irish castles and country estates, and was founded by Desmond Guinness and his late wife, Mariga.

Princess Kalina of Bulgaria, 30, the youngest of former Bulgarian King Simeon’s five children, married Spanish explorer Kitin Muñoz in a traditional ceremony at the family’s palace in the lovely resort town of Borovets. Borovets is just south of the capital city Sofia and if you’ve never been there, you don’t know what you’ve missed.

The lovers met three years ago in Madrid, where he was taking a break after sailing across the Atlantic Ocean on a bamboo raft, emulating his hero Thor Heyerdahl. When he’s not doing that, he works as a goodwill ambassador to the United Nations.

The international list of wedding guests included such as the Infanta Cristina of Spain, Prince Nicholas of Greece and Frederick Windsor, the son of Prince and Princess Michael of Kent. The bride looked beautiful in a Bulgarian-designed gown worn with white sandals and a belt, typical of the Balkan country’s national dress. At dinner, delicious plates of skopska salad, moussaka and blueberry crepes were served. I love a really delicious plate of skopska salad, don’t you? No word of where the newlyweds went on their honeymoon. I’d love to say it was kayaking on the Black Sea, maybe, but I really don’t know.

Rudy Giuliani and his first lady, Judi Nathan, know a lot about good works. Last year, they were front and center at the Cabrini Mission Foundation Benefit. Tomorrow the Foundation will hold its annual awards dinner at Chelsea Piers and no one will be surprised if they drop by to show their support. Grace Hightower, wearing a gold and burgundy embroidered outfit by Anand Jon, will make her singing debut before the crowd. Mario Cuomo is expected and one of the evening’s chairmen is Kelsey Grammar. You all remember the socialite Kelsey Grammar.