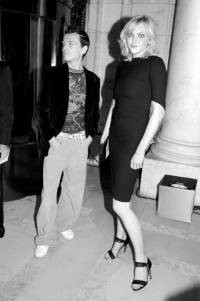 You don’t have to be British to get a load of Nicky Haslam. Although London, particularly amongst the most uppity of the upper classes, is where he most brilliantly shines. But he is also such a unique personality that he’s enjoyed and delighted the international set and New York for years, and New Yorkers who count — or think they do — have embraced him since the Sixties. One of the fascinating things about Nicky is you never know what he’s going to look like from day to day or night to night. He changes costumes as often as a clown: clothes, wigs, hairstyles, jewelry — anything to banish boredom and reap attention, sometimes the dandy and most recently in gear that would give a rock star pause.

Parties? He is a star at every lighted candle and when he appears, the candle burns brighter. Perhaps I should also mention that he is one of the most glamorous and stylish interior decorators in the world, with such clients as the British royalty and celebrities of all colors and stripes. He is that rare thing, an original. It’s easy to love Nicky Haslam.

Now he has just written his first book, “Sheer Opulence,” and the title tells it all: his decorating designs and secrets, his affinity for mosaic-gilt walls, linen carpets, silver-papered ceilings, slashed leather curtains and fabric footstools inspired by Picasso — the whole nine yards, gorgeous but eminently livable.

“Sheer Opulence” describes Nicky’s own life as well as his book. To celebrate its publication, a group of his friends from around the world filed into Swifty’s, invited by Douglas Cramer and Hugh Bush to come dressed Haslam inspired. That could be a challenge because these days Nicky tools around in torn jeans, ostrich boots and John Varvatos jackets with gold bracelets, chains galore, a diamond watch and spiked, dyed black hair. His youthful face sits atop his trim 63-year-old body, which, believe me, has been the toast of London and New York in various incarnations for 40 years.

At Swifty’s, there were pumpkins on the table filled with flowers, and English fare was served. Douglas Cramer, who loves producing parties now as much as he did TV hits like “Dynasty” and “The Love Boat,” and writer Hugh Bush, whose new Fifth Avenue duplex Nicky has just installed, hosted 38 Nicky lovers, many who were Concorde-ing off to London early the next morning with him.

Mica Ertegun, Anne Bass and Sophie Dahl were hard to miss, all in black and glitter and gold. True to the theme of the party, Reinaldo Herrera swept into the room — wearing a wild curly blond wig upstaging his wife, the ever-standing Carolina — to greet Lee Radziwill in Armani from head to toe and a very pregnant Sally, Countess of Albemarle, in a black satin creation by Jean Paul Gaultier, which sported a clever bow right atop the next-in-the-line of Albemarles. Would I exaggerate?

Just off the Concorde, London’s hottest producer Robert Fox (Dames Judi Dench and Maggie Smith star for him in the West End’s sold-out new David Hare play “The Breath of Life”) chatted up Nicky, and Joan Rivers, her diamonds glittering, kept Hugo Guinness and his wife, Elliott Puckett, Hamish Bowles, and John Richardson in stitches. Usually, it’s Richardson who does the stitching.

Lynn Nesbit, Gale Hayman and Duane Hampton kept asking Brooke Hayward Duchin if she’s still going to Venice for the big concert Dodie Rosekrans is planning in her elegant town house Dec. 28. Of course Brooke is — it’s in her honor.

Others enjoying the shepherd’s pie and pumpkin pie were John Varvatos, Alexandra Schoenberg and Julian Lethbridge. As toasts began, HRH Princess Michael of Kent breezed in wearing far more diamonds than either Joan or even Nicky put together, and wearing a long purple creation that all the ladies thought was a Valentino. The next day HRH was at the Metropolitan Museum speaking to a sold-out house about another royal, Charles II and his formidable mistress Nell Gwynn, who began her checkered career selling oranges and ended up with King Charlie.

As the French say, pas mal.

About Maggie Smith and Judi Dench and their big London hit: it has everybody calling their scalpers. You’ll be thrilled to know, that everything has been smooth sailing with the girls except for the petite contretemps over which dame was going to get the best dressing room. One is located just off stage, and the other is up three flights of stairs. Dame Maggie, who plays a retired curator living alone on the Isle of Wight, managed to charm the stage manager into the one downstairs, claiming that the one upstairs was jinxed. Dame Judi, who plays a popular novelist, seems to be doing just fine with the stairs. And there’s not a sign of bad luck anywhere at the smash hit that is running through Dec. 21 with talk of a Broadway run next year.

Speaking of books, Evelyn Lauder’s new best-selling book of wonderful photographs was celebrated at a three-day, three-night exhibition at the Pace-MacGill Galleries. Evelyn will donate all proceeds from the sale of “An Eye for Beauty” to the Breast Cancer Research Foundation. She’s just finished a month-long, eight-city book-signing tour and still has time to hold a symposium and lunch for 63 physicians and hundreds of women. How does she do it?