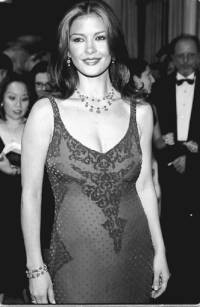 Catherine Zeta-Jones and Michael Douglas, expecting their second child — they already know it’s a girl — have decided to name her Zeta after Catherine’s Welsh grandmother, just as Catherine Zeta-Jones is herself. The Douglases are looking for another house for their growing family and they have their heart set on the landmark 300-year-old Hensol Castle in Vale of Glamorgan in Wales. It comes with more than 1,000 acres and is only 40 miles from Catherine’s parents’ house in Swansea. They’ve also had a look at Tredean House in South Wales, which has a tennis court and a heated pool, a must in South Wales.

Catherine is determined to be queen of a castle and the $4.5 million house they already have in Bermuda really doesn’t count. I’m with her.

Queen Elizabeth is planning a small dinner for family and friends at the Ritz in London on Nov. 14, a 54th birthday party for her son Prince Charles. Right on top of the guest list, which will also include her husband, Prince Philip, and her grandsons Prince William and Prince Harry, is the big news that Camilla Parker Bowles will be there. This is a step in the royal acceptance process of the well-documented romance. Eventually, Mrs. Parker Bowles charms everyone.

Approximately 100 guests have been invited to the party, which will be held in one of the Ritz’s grandest private ballrooms with Lady Elizabeth Anson overseeing all the delicious details. The Ritz, you remember, is where Camilla and Charles first appeared in public together in 1999 at a birthday party for Camilla’s sister. Princess Margaret had her 70th birthday party there that same year and the hotel has long been a favorite of Queen Elizabeth’s and Charles’. He even hosted a Christmas dinner there last year for his staff. The royals have put the “R” in putting on the Ritz.

You read here that the Baroness Philippine de Rothschild, the owner of Chateau Mouton Rothschild, a Bordeaux first growth and one of the world’s fine wines, was going to unveil her anticipated Chateau Mouton Rothschild 2000 vintage at a gala dinner and auction at New York’s Guggenheim Museum in the presence of former first lady of France Mme. Georges (Claude) Pompidou. Well, Philippine did and Claude came along with 250 others.

Six jeroboams of the new wine were sold at the party with jeroboam number one fetching $41,000 and going to Baroness Benjamin de Rothschild. Her husband, the Baron, is reputed to be the richest Rothschild alive today. That’s rich.

The superb dinner was prepared by the noted New York chef Daniel Bouloud of restaurant Daniel. A Mouton Rothschild was served with every course, naturellement.

The very next day, Veronica Hearst opened the doors of her opulent Fifth Avenue apartment — where the fine Italian hand of Renzo Mongiardino is everywhere evident — for a luncheon in honor of Mme. Pompidou. Mme. loves creative people, so the artists Jeff Koons and Frank Stella were there, along with Philippine of course, Prince and Princess Ernst August of Hanover (Charlotte of Monaco that was), the Honorable Anne Cox Chambers, Lee Radziwill, Hélène and Michel David-Weill, the noted French decorator Jacques Grange, the French Consul General and Mme. Duque, Austin Hearst, Liz Rohatyn, Simon de Pury and — comme ci, comme ça.

Lee Thaw’s cozy little dinner at Swifty’s was for Princess Michael of Kent, who was in New York to lecture at the Met Museum among other divertissements. Cozy is the word. Twenty guests were squeezed into a space for 10. You really get to know people that way. Lee asked friends from wherever, so long as they like to talk and the decibel level proved it. Pat Buckley was there and so were Consuelo Crespi, Olga Rostropovich, Marguerite Litman (she is the noted London hostess), Countess Elizabeth von Habsburg, Kartica Soekarno, the brilliant conversationalist John Richardson who knows the skinny on everyone, Count Geza von Habsburg, Kenny Lane, Victor Shafferman, Pete Hathaway, Toto Bergamo, Larry Lovett, Pierre Durand, Alex Hitz, Alexander Apsis, Sebastian Thaw, Victor Barcimento — and who’s left?

Check and Plan Attack on East 57th Street! Viscount and Viscountess Linley (David and Serena for short) are flying from London to New York for a week’s visit. They’ll be here Nov. 7 to celebrate the opening of the new Burberry flagship on East 57th Street. All 30,000 square feet of it. Inspired by the look of a New York town house, the smashing emporium looks just like one, it has six floors and will feature an English Tea Bar — because Burberry’s British, you know — so, of course, are the Linleys. Rose Marie Bravo, the merchant princess who made Burberry the rip-roaring success it is today, is an American, but she lives half the year in London and loves to drink tea. She’ll be at the opening, of course, because it’s one of the most dazzling moments of her dazzling career.