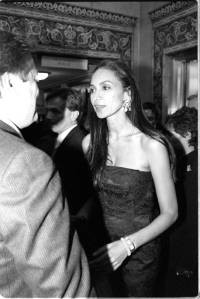 Interminable award shows, the big televised kind that need desperately to be vetted for vulgarity? (Hugh Grant, you are not funny.) Join the crowd.

By this time, everyone and his dog has won an award for something or other, usually forgotten the next day.

Sick to death of celebrities, boobs and bellybuttons? Jennifer Lopez, about the only one, was all covered up at the VH1/Vogue Fashion Awards in something the cat and Dolce & Gabbana dragged in. “This is my favorite skirt,” said Jen, showing off the flirty, short, white, pleated number that should only be worn by hipless teenagers or emaciated fashion models. It was enough to make you scream, bring back the boobs and bellybuttons, Jennifer.

On Tuesday the cultivati, the fashionati, the glitterati and the Francophilati will sweep into the Guggenheim Museum for what promises to be an international extravaganza. Baroness Philippine de Rothschild of the fine old French wine-making family is giving a gala dinner prepared by Daniel Bouloud with an auction after to celebrate the worldwide launch of Chateau Mouton Rothschild 2002. This will all take place in the presence of Mme. Georges (Claude) Pompidou, whose late husband was a former president of France. Mme. Pompidou lends her presence to only the most august of fetes. This one happens to be a benefit for American Friends of the Claude Pompidou Foundation — enough to warrant her flying over from Paris, wouldn’t you say? Baroness Philippine is the daughter of the late Baron Philippe, the founder of fabled vineyard Mouton Rothschild, whose fine wines are known worldwide. The new vintage bordeaux is said to be one of the greatest of the century. Five-thousand jeroboams (a jeroboam is equivalent to six bottles) have been produced and Serena Sutcliffe of Sotheby’s will auction a limited number of them at the party — collectors’ items, maybe. (On vera.) And, pardon my French, Lee Radziwill, a Francophile without peer, will be there.

The American Ballet Theatre opening night gala at City Center was a huge success. Artistically, the dancers are among the most talented in the world; fashion-wise, the ladies turned out in their most beautiful dresses, many designed by Escada, the chief underwriter of the evening, and financially, the performance and dinner afterward at the University Club raised $500,000, enough to keep everyone in leotards and toe shoes. The six chairmen were Muffie Potter Aston and Sherrell Aston, Julia and David Koch, and Grace and Chris Meigher. Just moments before the performance, the lobby at City Center was filled with a perfumed pack, including Susan Fales-Hill in a long black tiered confection, Grace Meigher in Escada’s black top with rhinestones and black pants, and Muffie Potter Aston in a cream satin bustier. Also caught up in the excitement were Blaine and Robert Trump, Emilia and Pepe Fanjul, principal dancers Irina Dvorovenko and Max Belotserkovsky, Julie Kent and Angel Corella.

And there were more — Tinsley and Topper Mortimer, Judy and Sam Peabody, Alejandro Santo Domingo and his beautiful model girlfriend, Eugenia da Silva. They’ve been quite an item for a number of months and decorate a room better than anyone you can think of.

The New York Society for the Prevention of Cruelty to Children honored Barbara Bush the other night for her hard work on its behalf. More than 500 guests came to praise her at the dinner dance at Chelsea Piers. The always charming and often provocative Barbara had the crowd howling when she told them, “I have had a wonderful life — two presidents in the family, five children, 15 grandchildren and only two dress sizes. My husband, the first George, was and is the greatest man of all.” Barbara was then escorted to the dance floor by her old friend from Hobe Sound and Greenwich days, Nelson Doubleday. They whirled around the dance floor to applause and to the strains of Bob Hardwick playing “The Man I Love.”

Doubleday was the publisher of Mrs. Bush’s three books, including her bestseller about her dog Millie. She said she is now working on her memoirs. This should be the best seller of all.

Tim Forbes of the Forbes dynasty gave a book party at Elaine’s for Christopher Buckley. That’s the clever, charming, witty, funny, sexy Christopher Buckley — and his new book “No Way to Treat a First Lady,” which has drawn rave reviews. Mummy and Daddy were there to congratulate Christo, as they call him, Mummy and Daddy being Mr. and Mrs. William F. Buckley Jr. Mummy Pat wore black pants and a yellow tunic.

“I hate yellow,” she said. But she wore it anyway. In the crowd were Jean and David Halberstam, Nancy and Henry Kissinger, Charlie Rose, Virginia and Freddy Melhado and other friends and avid fans too numerous to mention.

He redecorated the fabulous Sutton Place penthouse once owned by Winston and C.Z. Guest for Lisa and Richard Perry. You must have seen it slapped all over the pages of Vogue’s September issue.