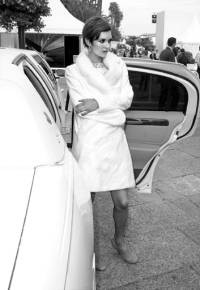 Renée Zellweger put her pretty little foot down when it came to gaining weight to star in the sequel to “Bridget Jones’ Diary.” The 33-year-old actress put on 21 pounds to play Bridget in the first movie and can’t face all the “changes” it put her through ever again. The writer, Andrew Davies, is making sure she doesn’t have to in the new flick that he is calling “Bridget Jones: The Edge of Reason.” By sending her to a jail in Thailand where unless someone smuggles in oodles of noodles, she’ll lose — not gain. (She’s already so thin you can’t see her from the side). George Clooney, with whom Renée had a fling not long ago, is cast in a cameo, another reason for looking her best on the set.

Happy news from London. Lady Helen Taylor, the daughter of the Duke and Duchess of Kent and a cousin of Queen Elizabeth, and her husband Tim are expecting their third child in the spring. They already have two darling boys: Columbus, 8, and Cassius, 5. Lady Helen, a lovely 38 who looks 28, is 25th in line to the throne.

Two weeks after the birth of her baby girl, Lila Grace, Kate Moss still hasn’t accepted the latest proposal from her lover and the father of her child, Jefferson Hack, who has been, according to English tabs, shopping for an eye-popper of a ring. Her pals Stella McCartney and Sadie Frost are hoping she says yes as they both like Jefferson ever so much, one reason being he has calmed Kate down considerably since her days with Johnny Depp, which now seem like ancient history.

Isabel Goldsmith, the heiress who inherited $50 million from her father, the tycoon Sir James Goldsmith, is planning to visit New York. She has told her friends that she would like to meet a man who is as comfortable in a dinner jacket as in a leather jacket and as happy at a formal function as a rock concert. There are plenty of local ladies looking for the same thing who will be unhappy to tell her she is shopping in the wrong place.

Madonna, whose horror film “Swept Away” hit a new low at the box office, is supposed to be shopping for a Broadway musical, and to prove it she is considering appearing in a variety show for a limited New York run. Whatever the case, she has been in more or less secret talks with one of her favorite choreographers, and if it all works out — and what a big if that is — she might hit town during the holidays. What she’s really supposed to be looking for is a show that can be turned into a movie. She must be kidding.

The Prince of Wales is building a second branch of “Club H” off the wine cellar of Clarence House in London for his sons William and Harry to dance in, far from the prying eyes of photographers. The original Club H is in Highgrove, the Prince’s country house where he loves to spend most of his leisure time.

The Prince, his boys and Camilla Parker Bowles will all move into the Clarence House, the former home of the late Queen Elizabeth, the Queen Mother next year with the blessings of Queen Elizabeth. Designer Robert Kime is helping Camilla redecorate the Queen Mother’s bedroom suite where she will stay. The prince will have his own suite because that’s the way it has always been. William and Harry will have their suite on the second floor. A cozy little palace for a happy little family.

Costume designer Lindy Hemming wants us to know that “Die Another Day,” the newest Bond flick due Nov. 22, is a fashion extravaganza like no other. “Fendi lent us 50 pieces of couture outfits and a lot of high-fashion gowns were borrowed from Amanda Wakeley, Jenny Packham and Escada,” she says.

“The best ‘borrow’ we did was persuading Donatella Versace to make a dress for Halle Berry in a style I had seen in a magazine. Tiffany lent us the jewels. Pierce Brosnan wears more Brioni than ever before. The shirts he wears are from Turnbull and Asser and his shoes are from Church. La Perla created Halle’s bikinis.”

The Frick Collection, one of the city’s exquisite treasure troves, is having an “Autumn Dinner” on Monday honoring Charlie Rose of your TV set and mine. Almost 300 guests are expected, including the museum’s Fellows and Young Fellows and so many of the people you know and love, like Amanda Burden, whom Charlie Rose knows and loves, Anne Cox Chambers, sculptor Bessie Strong-de Cuvas, Helen Clay Chase (she’s a Frick) and Martha Loring, who is not only a Frick but a Young Fellow to boot.

Need you be reminded that the Frick Collection was once the magnificent private home of titan Henry Clay Frick, who made his fortune in steel and oil and was nice enough to leave his glorious house on Fifth Avenue to the public when he died.