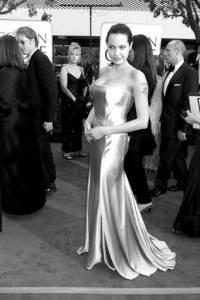 Two signs the love songs have ended in dear old Hollywood: Kim Basinger tossed her curls and turned a deaf ear to her husband Alec Baldwin’s pleas for a reconciliation over the past three weeks. Kim’s present life revolves around their seven-year-old daughter, Ireland, and her career, which has run the gamut from silver screen seductress to playing Eminem’s mother — not lover — in “8 Mile.” Is that good?

So, for the moment at least, there’s no room for anyone else, especially for a Baldwin rerun.

Ditto for Angelina Jolie, who reportedly has been hanging up when her husband, Billy Bob Thornton, calls wanting to get back together. Who knows why? She didn’t hang up but hung on like a leech while they were married, the aggressive one in their rather sick-making public displays of the get-a-room variety — all overdue for a burnout.

Angelina — enthralled with her newly adopted son, Maddox, her job as a goodwill ambassador to the United Nations High Commissioner for Refugees and her return role as Lara Croft in “Tomb Raider 2,” now filming in Hong Kong — also just closed the door on her rekindled affair with Jonny Lee Miller, another actor and another ex-husband. It just didn’t hold a candle to raiding the tomb.

It’s a time for exes. In London, Raine, Countess Spencer, the stepmother of Princess Diana, is currently seeing her ex-husband, 66-year-old Count Jean François de Chambrun, to whom she was briefly married after knowing him for little more than five weeks. Practically before the honeymoon was over, she realized he was as poor as a church mouse and that didn’t go down well with the tea and crumpets, although Raine is well-fixed for money and a wonderfully resourceful woman. She once referred to this marriage as a “silly mistake” but, nonetheless, she seems to have inherited the unshakable belief in happy endings of her mother, romance novelist Barbara Cartland. Good luck, dearie.

Athina Onassis, the daughter of the late Christina Onassis who will become the richest girl in the world when she inherits more than $1 billion of her mother’s Greek shipping fortune on her 18th birthday on Jan. 29, seems determined to share her good fortune. She personally organized a children’s party for more than 40 orphans from Lussy-Sur-Morges in Switzerland, where she lives with her father, Thierry Roussel. At the moment, Athina is training for next year’s Olympics in Greece, in which she hopes to ride. May she have a happier life than her mother, who, for all her money, never seemed to get it right.

Ralph Lauren’s pretty daughter, Dylan, may not have a billion dollars — yet — but she does have a big heart. She has turned over her ultradeluxe sweets emporium, Dylan’s Candy Bar, for the “Kids in Candyland” party on Feb. 10 to benefit the children’s programs at Lenox Hill Neighborhood House. Naturally, there will be face painting and cookie decorating but the thrill of it all is that the beautiful blond Miller heiress Princess Marie-Chantal of Greece will donate items from her exquisitely exclusive line of baby clothes for the goody bags. Goody goody!

Leading the parade to the party play date at Dylan’s will be the event chairmen Alexandra Kramer and Julie Dannenberg-Regel, who will pour Veuve Clicquot for the grownups and Slurpees for the kiddies. And that’s not all. On Feb. 5, the excitement will kick off at Chopard with a cocktail party and auction, where a watch for him and jewels for her will be sold to the highest bidder. The committee includes such photogenic photographers’ fodder as Renée Rockefeller, Aerin Lauder, Ginny Bond Donahue, Alexandra von Furstenberg and Lauren du Pont.

In Paris at the Jeu de Paume museum, Gianfranco Ferré hosted a glorious evening for the inauguration of his new boutique on the Avenue Montaigne. The soiree began with the designer’s dazzling spring ready-to-wear show. Models strutted down an egg-shaped catwalk — configured just as it is when Ferré presents at home in his salon at Via Pontaccio in Milan — as the audience sat in chairs Gianfranco had made especially for the show. A seated dinner followed with custom-made organza tablecloths, flowers by Christian Tortu and a delicious meal, French of course, catered by Potel & Chabot. Among the evening’s notables were Olivia Picasso, Sydney Picasso, Cécile Zilkha and her daughter Donna, Prince Pierre d’Arenberg, Countess Ruy Brandolini, Princess Anne de Borbon-Siciles, Baron and Baroness de Turckheim, Andrée Putman, Prince Michel de France, Anouk Aimee, Naomi Campbell, Nan Kempner — and yay! — of course, Denise Hale, Gianfranco’s muse, who wore the magnificent gray woolen coat completely encrusted with silver embroidery with his matching boots with silver heels. It’s the coat Gianfranco would have given to a museum if Denise hadn’t seen it first.

Deep in the heart of Texas, President George Herbert Walker Bush will preside as honorary chairman of a committee of distinguished Americans and world leaders when two outstanding Houston citizens, the Hon. Hushang Ansary and Dr. Denton Cooley, receive the Woodrow Wilson Awards in Houston on March 6. The Hon. Robert Mosbacher and his wife, Mica, are the chairmen of the very special and classy awards dinner. Classy and special because the committee includes such swells as Gov. George Pataki, New York banker Sanford (Sandy) Weill, Texas Gov. Rick Perry, Henry Kissinger (self-explanatory), James A. Baker 3rd and Frank Carlucci, a former Secretary of Defense.

Recipients of the prestigious awards are chosen by the Woodrow Wilson International Center for Scholars, a part of the Smithsonian and the U.S. government, established as a living memorial to President Woodrow Wilson. Hushang Ansary, a former Iranian ambassador to the U.S., is a generous contributor to such institutions as Harvard, the George Bush Presidential Library, the James Baker Institute for Public Policy, the Texas Heart Institute, Weill Cornell Medical College and the M.D. Anderson Cancer Center in Houston. Dr. Denton Cooley, the pride of Texas, is one of the most renowned heart surgeons in the world. Both men were chosen because of “extraordinary service in the American spirit and for their tireless work to improve the quality of American life through public service and corporate involvement.” Three rousing cheers and a great big yahoo, you all.