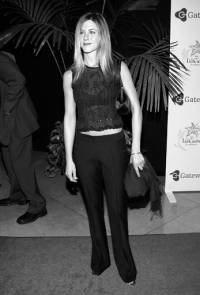 From the Have-I-Got-a-Girl-for-You Dep’t: Happily married to Babs Streisand himself, James Brolin had only his son Josh’s best interests at heart when he met Selma Blair on the set of “A Guy Thing” (MGM). Dad was so taken with the young star, who plays his daughter in the movie out next week, he couldn’t wait to call Josh with the thrilling news. “You have to meet her,” he said. “You don’t have to date her if you don’t want to, but you two have exactly the same sense of humor. You’d be good together.”

Yes, sir. Matchmaker dad is a really big fan. “Have you ever watched her humor?” he asked. “She’s a very sane nutcase. So is Josh. When the camera rolls, she goes crazy, but in a very organized way. She knows exactly what she’s doing and how to do it, and if she experiments, it’s without any shame. Selma Blair is somebody to watch.”

Gwyneth Paltrow and her rock star boyfriend Chris Martin are hot, hotter, hottest. Friends say she has even asked him to be her date at the Oscars on March 23. It’s not the sort of thing he usually does. But the word is he’s so crazy about her, especially after their holiday travels, that he’ll stop at nothing, or almost nothing. Gwyn is thrilled that Chris and his band Coldplay have decided to donate 10 percent of their earnings from concert ticket sales, recording royalties and even T-shirts to several needy causes. They are embarking on an American tour this month and expect to rake in $8 million this year alone. With Paltrow as their cheerleader, the sky’s the limit.

One of the highlights over the holidays at the yacht club in the beautiful new marina at Casa de Campo in the Dominican Republic was a party given by Venezuelan power couple Patty and Gustavo Cisneros for their house guest, none other than former president and recent Nobel Prize winner, Jimmy Carter, and his family — all 20-something of them!

Another anticipated celebration was the traditional New Year’s Eve dinner given by Casa de Campo owners, brothers Alfy and Pepe Fanjul, and Pepe’s wife, Emilia, at Casa Grande, their compound on the water. Among the guests were Arriana and Dixon Boardman, Wendy Vanderbilt and Dr. Frank Petito, Carol and George McFadden, Catie and Don Marron, Emilia and Brian Pfeifler, Lourdes and Pepe Fanjul Jr., Delores Smithies, Lian and Norberto Azqueta and baseball’s highest-paid player Alex “A-Rod” Rodriguez. Sally and David Metcalfe, and banker Alfonso Fierro and his wife, Marita, flew over from Europe. At midnight, the party continued at the marina’s Italian piazza, Piazza Portofino, where everyone danced the merengue and salsa until 5 a.m.

From the Better-Late-Than-Never Dep’t: When those 63 buds came out at the International Debutante Ball at the Waldorf with more than 1,000 guests looking on, they were dressed in pristine white by such as Chanel, Carolina Herrera, Vera Wang, Badgley Mischka, Dior, England’s Susan Neville and Austria’s royal family dressmaker. HRH Countess Elmeric de Habsburg led the receiving line, along with debutantes from France, England, Greece, Iceland, Italy and Scotland. Lady Alice Boyle, the daughter of the Earl and Countess of Glasgow, wore the family tartan, as Scottish lasses always do at this ball. Bowing from New York City was Alidia van Starkenborgh Clagett, who wore her grandmother’s ruby and diamond diadem in her upswept curls. Eight girls traveled across the country from California, including Alexandra Anne Thankful Agnew (love that name), great-granddaughter of Philip Barry. Twenty girls, the largest contingent from one state, came from Texas. As for Tennessee Hamilton, she comes from Chicago, despite her name. Her mother, Catharine, came out in 1967 and was an honorary chairman of this year’s ball.

Last but not least was Francesca Forrestal, the granddaughter of the late Secretary of the Navy, James V. Forrestal. Francesca wore her new gold ring. In her nose.

At Palm Beach’s stodgy Coconuts New Year’s Eve bash, it’s usually the same bunch of old names with new faces looking at each other. But this year, a big turnout had the Colony Hotel’s Pavilion bursting. Valet lines tied up traffic for blocks and inside, all the guests were getting a gander at Joan Collins, who showed up in red silk, a big diamond necklace and bigger cleavage.

Apart from the balloon drop — the Coconuts always drop balloons at midnight at these affairs — the übermoment was the late arrival of Pauline Pitt, sensational in a black beaded Badgley Mischka, marking her first return to the Coconuts since the death of her husband, Bill Pitt. Photographers swarmed her with an explosion of strobe flashes, causing one guest to remark, “Is Madonna here?” Madonna at the Coconuts? She should live so long.

Cece Cord, who — who doesn’t know by now? — designs dog togs with matching duds for their owners, has just finished her new cruise line called “Tiger Goes to Palm Beach,” named after her four-year-old Yorkie. Tiger just got a new punk hairdo and looks better than most of the punks we know. Cece and Tiger are off to Palm Beach soon, where Tiger will be sporting brightly colored raincoats in stripes and polkadots, and fluffy cotton sweaters for those breezy nights. And wait until you see the dog carriers and the matching purses that their mistresses will wear walking along Worth Avenue, Cece and Tiger hope. All this and more will be available at Bergdorf’s starting in February. I can wait if you can.

On Saturday night, Cece and jewelry designer Prince Dimitri of Yugoslavia will host the Carnegie Hall debut of the noted Vulcan countess Marina Arsenijevic, who is blonde, beautiful and talented. Among those expected at the champagne reception following at the Bubble Lounge are Karen LeFrak, Muffie Potter Aston, peripatetic Lydia Hearst with actor James Ginty and assorted ambassadors from Yugoslavia, Bulgaria and the United Nations.

Speaking of travels, Cornelia Guest and Prince Dimitri have just returned from spending the holidays in Carreyes, Mexico. The highlight of the visit was a lunch that Prince and Princess Pierre d’Arenberg gave at their stunning hacienda. There were 200 guests seated on the lawn at tables draped with white linen, including Jessica de Rothschild, Robert Hanson and several Goldsmiths. Now, Cornelia is at her London house but next week, it’s off to Milan for the Versace show, as a guest of Donatella, who else?

Jennifer Aniston gave her husband, Brad Pitt, a rare Tiffany glass student lamp designed by the famous Louis Comfort Tiffany to add to his ever-expanding collection of objets d’art. It was a Christmas present. I knew you’d want to know.